The House is a stop motion film presented on Netflix which tells three separate, non-related stories. The unifying element is that all take place in the same house, but in wildly different locals and situations.

And heard within, a lie is spun

This first story is about a family on hard times offered a newly built home by a mysterious benefactor. It quickly turns to gothic horror and can be interpreted in a number of ways. The characters are sort of fuzzy humans that seem to be made from lint.

The Lost is Truth that can't be Won

This one did not resonate with me much a t all. The characters are anthropogenic mice, the main one being some sort of real estate developer renovating a large house and trying to sell it. There is a bug problem and an open house where an interested couple just doesn't leave and an odd subplot of him making calls to a love interest that goes off in a direction I didn't expect. Grotesque imagery abounds and there is even a really weird dance number...

Listen again and seek the sun

This was the lightest offering of the three and again the main character is renovating the house but this time the actors are all cats and the house is sinking into a flooded landscape. The two renters don't actually pay rent and the owner simply can't see that the house is almost cause. A new age guru type arrives and turns everything on it's head. overall it's a positive and funny story but the hippy dippy characters are more annoying to me by the end.

Worth seeing? Sure, the animation is mazing and the voice work well done. The stories were super weird, something normally like, but rambled a little much for me to get too involved. So maybe a B or B- for this one. 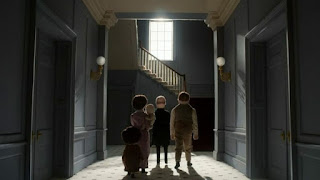 Posted by Behemoth media at 4:41 AM