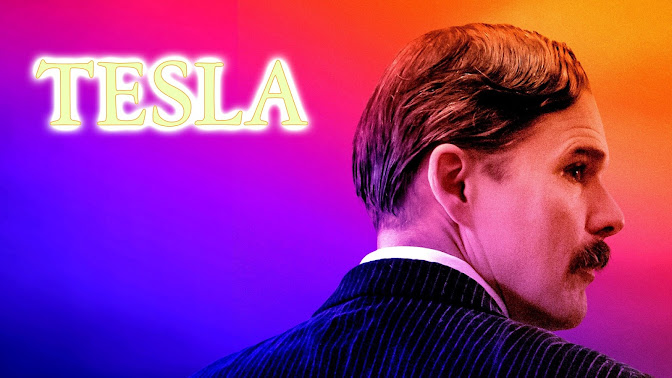 I fully prepared to fall asleep during this movie... not sure why I had that attitude because it flew by as I watched it. Not that it was action packed but because it's slow pace works so well with the performances and odd editing and anachronistic touches keep your attention flowing along with it.

I thought this was going to be a dramatic telling of the life of the inventor Tesla and a period piece. It isn't exactly that. It is more like a documentary with enactments told by one of the historical figures in the story, Ann Morgan (Eve Hewson). Her character swings between a being present in the story of Tesla and modern day where she is using a computer to search for information on the other historical figures throughout the film. The editing is pretty brilliant... cutting between complete period recreations to actors superimposed in front of period images to standard documentary techniques like panning across photos.

It works.. somehow. The actors are all super. Ethan Hawke as Tesla starts  was so unlikeable that I wondered if this was going to be one I had to abandon part way through but he really manages to grow on you and open the character up. Kyle MacLachlan plays Edison and I totally bought him in the role.

A big plus for this movie is how it doesn't worship Tesla and overplay his achievements which was amazing and important but he also made some unsupported leaps of logic with devices that were less than successful. This may or may not give a reality  based portrayal of the great inventor but it does come off that way.

Posted by Behemoth media at 2:54 PM