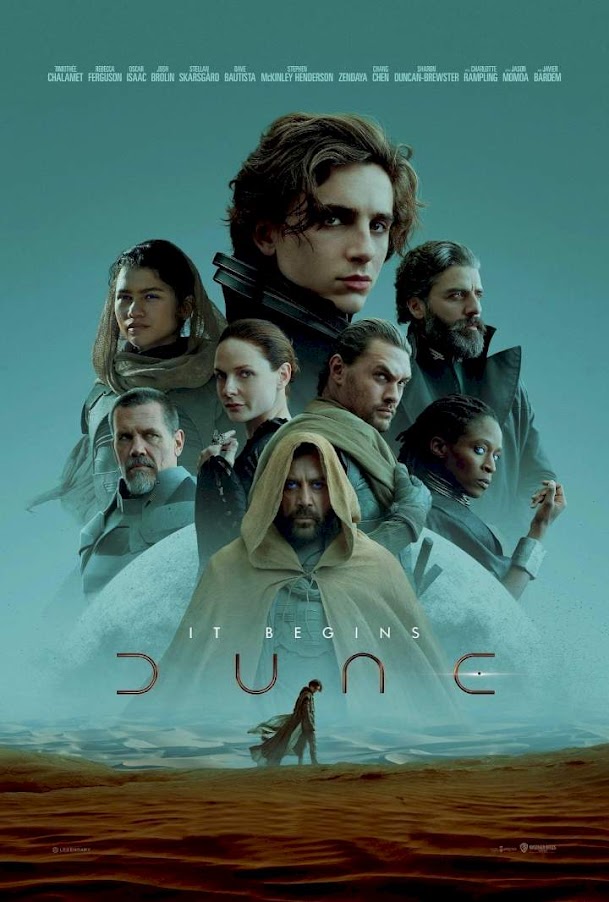 I have read the source material for this film at least 3 times and the next two books that followed it at least twice each and then the 4th book once (which was enough of that). SO I am fairly familiar with the story and what to expect. I have seen the Lynch attempt at the story and the Sci-fi channel mini-series. Lynch's movie was a mess of good and some very bad and I don't get the trend to try and turn it into some sort of misunderstood classic. It's not. The Mini-series took the hard sci-fi approach with a much lower budget and while I thought it was fine, I forgot what I saw a couple of days afterwards, it didn't really capture the novel any more than Lynch did.

Now Denis Villeneuve has had his try and I have to say I found it very compelling. Visually stunning and  doesn't defer to the lowest common denominator by turning into a Star Wars wannabe or superhero origin story. He keeps true to the book as much as I would expect a film adaption to do. Reading and watching are very different beasts and he knows that and takes the opportunity to show as much as possible and keeps the telling, or explain part to a minimum without, I don't think, making it too difficult for anyone who hasn't read the book. There are a lot of characters and some of the main ones... quite few of the main ones die before this part one ends. Others are introduced but he takes the chance of waiting to do more with them in the second part. It won't placate the more rabid of Frank Herbert fans, but that is fool's errand anyway.

The casting worked out better than I predicted. Timothée Chalamet looks young enough to be the main character and Oscar Issac gets little to do in terms of character development but works well as Paul's father. Jason Momoa seemed a mistake, but his short role worked as well and didn't take me out of the movie. Josh Brolin stood out in his role for me. He seemed to get across a lot of character points with limited screen time. Another thing I liked was that the bad guys, while over the top in many ways didn’t fall into the trope of making them ”gay” to add to their perverseness as the 80s version did.

Technically, the movie shines. Visually it was amazing on the big screen. I did think the music was a little over the top at times and too in your face but it does it's job. The design of the world is breath taking. The ornithopters looking like mechanical dragonflies were easy to imagine in my mind while reading but they look much better and more real than in my imagination. In fact, most of the effects are shown in a very realistic light. Each shot is a work of art but everything is treated like a real place/object. Camera positions are mostly at human height  or seem to be positioned on walls or rocket nearby with none of the over the top video game/drone tracking shots that are FAR too common these days in big films. The overall tone of the performances is somewhat cold but I got that impression of the characters in the books as well. The handling of dreams and some of the magical-like elements were handled  superbly and when "the voice" was used in couple spot, some audience members jumped.

If you want a plot summary... read the book... it's way too complicated to pare down for this review. That makes this movie even more of success. It manages to move along and tell that complicated story at pace that allows the viewer to take it all in. Even the action scenes are paced slower and are easier to understand  than the typical action film. It doesn't throw the kitchen sink and all the other appliances at you at once but you end up with a fully functioning kitchen at the end with everything in it place for part two.

That fact that this is part one is something to consider before going. it will be 2 years before it comes out and while this movie tells a great story it took a huge risk in not trying to give it a false ending in case there was no second film, it stops at a logical point but it's painfully obvious there is MUCH more coming up. I look forward to it.

Posted by Behemoth media at 8:48 AM