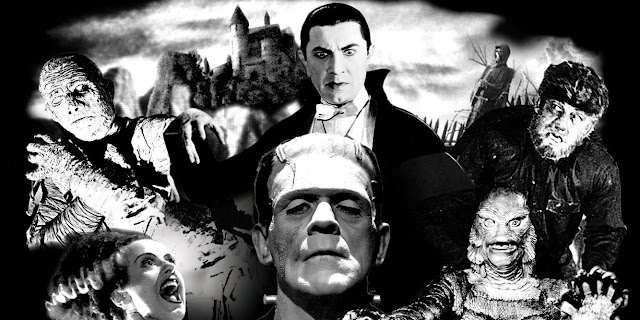 It was inevitable that the success of Marvel’s superhero universe would spawn others from other studios. When Universal made it clear they were going to jump into it with a monster-verse it seemed like a really great idea. As this plan has rolled out and revised with the failure of each film slated to be the « start » of the Dark Universe, it seems clear that modern Universal studios hasn't a clue what they are doing.

It can be argued that Universal started the whole connected film series thing and already had a universe of films starting from 1923’s Hunchback of Notre Dame up to 1960’s The Leech Woman - which is quite a long run. While not all those films were classics, to say the least, many of them were and quite a few more were good, fun films. They were doing mash-ups before the word was invented and relating sequels and combining storylines in ways no one else had thought of doing. Those ideas ran their course, the pubic opinion of them changed and the loosely related series was abandoned… until recently.

They remade Dracula with Braodway heartthrob Frank Langella successfully in the 70s but in the 2000’s they came back in force with the Mummy series starring Brendon Fraser and seemed poised for another long run with their remake of the Wolfman in 2010 - which had so much potential but in the end turned out to be something like the original Hulk movie but with werewolves. They did many of the right things - the victorian setting, the makeup by Rick Baker was astounding - and then replaced it mostly by lame CGI. The film had the look but not the soul of a classic gothic horror film worthy of their legacy.

It got much worse with Dracula Untold - which will not be spoken of. These films, first stated as the start of the new series of gothic horror classic updates were so bad they were quickly dismissed and all hope was set on the 2017 version of the Mummy, another flop in most senses. They had done this before… why are they so off-base now?

I think the decision to go CGI in the Wolfman says a lot. Apparently, marketing wanted CGI because you know, the kids like that sort of thing - even thought film did not need or call for it. Kids want to see good movies, they don’t really care how the monsters are made, just that they look cool and work in the film. The attempt to modernize the old stories for today’s audiences isn’t a bad one, though the gothic victorian nature of the source material does limit how modern it can be and still work. Already having decided to keep the stories in the past they were sort of stuck with that idea, but even that could have been handled by setting a new film, let's say the Mummy, in today’s world then re-introducing the other characters in present day later on… most of them are immortal monsters after-all! There is so much opportunity and life left in these old stories that even going back to original stories and novels and simply updating them could have been fantastic.

Another problem is the idea these creatures are « like superheroes ». Yes, they have amazing powers, sure enough - but the rules and origins of those powers are literally in another universe than those of Marvel’s line up. Plus, they need to be frightening, not heroic. They need to be creepy, not funny. The Fraser Mummy series was light hearted and worked, but keeping that formula for the rest of the classic line up is just not tenable, in my opinion. Don’t be chasing Disney’s audience, create a new one based not on wholesome family faire but scary and with their gothic sensibilities intact. They don’t have to be R-rated, super violent or sex filled, just add enough of that stuff to keep modern cinephiles on their toes. Keep the elements that made these movies work in the first place and stop thinking of them as action films with creatures that in almost no way resemble their origins. The lore of monsters is not about action and more about what we fear, a way to point out it’s often we who are the monsters and the creatures, our victims. Create NEW monsters that fit into this new horrifying world and don’t rely solely on known properties. The biggest problem with the current crop of Universal Dark Universe flicks is the complete lack of risk they take with them.

Oddly, the best updated gothic horror films are not coming from the old studio. If the trailers and advance reviews of The Shape of Water pan out. Guilermo del Toro, more than anyone else with this new film, added to others like, Crimson Peak, Pan’s Labyrinth or even Mimic, shows he knows exactly what works and how to produce the films Universal should be. His films expand the gothic horror sensibility to today, take risks and mange to touch, inform and scare the pants of us that I am afraid none of the Dark Universe will even come close to doing.

Universal has a done a great job presenting and restoring the old films, I wish they could apply some of that talent to producing new ones.
Posted by Behemoth media at 10:54 AM

You know, before I read this, I didn't equate Del Toro with gothic horror, but it's kind of a perfect fit. I bet he'd do a hell of a Universal film. As to this whole franchise thing, I'm tired of them. Very tired. And really, these movies work the best when there's just ONE horrible, strange creature. When you start to have leagues, or team-ups or the like, they lose their feeling of being special. "Underworld" is a good example. I enjoyed the first one, though in a trashy way. When you have leagues of these things, you can't help but wonder why they don't run things, are in politics, etc. Better to just have one and deal with that. Universal will likely soon give up and we'll all be the better for it.

I often thin the same thing. The Avengers could easily stop all war, most crime, hunger and save millions from natural disasters. The Ironman tech alone could get us of fossil fuels and polluting in an instant. Superman could do most of that all alone. I have news for you though, the monsters are already in politics!