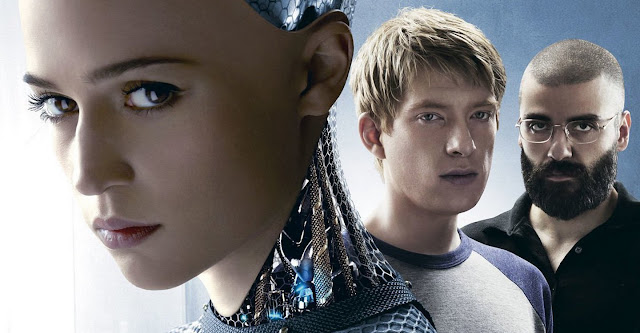 This is another example of an independent smaller budget film out-doing pretty much all the larger budgeted films made recently. made for only 15 million, the movie still manages to have spectacular, realistic effects that enhance the story and so natural looking you easily forget they are effects at all.

When a programmer (Caleb) in a Google-like company wins a contest to spend a week with the companies reclusive genius owner (Nathan) he is flown to a remote location where he learns he is there to determine if the latest attempt at artificial intelligence has achieved consciousness.

The AI is housed in a super realistic android, complete with facial expressions and the ability to cross examen her interrogator in ways that make him question his own humanity.

Convinced that the AI (Ava) is not only conscience but in love with him, he hatches a plan to help her escape only to discover she has been in cahoots with Nathan as part of the test. Unfortunately for Nathan, Caleb had anticipated he was being watched and did the steps to make the escape possible while Nathan was passed out drunk the day before. So Ava is able to exit her small living area, conspire with another android whom Nathan has been abusive to and they kill him and lock Caleb into the complex… leaving him to die, presumably.

This is one of those films that inspires conversation and keeps your attention with interesting characters and ideas over action. It’s a true hard sci-fi film that succeeds on almost every level. The acting is great and while the character of Nathan is a total douche-bag, you don’t particularly want him to die. Caleb is, of course, very sympathetic and leaving him trapped in the compound alone makes sense from Ava’s point of view since if he was to escape as well, the world could find out what she is. It’s a cruel decision a standard « Hollywood style » would never go near.

The ending is (probably deliberately) ambiguous. Ava is in the real world and we have no idea what comes next.

I find it hard to believe she would be able to walk around free for long, however. The owner of a Google-like company, no matter how reclusive he is can’t just disappear without someone coming to look for him sooner than later. Caleb might have had no family or girlfriend, but he did have friends at work, an apartment to pay for and was well known to have a won the competition to the compound -so after being a couple days late coming home, plenty of people would have insisted the police go looking for him. Once there, they would have seen the other robot models, maybe the videos of what happened and Nathan’s dead body. Possibly Caleb would be able to hang on long enough to be saved. Food and other supplies must be delivered there on a regular basis as well - so maybe AVA is less cruel than originally appearing to be. It’s also a little too far to think that while looking real, that Ava would feel real as well. You might buy that the special skin covering can move like the real thing, but a little more hard to believe it would be warm, humid and have all the rest of the characteristic real skin have.

I would have liked to have some indication as to why Nathan drank so much as well. He didn't appear to be simply alcoholic but had something driving him to it. Loneliness? Guilt about what he was creating? Some indication that he was more than just an unpleasant egoist might have added more humanity to the film.

Still, the film is amazing, complex and thought provoking. Well worth seeing. 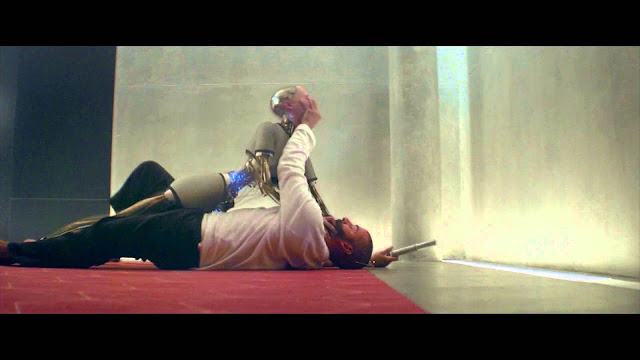 Posted by Behemoth media at 3:20 PM

Saw this in the theater, I think on many friends' recommendations and I agree; it was a LOT better than a good deal of everything that Hollywood put out that year. For another movie that does the same thing, and is also deeply in the, "I can't believe he got money to make this thing" category, go see Darren Aronofsky's recent, "Mother!" Went and saw it and, while I don't know if I LIKE it, I think it was important in its way and I'm glad I saw it.

Mother seems to be a on of those films that is driving people nuts, considered by many to be one of the worse films ever, nevertheless, no one can stop talking about it and what it means. To me, that says it might bene of the best films out there! He has made some amazing films before (not NOAH though LOL) so tend to think he knows what he wants to do.

It is certainly NOT the worst film ever, of the year or any of that. What it is is hard to understand and, in some ways, difficult to watch. That being said, it's allegory and a mirror to the human condition as a whole. And it's not a pretty picture. The fact that people are seeing it AND talking about it is a good thing. I still don't want to see it again, but I'm glad I saw it. See it if you can. Would make a great entry here. I'd write about it, but I haven't come to terms with it and don't want to re-watch.