The Creature from the Black lagoon

The Creature from the Black Lagoon
was maybe the last of the classic Universal monsters to be created. Released in 1954 in 3D, it was a success and contemned to be re-released in various forms - both 2D and 3D - for decades to come. It's screeching theme music (which must be played 100s of times during the course of the film) is truly iconic and always gets a reaction from audiences. The popularity of the creature got it not one but two sequels and while remakes have been rumoured for decades, the soon to be released The Shape of Water looks like the reboot fans of the monster have been waiting for, but for legal reasons, it isn't technically the creature from the black lagoon. 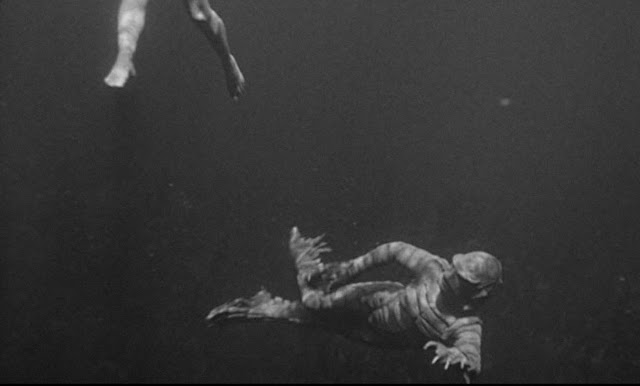 After a scientific expedition discovers a fossilized hand of an amphibious human like  animal - another group goes to the Amazon to discover more about it, only to find out there is still one of the things swimming around in the titular black lagoon. The gill-man kills off most of the crew and manages to develop a crush on girl scientist Kay Lawrence. (The 1950s, while known for a certain sexism, always seem to have female scientists as bait for monsters but also they always show competence in their fields - which I suppose can be taken as a positive aspect of these films.) Of course the creature's lust becomes it's downfall and after being shot multiple times, sinks to the depths of the lagoon only to rise again in the sequel.

The Revenge of the Creature.
Haven't not been killed by bullets in the first film afterall, the monster is captured and taken to the Ocean Harbour Oceanarium in Florida where he, of course, escapes, developed another girl crush and while dragging her into the sea gets once again shot by bullets until he releases her. This 1955 film was also released in 3D but didn't capture the public's imagination, or the critics praise nearly as much as the first film. The creature did, however, walk again.

The Creature Walks Among Us,
released in 2D only in 1956, takes up right after the last film left off. A group of scientists from the oceanarium led by jealous misogynist Dr. William Barton along with his wife recapture the creature who is badly burned  in the process and taken back to the oceanarium. While there he begins to transform into something more human and is therefore given clothing.... OK I don't get it either. In any case, the jealous Doctor kills a colleague he thinks is going in on his life, and shifts blame for the murder to the gill-man. The evolving creature is not happy being a scapegoat and goes on a rampage, eventually making it to the ocean where, because he no longer has gills, seems to drown himself. This film isn't as bad as it sounds and does give us some sympathy for the creature not present in the first two movies.

The production of these films is as spotty as you might imagine but the design of the creature is stunning. Much harder to pull off than Dracula, Frankenstein or even the Wolfman - the costume is really well done and truly scary looking. The underwater shots are wonderfully composed and executed. The scene from the first film where the creature teases Kay by swimming directly under her is both captivating and terrifying. By the time of The Creature Walks Among Us, the new look of the gill-man seems cheap and has transformed him into something more human and oddly enough, less relatable.
Posted by Behemoth media at 2:17 PM

I recently watched a short documentary on YouTube about one of the men who wore the suit (I think there were three in general). This was the guy who appeared whenever the gill-man was out of the water at all. There was a professional diver who did all the underwater scenes. He said the suit was remarkably light and comfortable, which isn't what I would have thought at all. This, like King Kong was a rare, fully new, made-up monster with mass appeal. I think you will find that the upcoming 'Water' movie is a lot less about a connection to the Creature, and a great deal more to do with the character of Abe Sapien from "Hellboy," which of course was likely inspired by the Creature. Del Toro wanted to keep doing stuff with Hellboy but couldn't, so made his own 'origin of Sapien' story, though it's NOT Sapien (because of copyrights). It's got good press so far.

I think the new film is mostly a guy in a costume as well which is really encouraging. I just assumes the original creature suit was a nightmare to wear... just makes it even more amazing that managed to make it comfortable as well as original.