Farrah, Our Thoughts Are With You 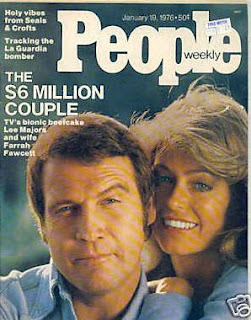 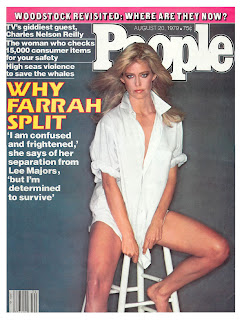 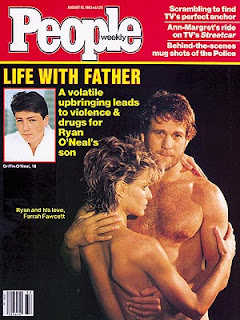 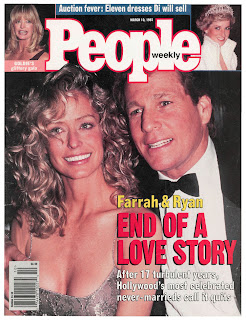 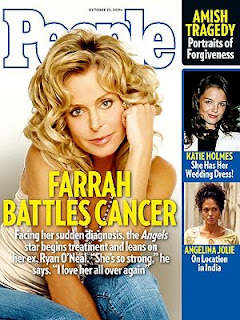 As a kid, I wasn't allowed to watch MAUDE because my parents thought it was too controversial, which only made me want to watch it more. I became a big fan of Bea Arthur and even enjoyed her work in GOLDEN GIRLS. In memory of her more scandalous times, here's a video of Bea and the Rock singing about recreational drug use. 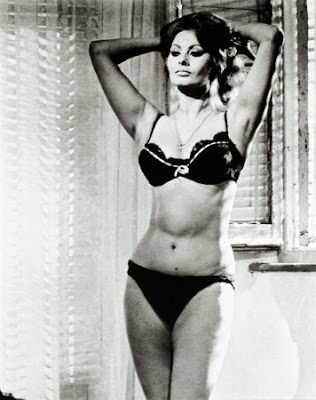 Widened the main column fellow inmates - if it's not looking right - write to me.
Posted by glyphjockey at 3:56 PM 3 comments:

Ken Annakin director of most of the Huggetts films and Swiss Family Robinson has gone from this section of the time space continuum.

Here's Petula Clark from a couple of Huggets films:

Here's a link to the whole (damn) playlist

Thanks Tony
Posted by Donna Lethal at 10:01 PM 1 comment:

Last Friday, Donna and I saw Jackie Joseph walking around at a TV Industry event and I informed DL "that's Audrey from Corman's Little Shop of Horrors and 'Melody' from Josie & The Pussycats." We heard her giggle to the folks in front of us and got a bit of that old Melody charm. I so wanted to call her a "bubble head" in my best bitchy Alexandra (Sherry Alberoni) voice - or ask her to leave my outgoing cel phone message, but I didn't. These people are superstars to me. They taught me how to run from villains to a pop beat - and for that I will be forever grateful. Did you know that if you and your friends stop, freeze and pose like a statue - the bad guys will think you ARE a statue and just run past you? It's true.

Ps - The cartoon's Josie voice was done by Janet Waldo (she played the annoying teen spaz who loved Ricky Ricardo on I Love Lucy. Her voice grates on me. She was also frantic teen Judy Jetson).

The singers for J&PCs: Cathy Dougher (Josie) and Patrice Holloway (Valerie) and Cherie Moor aka Cheryl Ladd (Melody). Holloway actually did most of the heavy lifting on the vocals. Thanks to Rhino Records I can listen to their hits as I drive around town.

Posted by glyphjockey at 9:33 PM 2 comments:

I don't know what to say about this...

Not for the faint of heart, here's an almost-complete collection of current tv and radio safety spots.

"How do you expect to get a husband, flying around all the time?"
Posted by Donna Lethal at 1:56 PM 2 comments: 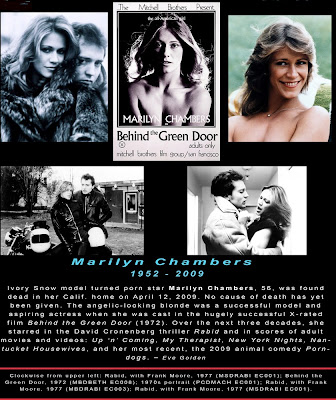 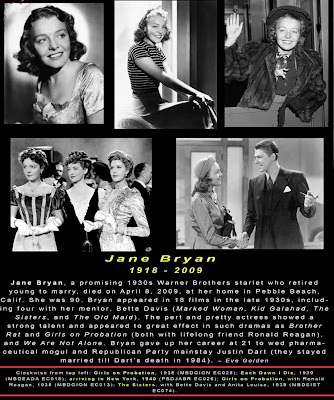 Posted by Donna Lethal at 2:04 PM No comments:

Honestly, there's nothing I can add to this.

Great trivia question: What movie did Raquel Welch and Jodie Foster appear in together?

Another regular Slammer favorite, check out this Munsters episode featuring Harvey, courtesy of Classic Television Showbiz, where you can find the rest of the show.

Since she is a Slammer favorite, I'm reposting my today's dose here:

She needs a trip to the Bionic Beauty Salon Hospital. And that kid of hers isn't any help ... getting busted in the parking lot! Charlie needs to get in there and sort that lot out. I met Ryan O'Neal once on my way to the dentist. He was super nice and gave me that 'surprised-raised-eyebrow-don't-I-know-you-thing' that I get because I look like I should be someone, but I'm not. It's really disappointing when I go to events, because I've actually heard people go, "Oh, she's nobody." (And you wonder why famous people go crazy out here when they stop being famous!)

and Farrah on the Dating Game: 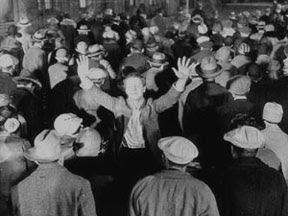 This film is one of the all time classics of cinema. Made in 1928, it follows the life of a «nobody» born on July 4 who has asperations of grand things in his life. Wherever he goes, whatever he does, he does not really distinguish himself from the crowd or society, which in this film becomes a character in of itself, always present and taking away his space, always surrounding him and restricting his movements in some way.

The lead character is (played by James Murry) and, in fact, the whole story is morally ambiguous. He seems a total egotisical jerk really, concerned only with his own delusions that he is better than everyone else. Somehow... he has no clear idea how or why. His life is a mess and so tragic you can’t help but feel not only sorry for him but for yourself. Who amoung us hasn’t has big dreams only to find they were in fact, impossible to reach no matter what efforts made? He and us all have to learn to live in the world we get, not the one the one we wish we could live in. As a result, the film is thoughtfully indifferent to him all the way to the happy/bitter end.

Visually, the direction by King Vidor is outstanding and the effects top-of-the-line. Some fo the images so powerful they stick on your head long after the film is done. For me the shot of the parents in the window watching helplessly as thier daughter is accidently hit by traffic, the father moments ago waving a doll he bought her now slumped against the window with the doll hanging lifeless in his hand show just how powerful silent films were and still are to those of us open enough to watch them. Director Jean Luc Godard was asked once why films about ordinary people were not being made. He responded with "Why remake «The Crowd?» It has already been done".

The one terrible thing about this film is that, somehow, it is not on DVD.The lack of certain films updated and restored to the current format is, in my opinion, an abuse of the film going public. In fact only recently did we get good copies of «Metrolpolis» (which will be updated further with 10 minutes of newly found footage I have heard) and «Pandora’s Box». Who knows when or even if this film will be in our homes in the future.
Posted by Behemoth media at 11:46 AM 4 comments:

Sharon Tate In The Wrecking Crew

I recently did a post at my Dino Lounge blog about The Wrecking Crew, the last of the Matt Helm spy flicks which starred Dean Martin. One of Dino's co-stars in that film was Sharon Tate. I came across a couple of tribute videos someone did featuring Sharon Tate. These clips feature screenshots from the movie. I thought they were really cool. I thought I would share them with everybody here. I hope you enjoy them. Let me know what you think. Cheers!

The Lady Loves Him

Ann-Margret (who dated Elvis for a year) talks about Elvis - February 11, 1994.
The interview kind of fizzles - but mid way thru A-M shares what she loved about Elvis. 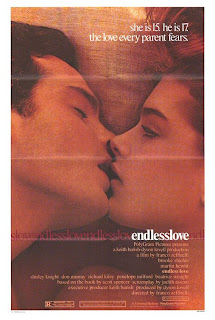 This song creeps me out. It takes me back to 1981 and that movie about fifteen-year-old (looking about 12) Brooke Shields getting deflowered by an older dude, while her cool mom catches a glimpse and then sits and watches them from the stairs. Mom is shocked, embarrassed then caught up in her own memories of young passion. ewwww. Lady, it's your daughter for chrissakes! Leave it to Franco Zeffirelli - he loved filming those nubile actors (and you wonder why Brooke doesn't speak to her former agent/mama anymore?).

Atleast the intellectual, artsy family pays for their progressiveness later on in the film- when the volatile boyfriend sets their house on fire. Good Times.

For me, the song makes me feel like an awkward pimply teenager with feathered hair, braces and lots to learn. Ugh! Please anything but that time again !! Now I know what The Dashers meant in Female Trouble about never wanting to be caught in any of those "ludicrous positions."

The song is even creepier when a young teen sings it -- example: Andrea ('Annie #1') McArdle on The Merv Griffin Show.

post script: Endless Love would pretty much be Brooke Shield's swan song to her string of nymphette roles that she had been doing since 1978's Pretty Baby (when she was 12). Endless Love was panned despite the hit theme song. Her film career tanked but she was paid $1 million in 1981 to endorse Wella Balsam shampoo and even more for those Calvin Klein ads. She stayed famous and cutesy thanks to Bob Hope's NBC Specials while she was on school vacations from Princeton. She was able to re-invent herself as a normal person in the NBC sitcom Suddenly Susan in 1996. Her endless lover Martin Hewitt would eventually star in 1990's Skinemax indie film erotica and scattered tv guest shots through 2003. He is now age 51 with a wife and 2 kids and in the home inspection business.
Posted by Pantheon Zeus at 12:24 AM 2 comments:

By train and tugboat

or if a boat isn't available, a Rolls Royce and Prop Plane will do
(go to 6:00 mark)

Posted by Pantheon Zeus at 9:23 PM No comments:

So Bad it's Good 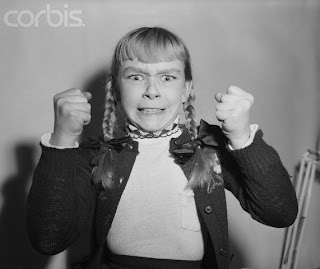 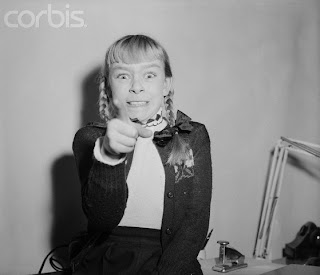 Original caption: Patricia Ellen McCormack, the pigtailed 9-year-old you see warming up for mayhem here is giving what reviewers call "the most sensational" performance by a child in decades in her role of a child murderess in the stage adaptation by Maxwell Anderson of The Bad Seed. The off-stage Patty bears no resemblance whatsoever to the stage Patty. Patricia Ellen's father, Frank Russo, is a fireman with Engine Co. 250 in Brooklyn. She assumed the name McCormack when she became a working girl at the age of four. Her mother, Mrs. Betty Russo, skated in the roller derby and was a semi-pro ball player in the softball league. In a recent interview, the suggestion was made that Patty may be a great star when she grows up. To which the little stage monster replied, "Oh no, know what I want to be when I grow up? A nun."
Posted by Pantheon Zeus at 8:34 PM 3 comments:

Cat Sh*t One - The Series Trailer

I'm not against cursing, but I don't want spam or to get google-flagged. Anyway, check this out!