I love this movie!

First I'd like to apologize, or if you're Arthur, apologise for the compression quality of this clip. I found it on YouTube, and embedding was disabled, so I said "What? Does the guy who uploaded it think he OWNS it?!?!?!? That's like antiyoutubeish!!"

So, I downloaded it and uploaded it. Ha!

This movie is written by William Peter Blatty who wrote The Exorcist and was directed by J. Lee Thompson, who directed Guns of Navarone, Cape Fear, Taras Bulba and What a Way to Go!

But it's not out on DVD and as far as I can tell, TCM has forgotten about it. Maybe they'll air it when Shirley croaks..(she's 74, so it could be another decade easy and, for the record, I don't wish it on her)...

But as regards Shirley, this film taught me that a woman who wasn't classically beautiful could be even more so; she was rockin' that whole Giulietta Masina vibe, and I had been told by adults that she as an actress should be appreciated because she was "cute" so I watched her films quasi-appreciatively, until I saw this one which made my head explode, like a young Borgnine.

It's schticky dreck, and very apt for the zeitgest, with Saudis n'all (Ustinov!) Every character actor in the universe is in it too, Jim Backus, Fred Clark, Wilfred Hyde-White, Harry Morgan, Richard Deacon, and the ubiquitous and recently passed away (always include the away - OK?) Charles Lane.

Posted by glyphjockey at 6:27 PM 7 comments:

How on earth he never got an emmy for his amazing Omar Little, I will never know.

We Are Your Children

Chilling. But hey, we're not all dead, so Ha Ha! Also, lest we forget, his roots were in Scientology.
Why didn't Railsbeck (Everybody's favorite Ed Gein) get an Emmy? WTF?!?!? I BLAME THE SYSTEM!!!

Hooray for the Hallowe'en countdown!

Posted by glyphjockey at 4:03 PM 3 comments:


R.I.P. Damn. One of my favorite Paul Newman performances of many is "Road to Perdition."
Posted by Donna Lethal at 2:03 PM 1 comment:

Julie Newmar on "What's My Line?" 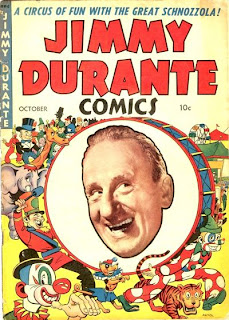 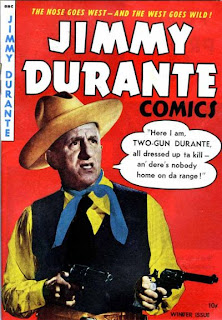 The Lady In My Radiator - In Heaven

I hope you enjoy this animated short by Brothers Quay, uploaded to YouTube in two parts by jonbeinart. 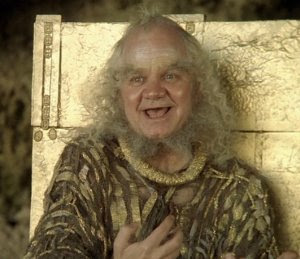 have a listen to "Michael J. Pollard for President."
Posted by Donna Lethal at 1:07 AM No comments:

The Rifleman has wood. 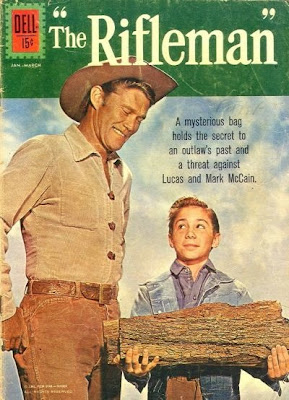 What more can I add to this?


robertwmartens has uploaded this interesting video from his late Grandpa's collection. It's particularly mysterious due to the fact that nothing is known about who made the video (so far). Check out Robert's website, where he has thoughtfully shared the collection of Gustave A. Martens videos, over at Grandpa's Picture Party
Posted by Mrs. Muddle at 5:45 AM 2 comments:

Via SomethingWeirdDotCom
Posted by Mrs. Muddle at 3:39 PM No comments:

From The Day Today for those of you who haven't checked it out.
Posted by Mrs. Muddle at 3:11 PM 2 comments:

Video footage from 'L'amante del Vampiro'.Now that I've been banned from YouTube I've got to put my videos somewhere. And to think, it wasn't because of filth!
Posted by Mrs. Muddle at 2:41 PM 2 comments:

SATAN HAS BEEN PARALYZED

The Devil is a blabbermouth,
distorting every fact;
but the truth is he's a loser
since Jesus broke his back...

Gather close, ya landlubbers, and learn how to be a good little pirate on the High Seas of Faith ...

Ol' Slewfoot calls the good Cap'n a FATSO in front of the young'ns!
Let's listen in ...

Captain Hook. The former "bad seed" biker who lost a hand and a leg in a traffic accident, gave his life to the Lord, and decided the best way to spread the Gospel was to assume the guise of a bandit and encourage inflicting bodily harm on the Enemy. The man who gave us the "Christain Pirate Rap." The man who performs on-camera autopsies on "sinners" for the educational benefit of today's wayward youth ("What's this? A beer can?! Oh, gross!!"). The man for whom Jesus was made to walk the plank.
He walked the plank for you, too. And for me.
Avast, and a-men.
Posted by Anonymous at 5:44 PM 3 comments:

It's chaos here - no one is in complete control - so here; OBEY.

The Enigma of Kaspar Hauser

"I saw the ocean, and I saw a mountain and there were many people climbing up the mountain.
It was like a procession. There was a lot of fog. I couldn't see it very clearly, but at the very top was death."
Posted by Mrs. Muddle at 6:50 PM No comments:

Nice TSA Lady with the Confiscating and the Charges and the Shooting with the Banging and the "I Forgot" and the "Who Knew?" Oy .

"Jerry Lewis has escaped firearms charges over a gun discovered in his carry-on bag at Las Vegas airport.

Security seized the .22-calibre Beretta from the 82-year-old comic in July, and he was accused of carrying a concealed weapon without a permit.

However, Judge Karen Bennett-Haron yesterday dismissed the charge after lawyers agreed to let the comedian off without a fine.

Lewis's manager initially said the unloaded weapon was a prop used on stage, although Lewis later said it was a gift given during his annual telethon for the Muscular Dystrophy Association, which he had forgotten was in his bag." 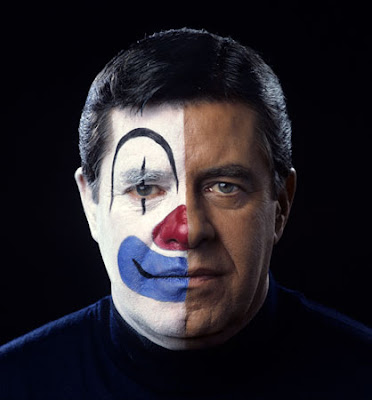 Posted by glyphjockey at 4:18 PM 3 comments:

I went and set this up and then saw my virtual bud over at PCL Link Dump, Phantom of the Radio had already posted it on YouTube. Figures. Either way, enjoy Mamie as she mortifies Clark, bemuses Doris (The finest ass in the history of Hollywood - as Rudy Ray Moore would say "It's a mystery how it hangs") and provides Gig a sense of superiority in Teacher's Pet:

Posted by glyphjockey at 4:07 PM 5 comments:

Truly, a miracle has occurred!


Overview for The World's Greatest Sinner (1962)

A bored insurance salesman quits his job to go into politics. He first starts preaching about how man is greater than he thinks and that man can live forever. He ends up forming his own political party, "The Eternal Man" party. He begins to be referred to as "God". Then he starts having doubts about the eternalness of man.

The Sin of Nora Moran 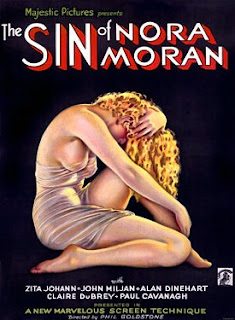 Does anyone else remember The Sin of Nora Moran? I saw it years ago either on VHS or TV - this is the only clip I can find at the moment. 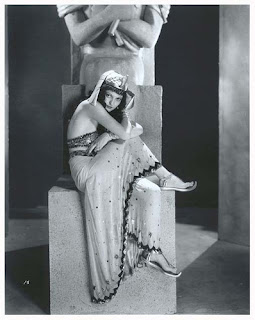 Here's a guy who has no problem relating all the fucked up stuff that shaped him. Plus back then if you weren't buzzed, bombed or stoned when you went on a talk show, you weren't doing it right.

Shitting in stuff in high school:

A different breed of cat:

Talking about Night of the Hunter & acting guilt:

via Kliph Nesteroff, but he's got one out of order
Posted by glyphjockey at 3:21 PM 2 comments:

......the rest? Tonight. The story evokes issues like immigration, AIDS, race, you name it, wherever two populations must coexist, with one being a minority. So far it's beautifully done, if the end sucks, I will atone tomorrow. But I don't think it will/

Posted by glyphjockey at 2:45 PM No comments:

Email ThisBlogThis!Share to TwitterShare to FacebookShare to Pinterest
Labels: zombies

Jawohl, Keep your Sunny Side Up, Mein Freunde.

Via Onkel Chrispy
Herzog predicting/channeling the David Lynch of today.

Posted by glyphjockey at 2:37 PM 2 comments: 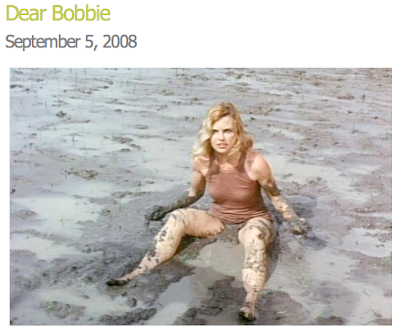 I love Steve Coogan! I know he's hot now that he's BFF with Ben Stiller, but I've been a fan for years (thanks, BBC America). I think I'm one of the few hundred people who've actually gone to see "Hamlet 2", mainly because I'll see Mr. Coogan in just about anything...including bad commercials:


I think he has an amazing face that can look horrible or handsome, and he has some hot dance moves:

I haven't seen this since I was a child - it scared the life out of me - but I'm ready to watch it again now because I obviously didn't appreciate the humour back then (and I don't think I was prepared for the gruesome killings which kept me awake at night for a long time after).
It also explains why the guy from the Eurythmics always freaked me out too.
Posted by Mrs. Muddle at 9:11 AM 1 comment: 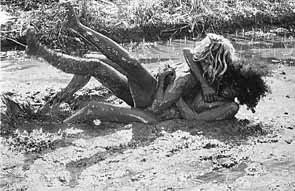 A friend sends the news of Roberta Collins' untimely death.

Damn. She lived near me, and I knew it, but I didn't want to bother her. Now I wish I had, if only to talk about The Big Doll House and Death Race 2000. She didn't even make it to see the remake. 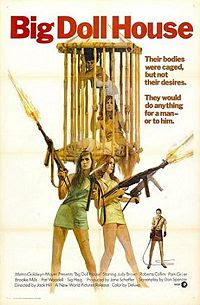 Roberta and Pam tusslin' in the mud!