The Eternals (2021) directed by Chloé Zhao 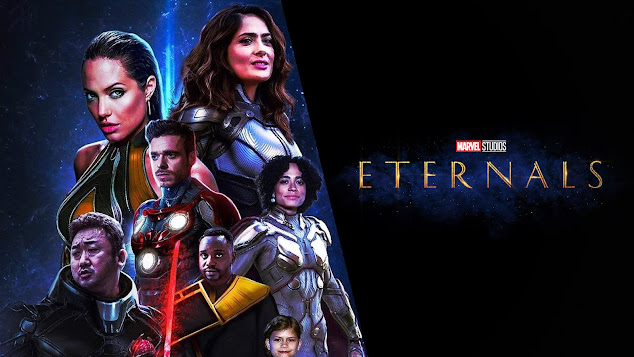 The Eternals is an odd property for Marvel to give the multi-million dollar treatment but they did it a few times before and often that risk makes for an entertaining film. I would say this is not exception, it' IS an entertaining film even if it is a bit of mess with plot and character motivation. Spanning thousands of years, the back stories of a group of... robots?... not clear what they are exactly but it is said they were programmed at one point so robots will suffice have been put on Earth to protect it from one threat - the monstrous deviants - and NOTHING else. These creatures have all been destroyed and the group separates waiting to be taken back home now that their work is done. More deviants appear and it is discovered that their purpose is more than they were led to believe. Follow that purpose and everything on earth dies or go against it at huge cost and only a small chance to succeed.

All the performances are good, the gang of super beings are all pretty unique and pretty fleshed out for a movie of this scale. It is a marvel film so the effects are top notch. The story is a little hard to follow or believe at points, it does ask you suspend your disbelief more than even other superhero movies do but the cast is endearing and pushes it along well enough that while you are watching you get caught up in the events on the screen and on't question it too much. I am not sure the ending makes much sense to be truthful and I did not like the "teaser" of a future reveal of one of the Eternals human lover being maybe more than that. Just tell us for once!  It was interesting enough to make me curious how they night fit into other marvel projects but it works as one off for me as well.

Posted by Behemoth media at 2:54 PM