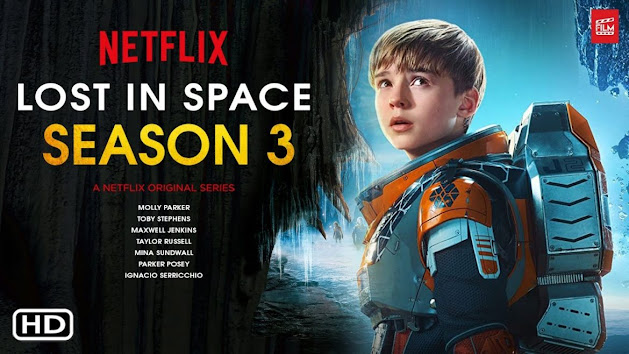 It's been a couple years since season two thanks to the Covid epidemic but the show has managed to keep it is fairly tight tone even if it couldn't keep its main character from growing up. Luckily that is explained by picking up not where we left off but a year or so later with the family split up between the children on a destroyed planet surrounded but the debris of it own destruction and the parents who are working on a an array of the other Jupiter spaceships while they look for an alien motor and alien robot to transport them all to the promised land planet.

The episodes are of varying lengths and I found that a plus. No episode had to be padded to fill in the running time and I think the money saved on that went into keeping the effects work top notch.

As this is the last season, I wasn't sure how it work out with all the characters, Dr. Smith in particular is not exactly on a redemption arc really as it goes on but I was happy with her final outcome. The war between the humans and robots gets resolved in a way I found a bit obvious. That said it was entertaining and all the actors were good in their roles even after the unplanned hiatus. There seems to be more integration of the original TV show theme music which worked really well. This is one show that knows what it is and doesn't try to be anything else. Might even rewatch the entire thing again at some point.

Posted by Behemoth media at 3:04 PM