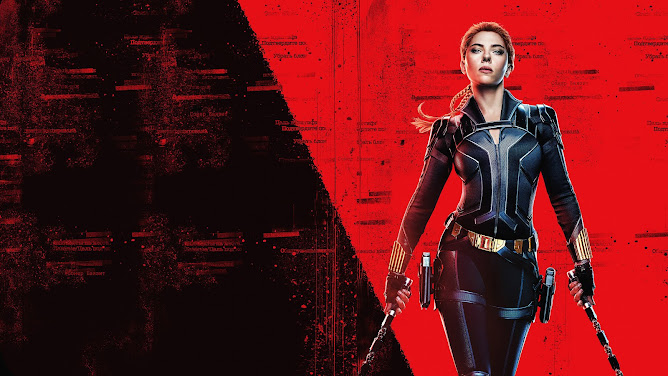 The long awaited solo Black Widow finally arrives this past year and while it's a fun film to watch with some nice performances by Scarlett Johansson and Florence Pugh, it's sort of too little too late for it to make a big impression.

The story takes place between other Marvel movies, obviously before Black Widow dies in Endgame and involves her finding her lost sister and reconnecting with the rest of her "family who were really just Russian agent from a shadowy secret group training girls from childhood to be "black widow" assassins. Shenanigans ensue and the characters are lively and fun to watch with nice action set pieces and some ridiculous scenarios... how long would a giant floating fortress take to fall to the ground? Hours apparently! None of that gets in the way enjoying the action and it move along fast and furious with Shortland's excellent direction.

It's pretty good fro a project that was in development hell for so long but it does suffer from a little too much Marvel in universe referencing and doesn't set itself apart from a typical superhero movie except in one area. The main characters are not really all that super. The two woman leads are highly trained assassins and much of what happens is more like a Bond film than anything else plot wise and that was much appreciated. If this had been  released 10 years earlier it would have had a much larger impact and being released now takes that thunder away. It simply isn't needed and adds very little to the Marvel universe or what we need to know about Black Widow in the end.

Enjoyable, yes. A much watch? Sadly,  no.