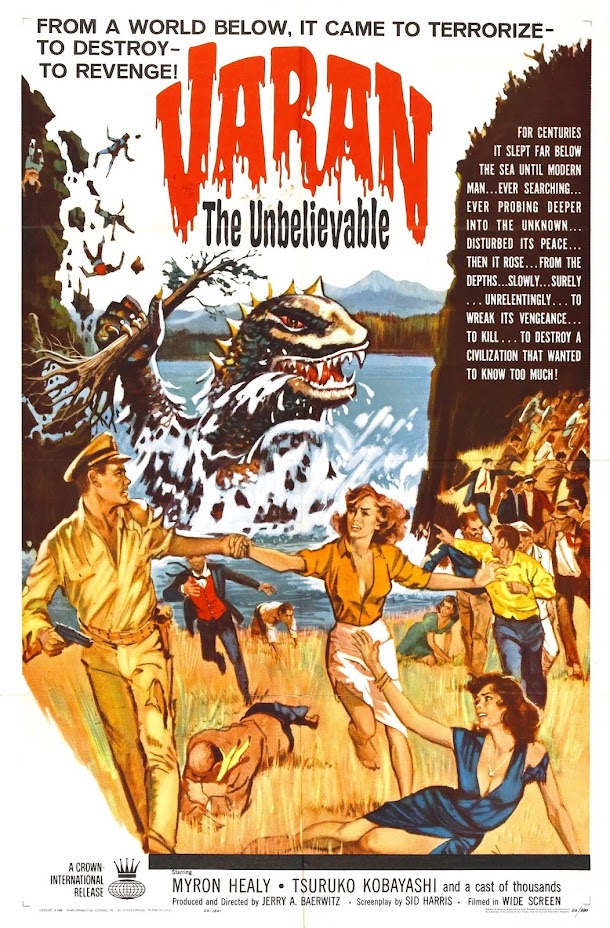 There might be several versions of this film but the one I saw was about 1 hour 7 minutes, making it about 40 minutes too long. The film was meant to be a USA/Toho joint production but that fell apart and the resulting English and Japanese filmed parts never mesh together. The Japanese sections don't even have subtitles.

Some military guy and his wife are doing some sort experiments on a remote lake that will poison the water. The locals think a monster lives there who will destroy the world if the lake is threatened. Most of this film is the military guy trying to evacuate the residents while being as sexist as possible to his far too subservient wife who wants the villages to be able to stay in their homes. There is a ton and I mean a ton of expositional dialogue that makes the film drag and the clichéd plot doesn't help it much. I expected more with Honda as director. There are many references to Godzilla, including his theme song being snuck in at one point.

Turns out there is a monster andit goes on a  rampage. Who would have thought? The wife blames herself because she wanted the villagers to stay and her brilliant husband states "this was no one's fault". Ummm... it was HIS fault 100%! He was poisoning the water and displacing an entire village for... reasons?

The monster itself is a highlight. Not too badly designed and it moves well on all fours. The effects overall are pretty good for a film of this kind, era and budget but they can't save the tedium between shots of the giant creature destroying stuff.

Posted by Behemoth media at 6:25 PM