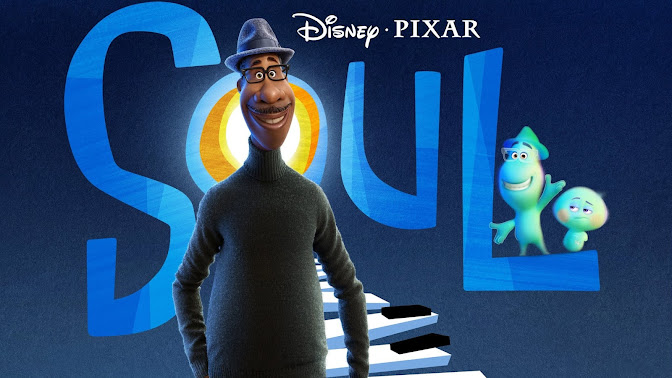 Pixar is in top form with this film. Yes the animation is fantastic as it is with all Pixar films but I honestly barely noticed it as the story and characters rightfully took all my attention from start to finish.

A musician (Joe) dies unexpectedly by falling into a manhole on the day of his big break to join a legendary jazz artist in her band and dies. That is the start of the story. On his way to the great beyond, he refuses to go there and leaps into space only to find himself in a place where souls are before they are born. He is mistaken for someone else and is charged with helping a reticent (to say the least) pre-born to find its purpose so it can go to earth. Joe uses them to sneak back to earth but he ends up n a cat while the other (22) ends up in his body. The film then turns to them trying to get Joe to his gig on time and back to his his own body.

One thing I loved about this film was the design of the characters. There is often a tendency to try for "realism" in modern animations and this goes the opposite direction and avoid all the uncanny valley pitfalls and distraction "realism" can burden an animated film with.  Some compare this to another Pixar film "Inside Out" but it's truly it's own thing and a very mature project with problems dealt with a way anyone can understand.

I don't think it's my favourite movie even in Pixar's history but I really appreciated the risks it took by making something so thought provoking and adult in nature. I really does not seem to be aimed at kids at all, in very good way. The end is open to interpretation, we are not sure what direction Joe is heading and that makes the film point... it's not what he ends up doing, it's how he ends up doing it and why.

Posted by Behemoth media at 2:36 PM