Aguirre the Wrath of God 1972 directed by Werner Herzog 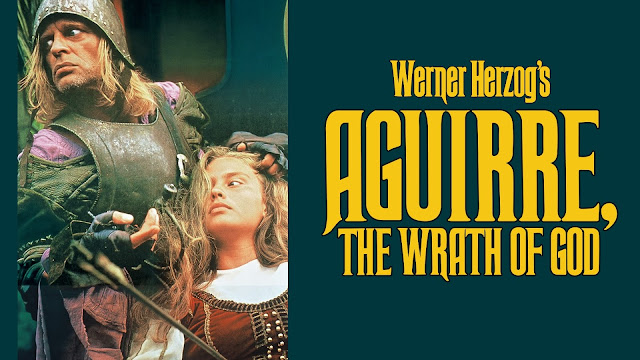 Aguirre, der Zorn Gottes is one of my favourite films of all time. I refused to buy a DVD player until it was available in that format so it could be the first film I saw on the player. Like most Herzog films, it's hypnotic and slow paced, pulling you from one scene to the other. The actual story is secondary to the feeling you get watching it, it pulls you into its world.

Based on a true story is something Herzog excels in. Not that he remains true to the facts of whatever story it is. As a director he is more concerned with the emotions the story bring over the facts and, for him, it pretty much always works. Aquirre is his 3rd feature and it strays wildly from the source material. Frankly with Klaus Kinski as a Spanish conquistador, how could it not?

In a nutshell, a Spanish expedition to find the lost city of Eldorado is doomed to failure by the foolish audacity and ambitions of the explorers and the unrelenting jungle that surrounds and eventually envelopes them within itself. They are doomed from the start when we see hundreds of them walking along narrow mountain pathways to the very end where Aguirre is the last left alive, raving at monkeys and telling his dead daughter they are going to start a new world as his raft slowly disappears around a river corner. In real life, Aguirre was brought back home and executed, apparently mocking the marksmanship of the firing squad as he died. 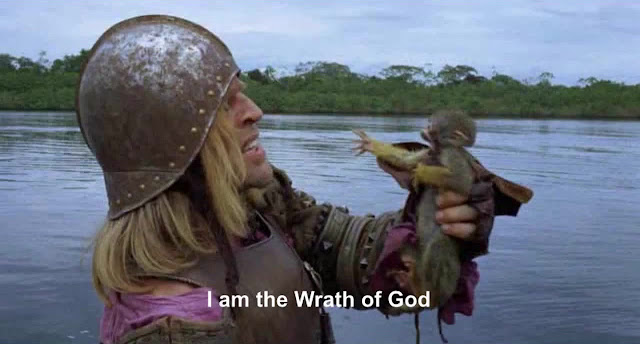 I would say this film has really only two characters. Kinski and the Amazonian jungle. Klaus's interactions with everything around him are what makes this movie work. His intense face says more than his words ever could and as his madness grows, the jungle seems more determined to absorb it and make it it's own.

The film is both a straight forward narrative and a dreamlike voyage. You never get explanations for things the characters don't get explanations for - so we know no more than they do about what is going on at any given time and Kinski's performance is unsettling and crazy while being understated and calm. He not exactly a sympathetic persona, but it is impossible to take your eyes off him.

Herzog's direction and the cinematography as stellar. After seeing this film for years in revival houses with damaged, dusty copies, the DVD release was a revelation of how beautiful this movie looked. I would LOVE to get a Blu-ray but my finances forbid me from re-buying films I already have these days. Pretty much every frame, every shot is intriguing and painterly. The music is perfect and all the performances add to the overall feel of the production. It's easy to see why this film developed a cult following.

Instead of going into the plot details and relevant scenes of the film I would rather encourage everyone who loves film to see it, multiple times. I have quite honestly put it on repeat in the DVD player and watched it on and off for an entire day and it never got tired of it.

Posted by Behemoth media at 8:37 AM

Never seen or heard of it, but then again, I don't know that I've seen any Herzog film. Sounds like this might be a good place to start!

it is a good introduction to his full length films. Grizzly man is a good intro to his documentaries. they are all odd in thier own way but this way is sort of hypnotizing and not as bizarre as say "Even Dwarves Started Small" which is kind of a mind fuck.