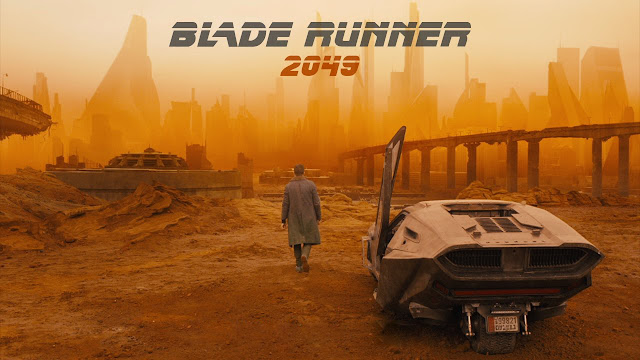 So as not to retread things everyone has already read elsewhere, I’ll assume that by now most readers are familiar with the original movie and this sequel.

One of the things the original Blade Runner fit had in spades was the  believability of its world building. It did so by giving you just enough information to keep you from being lost while at the same time giving you the mystery of looking into a new place where not everything is handed to you in a silver platter. The sequel does the same and I appreciated that. it did a great job of introducing new things and how they function without techno-babble. The world looks lived in and the people in it know how things work the same as we know how things work in our world. It all looks very natural and sells the idea you are in a real place.

The scope of Blade Runner 2049 (I so wish the original had not put a date at the start of the film - it never works out well as that date comes and goes in the real world) is pretty large. Instead of taking place just in Los Angelos, it goes to a few other locations we had never seen. Sadly, we don’t get the feeling of an integrated world - the locations seem unrelated to each other in a grand sense, at least they did to me. Still, the visual beauty of all can not be over stated. It looks amazing.

Much has been made of the run time of this movie and I’ll agree it’s long, but not boring or too slow. I liked the pace and never lost interest in what was going on, even if what was going on didn’t get me anywhere in particular. The choice to have it told from the point of view of a replicant and follow his investigation that leads him to look for a human (Harrison Ford from the first film) was a flip from what we had seen before and it worked out well. Ryan Gosling is a little too human maybe in the role but everything is the film supports and helps him keep the story progressing.  Jared Leo’s role as the eccentric creator of new breed of replicant workers which was to go to Bowie before he died was sparse and not as over the top as I was led to believe, he was pretty dialled back, but also a weak link as a character. I wasn’t sure he was really needed.

The most interesting thing in the sequel to me was the relationship between humans and replicants and replicants with other technologies. Society has decided to « retire » the older models and replace them with less autonomous newer versions. Leo’s character seems to want to make replicants that can breed and everyone has opinions after realizing that that trick had already been done. Gosling’s blade runner is sent to find and kill the baby (which was fathered by Harrison Ford and his replicant lover Rachel after the first film ended) and begins to suspect that HE is that child. His boss (Robin Wright) wants to sleep with him (who doesn’t? it’s Ryan Gosling) and his holographic girlfriend and he seem to developing a real emotions for each other. In a way, the humans have to figure out if he is a real being and he has to figure out if his holographic sweetie is real - it’s turtles all the way down. When Gosling’s character see a giant hologram ad for the his holographic girlfriend and she says many of the same things to him - we are left as unsure as he is if her AI gave her a real conscious or if it all just part of her program. How much of him is programming - how much of us is?

As the story progresses we discover the answers to some mysteries but not others. Wether Ford’s character is a replicant is still unknown and the film plays with us (unfairly, I think) in that regard, Gosling’s character discovers he isn’t the child he is looking for but has a memory lifted from her, leading to a really confusing reunion between her and her father which opens ups lot of plot questions that never get answered. As a story, this film is not very satisfying. It’s fascinating to watch but we don’t learn about this new version of the Blade Runner universe. Too many of characters are far too underdeveloped and too many plot points are as well.

Overall, is it worth seeing? I would say yes. The visuals alone are worth spending almost 3 hours watching but this movie shows us, it does open conversations. Even if those same conversations were opened by the first film, we still don’t have good idea where they are going decades later. So not the classic the first one was but not a failure artistically either. Box office-wise, both were failures on release and maybe this film will find a cult audience and more meaning over time.

We're going to have to disagree; while the effects were nice, they do not a movie nor a story make. I didn't care about anyone in this film, least of all Leto (you could have edited him out and it wouldn't have mattered at all). Harrison Ford just looked old and tired and honestly, I'm tied of him. And this film committed that most heinous of crimes; it ended in a fist fight. A BAD fist fight. Sure, we sort of get an answer for Gosling, but so what? The whole "replicants can have a baby" thing was SUCH a non-issue; the people who MADE them would have known that. The underground or resistance or uprising...whatever. I've watched this twice, trying to like it but there's just nothing there. For me.

We don't really disagree all that much. I also said Leto wasn't really needed - I guess they wanted a Tyrell replacement for some reason. I think there is a ghost of things in there, interesting ideas that never get enough attention. Beautiful films can be fine to watch just for the visuals, though I can't manage to sit through Prometheus five minutes and that film is gorgeous. This film is a lot less dumb but maybe just as empty in the end. This movie could have been a lot better if it focused on one thing and stuck with it. That fist fight was pretty bad... and LONG. Maybe I'm less harsh about it since I think I could cut an hour out and make this much better. Why was Harrison Ford in it? Fan service has become a plague.

To me, none of the replicant stuff makes sense. Gosling is about the only replicant we see that is following these so-called laws that allows them to be on the planet at all. The rest? They're all rogues. So someone had to know about it. Which means Tyrell Corp, or whoever has to know, which means this whole search for a baby replicant is dumb. And we don't care. I've seen far too many movies that are just pretty and have either no story or a badly told one, so I have no tolerance for this any more. The budgets are so huge, there's no reason at all why a good story can't be crafted. If you or I had that kind of money, we could certainly do it. Why can't Hollywood?

Did you read the book? I did and my understanding of replicants comes more from that that either movie. So I have knowledge the films don't provide - which shouldn't be needed if the film does it job right. I didn't get why they needed a replicant Blade Runner, are cops that incompetent in the future? The baby story was much less interesting to me than whether or not Gosling's sex AI was sentient or not as that is something we are starting to think about as a society today. John Waters was once asked what he would do with a 10 million dollar budget (this was in the 80s) and he responded "Make 10 movies". (You and I could make 100 and retire on the rest!) I think films should use the animation movie model - ⅔ of those are preparation of look, characters and storyboarding, the remaining ⅓ is the final animation.

I read "Do Androids Dream" at one point and was amazed how little of it had anything to do with "Blade Runner." That being said, my theory for the original movie was that Deckard was a replicant given the memories of Gav, who, you remember, walked with a cane. I think HE was the Blade Runner and was wounded such that he couldn't really do his job any more. So they made Deckard to see if he could pick up where Gav left off. In the director's cut (the good, 1992 one), there's a scene put back in of Deckard dreaming of a unicorn which ties in with the origami unicorn that Gav leaves at the end of the original film. All of that is far more interesting than anything in 2049. Though I think you're right; if they'd developed things with the AI, it might have made a better film. It was a bad year for BIG sci fi. Did you see Valerian? Gah.

The book is pretty much completely different except for a few concepts. That said I liked the first film better than the book. Valerian... good god what a mess that film was. Another good director that screwed up badly with a large budget film. I am more with you on budgets - bigger films seem to ruin themselves I think because they have so few limits to work within. They also get a lot more studio interference which might have been the case with Blade Runner 2049. I guess like it or hate it, there was really no reason to make it.