Dramatic Readings: Save the Earth!


Another one! This is based on the theme to Godzilla VS the Smog Monster because - why not? Oddly the message, such as it is, is still relevant today... more so even. Plus it's totally weird, 60's and silly.

Thanks as always to Mike Luce for the voice work!
Posted by Behemoth media at 12:22 PM No comments: 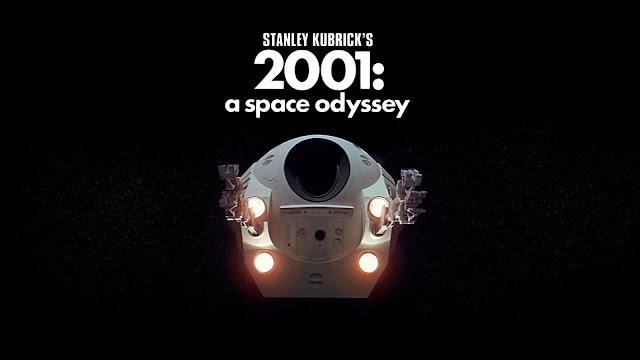 2001 is one of the most influential films ever made and will soon get a re-release in 4k for it's 50th anniversary.  It's visuals are striking and 50 years later they still hold up despite being done at time long before digital effects existed. It's non traditional story telling keeps people guessing as to the "true meaning" of certain elements  of the film and the soundtrack, though pretty much all classical music,  has become symbolic of the future we have in outer space. It was selected for preservation by the National Film Registry in 1991.

The story, though told unconventionally, isn't all that complicated in essence. Extraterrestrials have been promoting human evolution and development since they roamed the plains as primitive apes - prodding them to use use tools ( for violence at first) and take the first steps towards intelligence. This is done trough a totally black and smooth monolith which appears out of nowhere. Jumping thousands of of years later in one of the most iconic jump cuts in film history, a group of scientists on the moon have discovered another monolith, deliberately buried there which emits a signal toward Jupiter. A ship is sent to Jupiter where it discovers another monolith near the planet which opens a star gate, apparently taking the astronaut to wherever the aliens are and returning him... or some version of him maybe back to Earth int he form a "star child" who might represent the next stage in human evolution.

Fair to say, the actual plot of the film is secondary to the effect it has on the viewer and how it changed sci-fi and cinema after it's release. Never before had so much care been taken to realistically show the future in space. Some might say no one has ever put that much car into it again. The effort pays off and everything from the way we see travel to the space station, the moon and beyond is still not only believable but pretty accurate for a movie made before man had even set foot on the moon.

The realistic presentation of technology made a huge impact. Spaceships and alien encounters aside, the character of HAL, a super computer that proves to have  mind of it's own, has become the poster child for tech and artificial intelligence gone wrong. This is unfair to HAL, I would argue, as his actions though severe (I think killing almost the entire crew as they sleep counts as severe) are not totally beyond comprehension. HAL has become emotionally unbalanced because he was told to keep information from the crew, something that leads him to think the crew can not be trusted with such an important mission. The sequel 2010 goes into this in more detail, but the seeds are planted here. When HAL tell the last living crew member "I'm sorry Dave, I'm afraid I am not able to do that", it's terrifying. 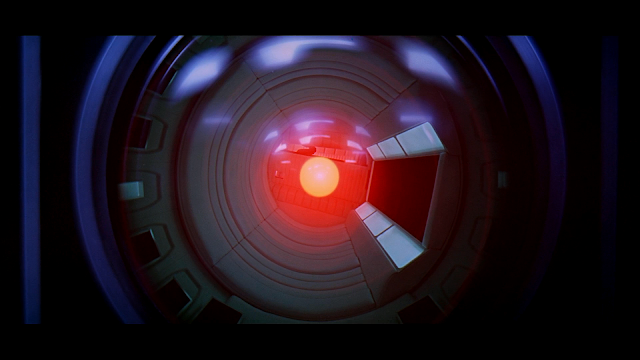 To be sure, the film goes into complete mind-fuck mode by the end as the sole survivor disconnects HAL and leave the ship to meet up with the monolith. A mind blowing psychedelic display later, he seems to go through the rest of his life in minutes, and solitude, only to be transformed into the star child which heads back to earth. How someone reacts to all this is dependent on each person's personality and beliefs - and possibly what drugs they took before entering the theatre.

Like most Kubrick films , this one had some people loving it while others hated it with a burning passion. It did quite well on release and became not just a cult classic, but a true classic of modern film. It won an Oscar for best special effects but lost to Planet of the Apes for make-up, leading many to think that it was overlooked in the category because the apes in Kubrick's film were so real, academy members thought they were. The techniques uses in the film are revolutionary. On example is the use of font projection over matte work. This meant that instead of tracing an element and adding it to another piece of film (leading to that black line seen in many effects shot of the period) it used a giant super reflective screen that had an image projected on to it so the camera could film both the foreground action and the affects backdrops at the same time with seamless realism. In fact, even the outdoor shots on the African plains were all done in doors. The designs of everything form the ships to the clothing to the zero gravity toilet hold up to this day. Even though we have now been to the moon, have a space station or two and have sent probes to the other planets - none of that seems as real as some of the stuff we see in this movie. 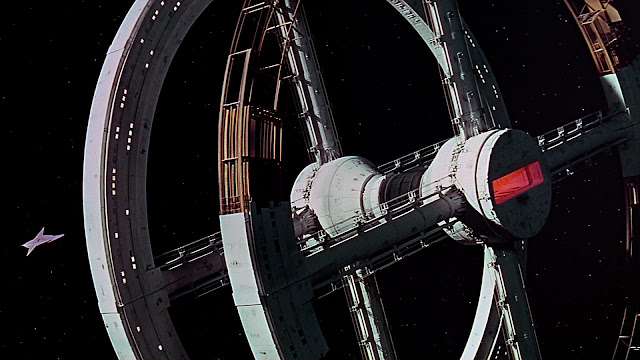 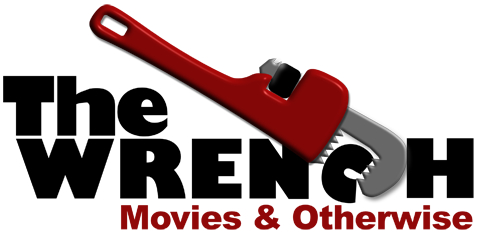 Mike Luce has expanded his Movie Wrench blog to cover music too, so is basically just the Wrench now. Check it out, comment sand tell him wha you think!
Posted by Behemoth media at 11:58 AM 2 comments:

The Exorcist 1973 directed by William Friedkin 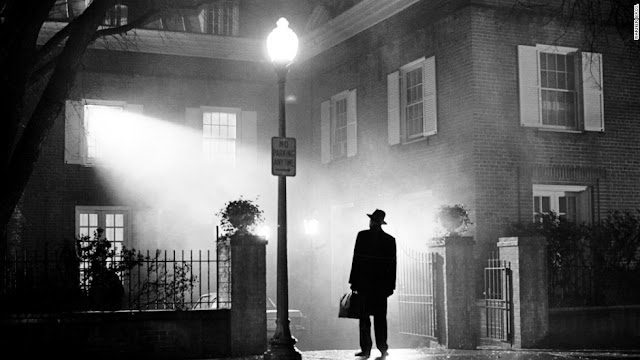 Based on the book by William Peter Blatty, the Exorcist is the story of famous actress whose young daughter is possessed by a demon and calls in the aid of a Catholic exorcist to expell the evil force. The story was inspired by a "real" 1949 exorcism story of a young boy that shared some details with Blatty's book and then the film that followed.

The film was a huge success and changed not only horror films but introduced the public to the idea of the blockbuster. It was the first horror film to be nominated for Best Picture and it scared the living crap out of most of the people who saw it.  Just hearing the theme "tubular bells" was enough to set people on edge after seeing it.

I had read the book before seeing the film and the movie version very closely follows the base material, so I wasn't as unprepared as many to see some of the more shocking moments in the film. Still, some shots to this day are very shocking and unsettling and while some like the infamous pea soup vomit scene have been reproduced in other films and in parody, there remain a few scenes that I've never seen anyone have the nerve to copy. 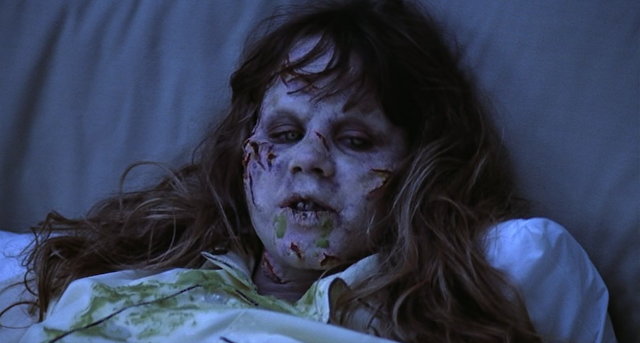 The film is slowly paced, but keeps the tension up from start to finish. It uses almost but not quite subliminal imagery superimposed over background elements to add to the nightmare quality of what is happening. The make effects stand the test of time, even the head turning 360 degrees scenes hold up and the soundscape of the film is really haunting. I have to say while the movie is known for it's shocking violence and gore, it's the more subtle, quieter moments that stay with you. They compliment the more over the top moments and make this a more psychological horror piece than a gore film. All the technical aspects are enhanced by the case, everyone  - Ellen Burstyn, Linda Blair, Jason Miller and Max von Sydow - give performances that draw you into the supernatural story in a way lesser actors never could.

The version I just saw was the "version you've never seen" DVD and it had several added scenes including the bloody version of the "spider walk" scene which you would think would  look like comic relief in a movie made this long ago... but it's pretty damn bizarre and scary even today.

It's hard to remember that before this movie practically no one had ever heard of an exorcism. After it was released, there were exorcisms galore, not just in other films but in real life. Suddenly demon possession was in all the papers and the Catholic church had it's hands full with all the new cases being brought before them. 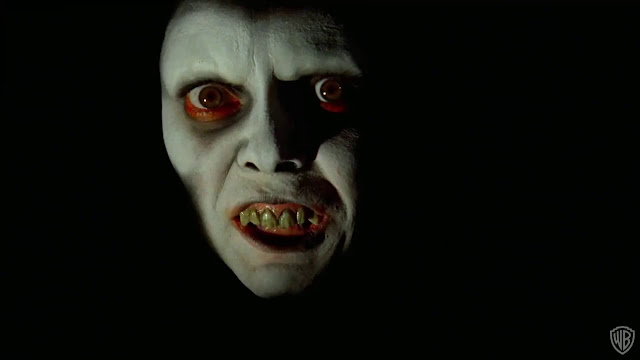 
Based on the Chris Crocker's dramatic internet rant. Another in the Charles Webster Billingsworth the 3rd series of dramatic performances.
Posted by Behemoth media at 6:29 AM No comments: