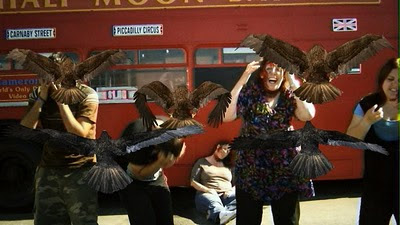 Recently, thanks to some promotion from «Riff tracks» the online site with the guys from Mystery Science Theatre 3000 making fun of movies as they watch them, a truly awful film has emerged and is gaining somewhat of a cult status. Some cinemas are even playing the film at midnight and people are coming with props and yelling put downs prepared in advance... just like the old days. What is this modern day masterpiece of «how not to make a film»? It’s «Birdemic - Shock and Terror» and I can vouch for it’s complete and I do mean complete lack of a single element of quality throughout it’s entire runtime.

How bad is it? Many horrible films have stupid plots (if any), bad filming, sound and effects (and this does not disappoint in any of those categories), but how many films are so bad that the actual transitions from one shot to another make you laugh out loud. In today’s computer assisted offline editing environment a simple crossfade is hard to screw up.. yet somehow «Birdemic» makes even the most simple and invisible of transitions into something so poorly executed, you can’t ignore it.

The plot is basically 40 minutes of nothing happening... lots of driving, parking, slowly pulling into traffic with no mention of birds, never mind a birdemic, then it violently collides with another film with a scene of «eagles» (computer generated puppets that I guess might look like eagles if you were really high on something) diving in to a gas station making bomber sounds and squawking (exactly) like seagulls. Oh.. and they explode on contact. And at one point they pee acid on people. They also break every law of aerodynamics you can think of. Why? How? Do you really think you’re going to get a reasonable explantation, or any at all?

Even if the cutting, sound and image quality were acceptable, the acting would drag this film easily into «worse film of all time» territory, but since those elements are equally bad it lifts the bar for bad acting to a level that may never be topped. People come and go in this film for no reason and more than one says «it’s not the eagles that scare me but the most dangerous animal of all, the human race» and then they rant about global warming for 3 minutes and walk away. The really scary thing about this movie is that the director is making a sequel... in 3D!

The thing that makes all bad films amazing to watch is when you can see the film maker has no idea the film is bad at all. In fact, this film like Glen or Glenda, tries so hard to be relevant and meaningful you almost feel obligated to find something good to not just crush the director’s ego completely. «Birdemic» will not provide you with even the slimmest chance of that, but good luck looking.

For those who want to see how bad, bad can be this is the film to see. I recommend the «Riff Tracks» version to keep the pain to a minimum.

Posted by Behemoth media at 9:05 AM

That is some sweet genuine bad acting -- and not a bit of natural flow in that editing to conceal it.
Great find!