I Think It's The Ass-Slapping That Got To Me

.....not that I'm into that sort of thing actually. Vitameatavegamin this ain't. Vita, yes. Meata, yes. But vegamin, no. Quite the seductive babe, one might say. This was long before she got that only occasionally appearing weird Charles Gibson brow, and way, way before getting all moved by the chickdudeish Wayne Newton and befuddled by Burton and Taylor on Here's Lucy or The Lucy Show.

Posted by glyphjockey at 5:29 PM 5 comments:

Although it contains Satan, it also has the great Oscar Levant as well as Lee Marvin and Louis Nye (!), Connie Stevens, Sal Mineo ... how could I not to post it? Besides, Carl Reiner!

Marvin looks pissed off just having to be there.

As a native Bostonian, this is as ingrained in my blood as a lobstah roll or a frappe. How sick is it? Well, read all about host Bob Gamere heah before you watch, because it'll make it just that much sickah.

I really don't have much to say about this film that hasn't been said in other movie blogs. There are sets and actors in this film. There is dialogue and some sex scenes. There is violence and melodrama. Apparently the director/writer/producer/leading actor, Tommy Wiseau, financed this himself to the tune of $6 million and filming took eight months. If that is true, about $5,999,964 is missing from the final product.

I saw the best NILFs of my generation glorified by Beatness, acting cool and NOT naked, strutting on screen nationwide looking for an Oscar fix....why not?

Count to Twenty with Liam Neeson


"Monocle in the left eye - this is Transylvania"
Posted by Donna Lethal at 11:24 PM 3 comments: 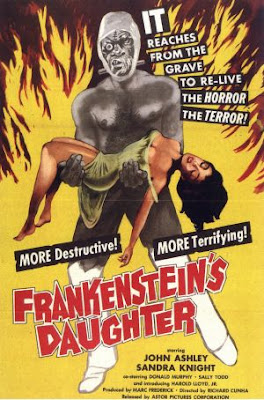 Frankenstein's Daughter. It rocked (thanks to a performance by wacky sidekick character Harold Lloyd, Jr,) with Frankenstein turning babes into horrid henchwomen for no apparent motivation other than having an f'ed up great-grandpaw. The reason I watched this was because I read M.W. Shelley's Frankenstein recently so I was on a jag.

Sita Sings The Blues was a strange experience for me because Nina Paley utilized a lot of stylistic elements I had been considering using for my next long-in-coming video. Annette Hanshaw recordings (I was looking for public domain music) Flash animation (I use Director 7) and lots of salvage imagery. It all comes together beautifully, and in her attempts to get copyright clearance, she became a fighter for free culture and as a result offers her film for free download at the official site. It's pretty wonderful, and beautiful and shows a great appreciation of the vibrance of Indian Culture 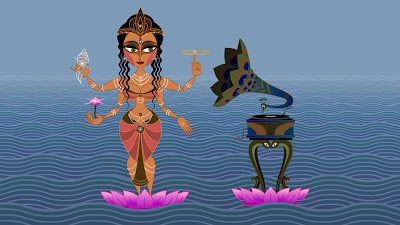 And oh yeah, my Mom used to sing a lot of those Annette Hanshaw tunes.
Posted by glyphjockey at 4:42 PM No comments:


Machete at IGN.com
Posted by glyphjockey at 5:44 PM 3 comments:

Email ThisBlogThis!Share to TwitterShare to FacebookShare to Pinterest
Labels: machete 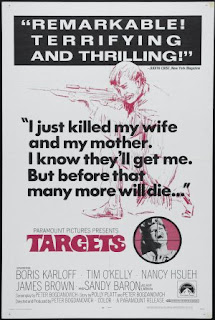 What do Roger Corman, Peter Bogdanovich, Boris Karloff and deranged Texas sniper Charles Whitman have in common? Targets, the 1968 Corman produced exploit flick that sought to mix silver screen behind the scenes drama with the violent current events of the mid 1960s.

Tim O'Kelly plays the young insurance salesman slowly unraveling ostensibly due to his experience in Viet Nam. On the other side of town a self-centered and eccentric director played by Peter Bogdanovich (of course) is trying to convince Karloff, the aging horror star, not to quit the business. He's got a new script cultivated straight from the current newspaper headlines, a mysterious story of real modern terror and he needs Karloff to make the picture.

After a few veiled warnings and a half-hearted attempt to explain his troubling thoughts to his wife our insurance salesman loses it. He guns down his family in their own home and heads for a nearby oil tank field where he can find his vantage point and start picking off drivers on the LA freeway. The whole thing ends with a showdown at the local drive-in. Karloff, Bogdanovich, et al. are there for the big bloody finish. An absurdist finale if there ever was one.

It's HOT in here!

Inspired by John Waters' new book, "Role Models", I just had to find out more about Armando Bo, the Argentinian Russ Meyer and his leading lady, Isabel Sarli. This trailer is a good place to start!

Do you want more? Here's a compilation of some of Isabel's greatest tits..I mean hits:

Posted by Mavis Martini at 1:57 PM No comments:

The Killer Inside Me


Damn. See this if you can. Casey Affleck is amazing and I never thought I'd say this, but Kate Hudson is great, too. Sure, prostitutes in small Texas towns don't look like Jessica Alba but the movie is such a literal adaptation of the Jim Thompson book that it's okay. I was talking to a guy at the theater and he told me that on the first night, three people walked out and one threw up. My kinda movie. Oh, and the soundtrack is killer, too.
Posted by Donna Lethal at 3:01 PM 5 comments:

Too Fun To Die 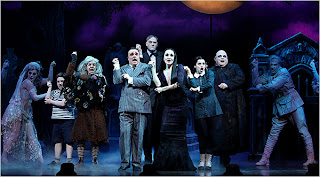 I think Nathan Lane is the male Ethel Merman - he delivers. Bebe Neuwirth brings her charms to her devotees, and I appreciate Kevin Chamberlin's homage to Jackie Coogan's screechy voiced Fester. I'm pleased that the always wonderful Jackie Hoffman has a steady new gig as Grandmama in this seemingly critic proof hit show.

John Lahr's New Yorker review says: As Grandma Addams, Jackie Hoffman, with her pug-dog mug and cartoony caterwauling, manages to raise the show’s temperature a few degrees. “Stay outta my shit or I’ll rip your leg off and bury it in the back yard,” Grandma screeches at her grandson Pugsley (Adam Riegler), adding, “I love you.”

I love Jackie Hoffman and her video blogs (and her GOOFING on a certain sci fi church next door to theater.) 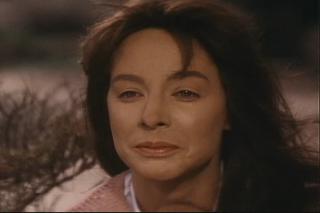 I beg you to click on Poseidon's Underworld hysterical blog recap of the 1979 melodrama/love story called THE PROMISE.

Beatrice Straight ("Dr. Lesh" from Poltergeist) is the evil mom of rich boy Collins who hates his commonor girlfriend (Quinlan is hagged up in the first half). Mom pays for Quinlan's post-car accident facial surgery if she vows to stays away from her son. And then the drama begins... 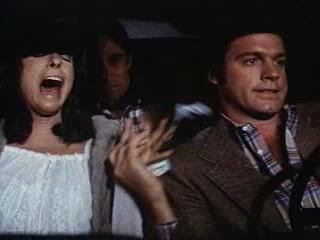 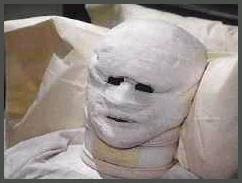 Melissa Manchester sang the theme song ('I'll never say goodbye"). 1979 was big for Missy - she also did the Ice Castles film theme. Now that I think of it - the two '79 films would make a great tortured love double feature.

Please have a peek at this recap of The Promise: