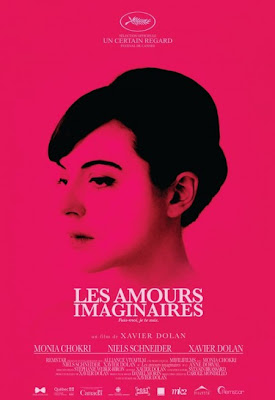 The new movie from young Québec film maker, Xavier Dolan (who writes, directs, stars and even has a hand in the costumes) is certainly an interesting second effort. Heavily influenced by the French New wave Cinema in style and lacking, on purpose, a complicated screenplay which lets you get more into the beautifully filmed and executed character interplay. All the performances are fantastic, even if the three main characters get upstaged a bit by the intercutting of people talking about their bad relationships documentary style, which is quite funny.

When pals Francis and Marie meet a somewhat mysteriously androgynous Nicholas at a party, they both get pulled under his spell. The film is a sort of love triangle, except the 3 people involved won’t even admit there is any romantic attraction until it has become apparent to the audience that the object of their affections is a self absorbed jerk, getting off on pitting two friends against each other. In the end both hearts get broken along with their friendship. Pretty boy of course goes off to find more people to worship him and plays dumb to the whole situation.

I love how the film is shot, at some points you’d swear the camera is only focused on the back of someone’s neck walking away in slow motion, or close ups of a sexy guy’s belly hairline, but it all works and draws you in. Marie’s obsession with looking like Audrey Hepburn is handled well and Francis’ pain when his object of desire coldly states , “What made you think I was gay?”, when he’s done nothing but give hints to that effect all through the film is truly heartbreaking to see. 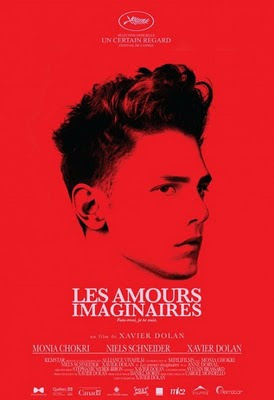 My one problem is the film ends too late. After all is said and done, the friends slowly start to repair their relationship, shown in a brilliant rain scene where Marie’s umbrella slowly (because you are looking at the back of their necks walking away in slow motion of course) makes it’s way over Francis’s head and they share it’s protection. Everything afterward does nothing but make you lose respect for the two, who seemingly fall back into the same trap all over again as if the whole movie never happened.

That useless epilogue is almost a minor quibble compared to how successful this movie is overall, however. It invites discussion of all sorts and makes you think without being preachy or obvious. In many ways it really is a throw back in substance as well as style to the 60’s French New Wave or 70’s art house film idea of what film can be in the hands of a very talented young director.


What can I say about this? When I got the chance to see this years ago with my best friend, Mavis Martini, we were laughing so hard that someone tried to shush us, and I said, "LOOK WHAT WE'RE WATCHING!"

Read more about it from John Waters here.

I finally met Elizabeth Taylor, I went to her house for a cook-out, and I think I was invited because she has an all-gay staff and they like my work. I walked in and I said to her Oh, I love 'Boom'… she said that's a TERRIBLE film….she got really angry at me and thought I was insulting her, I thought she was going to throw me out. She looked like Divine, kind of. I don't mean that badly. I mean, Elizabeth Taylor was Divine's idol, Divine even smoked Salem cigarettes because Liz smoked them. 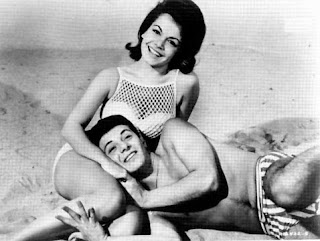 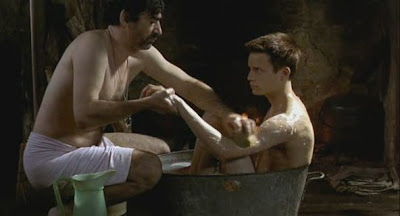 Alice convinces her impotent boyfriend Luc to kill a classmate after telling him the classmate and 4 of his friends raped her and took photos. Luc seems somewhat attracted to boy he is to help kill but his weak personality is no match for the controlling Alice. She sets up a very sexual trap and Luc violently stabs the naked, innocent young man while she giddily laughs and watches. After the vicious murder, they rob a jewelry store, hide the body in the woods and... well, then it gets weird.

As it turns out, they have lost their way in the woods and come across a cabin where the mute troll-like wooodsman who owns it, traps them in a basement. Suddenly, we are watching “Hansel and Gretel”. The film becomes a perverse version of the well known fairy-tale. The woodsman takes a liking to Luc whom he sodomizes, but otherwise treats him like a preferred pet and leaves Alice to starve in the basement. The woodsman also discovers the murder victim and throws the corpse in the cellar to rot with her. His actions are so horrible that at this point you easily forget what these two have done not so long before. They are so cute, small and innocent looking, you almost can believe they are simply harmless victims... at least compared to their captor.

They do escape and en route away from the cabin of horror, make love in the woods while animals watch in a heavily Disney referenced scene... making it, to say the least, somewhat disturbing and uncomfortably humorous.

This film, despite it’s gruesome subject matter, is beautiful. Much better than Ozon’s first film “Sitcom” and maybe better than his films that followed in many ways. This is one film you can not easily peg down in any sort of category and leaves you unsure what you think, not just about the film, but many other things long after it’s over

Posted by Behemoth media at 10:34 AM No comments:

It's LONELY at the top 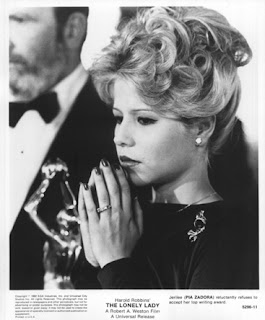 If it actually WAS on DVD -- the DVD menu should be exactly like this.

The Grim Reaper Wants YOU!

These ran on British TV in the 70s - check the reader comments. 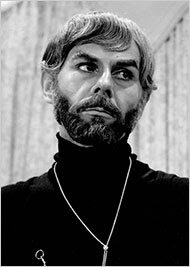 In the English speaking world, he was best known for his roles in three Mel Brooks films, The Producers (1968), The Twelve Chairs (1970) and History of the World, Part I (1980).
Voutsinas became the original Carmen Ghia after befriending Mel Brooks' girlfriend of the time Anne Bancroft. She recommended him to Brooks and said Voutsinas would be perfect for the part. When Voutsinas was cast as Carmen Ghia he had a thick Greek accent and had just moved from Greece to America. He resided in France and has appeared in many French and Greek films including Safe Sex (1999) and Le Grand bleu (1988). Voutsinas also ran an acting workshop, The Theatre Des Cinquante in Paris, France.

via Wikipedia
Posted by Behemoth media at 3:46 PM 1 comment:

Well, what do you know? TCM is releasing a Charlie Chan boxed set. I'm a big Chan fan, having spent many insomnia-riddled nights working my way through NY's Ch11 run of all the Chans - Oland, Toler, and Winters (hello, a Swede, a Scot and a Bostonian?) until they finally switched over to Mr. Moto (a German playing a Japanese!) and Sherlock Holmes. These are two other great loves of mine, but we'll save that for later.

Sadly, these are not subtitled (oh, the joy the screengrabs would bring) and there is nary a mention of Mantan Moreland in the writeup - regular readers of The Slammer needn't guess why. I'm sure that TCM did a bang-up job in restoring the Monogram prints but hell.

Malkovich as a Kubrick Con

Based on a true(ish) story, John Malkovich portrays sad, yet swishy, con man Alan Conway, who attempted to pass himself off as the reclusive director in London during the late 1990's. Unfortunately, he bore no resemblance to Kubrick, nor did he bother to do much research into his life. Brian Cook, Kubrick's assistant director, adds a few subtle (and some not so) touches to the film Kubrick fans will recognize immediately. A fabulous supporting cast includes Honor Blackman, Richard E. Grant and Ken Russell in a mental hospital-as himself apparently!


If anyone upstages Malkovich, it's Jim Davidson as "Lee Pratt":

Posted by Mavis Martini at 6:20 AM No comments: