"I aint got nothin' else planned." 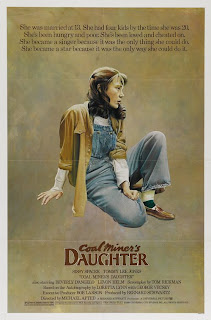 I was 13 when my parents brought me along to the Tyngsboro Drive-In to see Coal Miner's Daughter. I knew nothing about country music other than the pop crossover stars like Lynn Anderson and Dolly Parton. I knew Minnie Pearl was on Hee Haw and I'd heard of the Grand Ole Opry - but had no idea it started at the Ryman Auditorium and moved to a mega concert hall in Opryland circa 1975. I was in for a great education with that fantastic film - which I have enjoyed dozens of times since then.

Oscar-winner Sissy Spacek was so brilliant as Loretta Lynn - aging from 13 to 35 - and going from shy Appalachian waif to granny-gowned Country Diva on the verge of a nervous collapse. The casting was terrific. Levon Helm as Loretta's father whom she adored, Tommy Lee Jones as her husband Doolittle who learned the music biz as they went along - and ofcourse the dynamic Beverly D'Angelo as Patsy Cline at her plateau of stardom and about to be lost forever. Sissy and Beverly did their own singing and they were wonderful in their scenes together showing the mentoring loving friendship between veteran Patsy and newbie Loretta. Patsy's on-stage wink to Loretta while she watches from the Opry wings is a MAGIC film moment.

Without the lovely (unrushed) first act of the film exploring the crushing poverty and insularity of the region - it would have been impossible to understand Loretta's inner and outer journey and then feel the payoff at the end when she reminisces in her song's lyric that - before she fell in love with her husband - she "never thought of ever leaving Butcher Holler."

I'm not the biggest fan of this movie. Sissy's a great actress, but she sure can't sing like Loretta Lynn, and it was LL's singing that made her a star. The early scenes are great, but once Loretta becomes a success the movie seems to run out of steam. Her onstage breakdown scene pales in comparison with what Altman did in Nashville. The scene where Barbara Jean flips out on stage and has to be led off by her husband/manager is even better than the scene where Joan Crawford discovers the dead rat on her dinner tray in Baby Jane.