In the summer of 1975, my hairdresser aunt took me and my brother to a Corman/Demme directed double feature: "Eat My Dust" was first, capitalizing on Ron Howard's "Happy Days" fame:

followed by Cloris Leachman in "Crazy Mama." I loved it from the get go: take a look at the credits! In addition to Leachman, there's Stuart Whitman, Jim Backus, Tisha Sterling, Ann Sothern, Linda Purl (Howard's "Happy Days" costar Donny "Ralph Malph" Most was billed as "Donn Most" - an attempt to be taken seriously, I wonder?) and Corman faves Sally Kirkland, Dick Miller, Bryan England, and Clint Kimbrough.

No wonder it had such a big effect on me:

Cloris Leachman stars as Melba, a woman with whom violence is a way of life, in Jonathan Demme's high-pitched "B"-movie Crazy Mama. The film spans three decades in the violent life of Melba, beginning in Jerusalem, Arkansas in 1932, when law enforcers kill her father (Clint Kimbrough), turning her mother Sheba (Ann Sothern) into a bitter widow. Mother and daughter take off to Long Beach, California, and the time jumps to 1958, when the two are thrown out of their beauty salon for non-payment of back rent. Melba now has an attractive (and pregnant) teenage daughter Cheryl (Linda Purl). The three generations take to the road, stealing cars and creating general mayhem across the United States, robbing a motorcycle racetrack box office and a bank. But in 1959, Melba and Cheryl are picked up again, running a Miami Beach snack bar, their lives wasted in free-living terror. 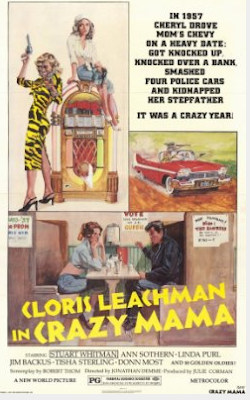 Oh my god, I think I saw that same drive in double bill. Too funny! Conqueror Worm, Blackula and Frogs was a triple bill that made an impression on me.

I didn't realize the irony of the fact that it was my hairdresser aunt that took me to see a movie about criminal beauticians until years later, but it all makes sense now!

Love this post.
I too am a big fan of Crazy Mama. It once was shown a lot on Cinemax or Showtime in the wee hours. I need to get a copy of it. Eat My Dust - I've never seen. I'll be looking for it too.

I miss this kind of redneck cinema..I think Car/Road movies must have edged out the Westerns there in the early-mid 1970s..Dirty Mary Crazy Larry and Macon County Line are a couple of my faves!....White Line Fever!.I saw alot of these at the drive-in..

I was there that weekend too - the other screen had G-rated Disney fare and while I was watching Benji or Witch Mountain -- my teen brother was looking out the back window at the 2nd feature EAT MY DUST!