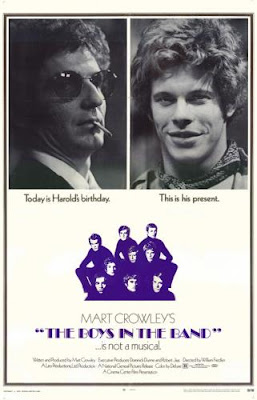 Mart Crowley's The Boys in the Band will (finally) be released on DVD in May 2008!

Written for the stage before Stonewall and produced for film while the riots happened, this film was one of the first to include a nearly entirely gay ensemble. Considered by many to be a landmark in gay representation in cinema, it has left many confused as to why it took so long to be released on DVD.

Historically and politically significant despite (or because of) the pervading self-loathing and wallowing self-pity of its gay characters, The Boys in the Band is a stage-bound, hyperventilating comedy-drama about eight friends who get together for a simple birthday party. What ensues during the course of the evening are enough emotion, acid-laced barbs and self-analysis to last a lifetime.

The film starred the entire original stage cast, many of which have since died of AIDS related illnesses.

Here is the roll-call:

"What I am, Michael, is a 32-year-old, ugly, pock-marked, Jew fairy. And if it takes me a while to pull myself together and if I smoke a little grass before I can get up the nerve to show this face to the world, it's nobody's goddamn business but my own."
-Harold, on explaining his lateness to his own birthday party
Posted by *Mark* at 5:48 PM

I have to say... I hate this film. I know it was ground breaking at the time, but even at the time I found it's self loathing characters intolerable. Still, it is a film that needs to be out there, seen and discussed... finally people can do that!

I like wit and barbs and vibe of act 1 --
tho I admit, the act 2 telephone 'truth or dare'-type soul crushing game never hooked me.