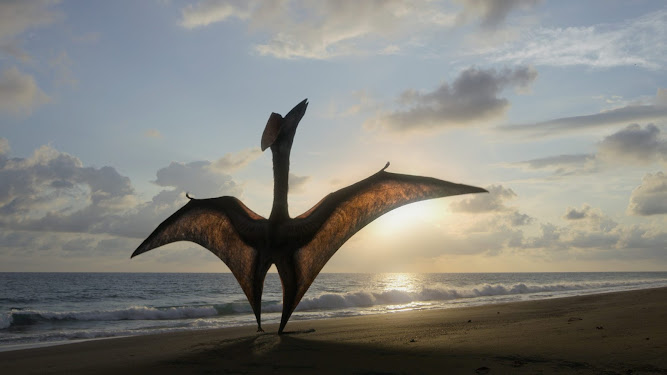 One o the many projects that David Attenborough is known for is the BBC "Blue Planet" series that stunned the public with amazing nature photography and visuals and had interesting but not too much actual information. It relied heavily on the never higher quality of the video over everything else and it worked. Keeping the fact dumps to a minimum and just letting the public see and experience nature brought the wonder and curiosty of the world around us to the masses. The same can be said about this doc-series. It looks like Blue Planet, it sounds like Blue Planet (thanks to Attenborough's narration) and this a very good thing.

To be sure there is some pretty out their speculation about the behaviour and physical characteristics of long extinct animals in this and it can throw you a little from tie to time. None of that is just pulled out of nowhere, there are legit reasons to think some sauropods might have had weird inflatable bubbles along their necks, but maybe not enough reasons to include it here except for the chance to show it visually. Showing it visually is the point of this series and it does that by combining fantastic real world high def video with some of the best computer generated dinosaurs ever on the screen. The 5 chapters are broken up into environments, like forests, fresh water... etc. none of which has much of link to the action on the screen. It is an interesting way to break up the episodes even if it just doesn't mean much in the end.

It would be natural and almost obligatory to compare this to the previous king of dino-docs, "Walking with Dinosaurs" , which has been the high bar for showing long perished animals on our TV screens. I prefer the framing of "Walking with..." over this, but 22 years later the information in that show is out of date. I can't say it's aged poorly though. It still reads as real life because of the how they filmed each shot as if a real crew was there, including "mistakes" and bringing a natural look that sold the idea that these were actual living breathing creatures. "Prehistoric Planet" is similar but almost too perfect, much as "Blue Planet" was in that the clarity and colours. This is not a criticism, just a difference in style I would say. This new doc does a great job with the dinosaur designs and updating them with the current  and likely much more accurate ideas of how these animals moved and looked. The raptors and flying reptiles are outstanding and look as present as anything you might see filmed in a "real world" production.

Posted by Behemoth media at 5:55 AM