The Raven (2012) Directed by James McTeigue 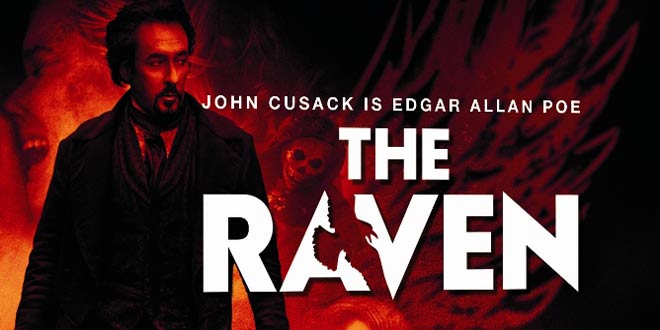 I have to admit I was dreading watching this film as I am huge Poe fan (I have made several animations based on his works) and I heard it was terrible. Maybe my low expectations elevated this to be better than I imagined as I found myself liking more than anticipated.

The Raven is one of those speculative history ideas, the kind that take a well known historical figure or event and then put that into a new story, usually modernized to a certain extent but try to keep it in line with the real event or the real details of that person's life. This is pretty much what we get, Poe's stories are being used against him as a mysterious person using them to commit horrible murders. The details of one Poe murder lead to the next and it is revealed that the killer is trying to get to Poe for unknown reasons.

The film starts and ends on overly pretentious filmmaking tropes. A little over the top and on the nose for my tastes, but as the movie goes on, I did get drawn in and it didn't bore me. I know too much about the main character to believe any of it could be real and John Cusack in the role didn't sell it enough for me to see "Poe" but rather someone with his name. The problem mostly is the dialog is not very period at times and while Cusuack is OK and some of the other performers are pretty good, you just don't buy it as a period piece but more as an alternative reality piece.I rather liked Luke Evans as the detective. He was the best and to me the actual main character. He could easily go on to make more movies in this role and they almost set the end of this up for that - but next time it would be Jules Verne in place of Edgar Allen Poe.

Costumes and sets are great, the filmmaking is a little artsy at the start and finish but very well thought out in the middle and calls less attention to itself and more to the story. The story kept my interest but it really doesn't hold up to scrutiny and just too preposterous to quote another critique to make you really feel anything for what is going or keep any real suspense. The resolution, if you can call it that , is  ahead scratcher in the worst sense... it just doesn't make any.

Overall, I can't say it's as bad a movie as I was led to believe but that doesn't make it a good one. just Mildly entertaining and distracting with some potential that never gets realized. I guess turning Edgar Allen Poe into an action hero of sorts isn't such a great idea in the end.

Posted by Behemoth media at 7:23 PM