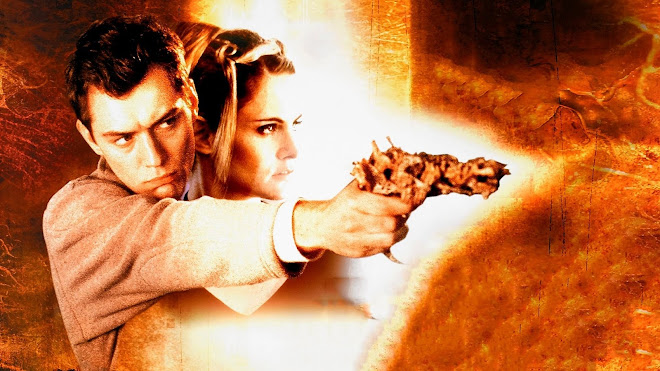 The premise of this film is that a group is about to test a new advanced gaming system, a suitably Cronenbergian bio-based system that plugs unto your spine and take you into a virtual reality. Someone from a group against this sort of thing has snuck a biotin... made with bones and body parts and uses it to try and kill the developer of the game played by Jennifer jason Leigh. Her "bodyguard" actually a marketing rep (Jude law), drives off with her after the would be assassin is killed by others in the group who seemed ot expect this sort of thing might happen. the rest of the film progresses though a plot where what is in and out of the game is murky at best and there are so many twists and turns it's hard to keep track of them all. I don't think it's fair to spoil the film's endings but if you hav seen a certain number of films like this I don't think you might have figured it out long before the final shot.

This film does harken back to  the earlier, and much better, Cronenberg film Videodrome and the bio gun here seems to be a direct reference to that movie. While this project has a great cast, they sort of sleep walk their way through to film I thought, maybe in an attempt to make it harder to figure what real and what's part of the game. It's not poorly made, the visuals are nice but lack the sexual perversion that made Videodrome transgressive while this comes across as a standard story in a story or dream within a dream that didn't leave me satisfied or even mildly surprised at the end. The gameplay in the story does not come across as credible - I am not a big video game player but this makes me wonder if anyone involved ever played an immersive game or only just heard about them second hand. 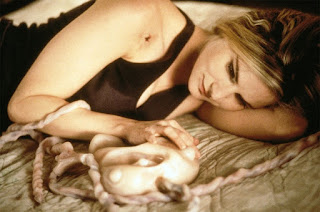 I do love Cronenberg as a director but this one misses where it should hit and he seems to be playing off his own tropes in a way that oddly makes it predictable and a little dull. It has a pretty low budget for such a tech oriented film and still did not make a fraction of it back at the box office.

Posted by Behemoth media at 2:10 PM