The Rise of Skywalker (and the end of Star Wars) 2019 directed by J.J. Abrahms 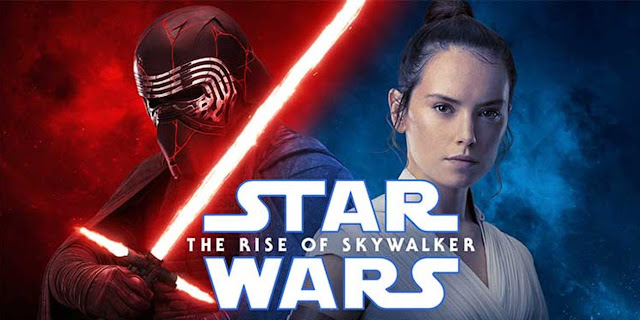 I won't belabour too much of the plot of this film which pretty much everyone in the known universe has seen already it. It ends the 43 years long Star Wars Saga and opens the way for new stories while tying up the loose ends for the original series characters. The First Order it turns out is being controlled by the old, presumed dead Emperor from the middle trilogy of the series and that Rey is somehow his grand daughter. The resistance must find his hiding place and hope that they can inspire the regular people to rise up and help them destroy a new fleet of star Destroyers, each with the ability to destroy a planet much faster than the previous Death Stars could. Klyo Ren is trying to turn Rey to the dark side of the force and have her rule the galaxy with him. This all ends in a SPECTACULAR space battle.

This film suffers from cramming in too much plot as most blockbusters these days do. Things move so quickly and back forth that its becomes hard to keep track of what is important or even what is going on all the time. The film is chock full of fan service as well, which would be more annoying if this wasn't the end of the saga and there was no escaping pulling every reference and minor character they could out for the final outing.

Even for a movie that takes place a long time ago in a galaxy far, far away; there is a lot of inconsistency in the world building and far too many convenient plot points and red herrings designed to pull at the heart strings that lead to nothing. I am not sure there was ever going to be a way out of those problems as tying up a generations spanning storyline in a pleasing for everyone is an impossibility. We do get a solid enough, exciting film with great effects decent acting and a conclusion to most of storylines introduced over the last 40 years. It avoids going to three prequels for much source material or inspiration which is truly the best decision they ever made. I tried to rewatch that trilogy and ended up tossing all three. They don't add anything, and in fact, take away from the series as whole. The film's pace and dependence on action does rob us of moments that should have been more impactful. The death a Lea was handled well enough and since it was brought about because of the real life death of actress Carrie Fisher before this film was made, it cannot help but bring a tear, but the relationships even after three films were not established enough to give a real emotional punch. We were promised that Carries Fisher would not be replaced by a digital double and they didn't... sort of. There is no CGU replacement for the current version of Princess Lea but in a flashback there are digital versions of Luke and his Jedi in training sister that leaps right out of the uncanny valley and into your nightmares.

Ranking this within the current trilogy I would say the first "The Force Awakens" was the least successful as it simply rehashed "A New Hope" from the first film. "The Last Jedi" was pretty fairly unpopular among super fans but I think it went in some interesting directions "Awakens" should have gone. This one is more on par with "Last Jedi" for me but with better acting and higher stakes. It should be noted that the "controversy" of this last trilogy is mostly overblown twitter nonsense and trolls looking for attention. They all made a boatload of cash and brought in new and old fans. They were never going to satisfy everyone, everywhere as basically the entire planet has ideas what Star Wars is about. To say any of them were terrible or silly means you never saw the prequels or know what an Ewok is. The entire storyline has always had its problems since the start.

Overall this isn't a bad film by any means and likely the best sort of send off these characters were ever going to get. I was surprised at how little was spoiled for me ahead of my watching it, months after the release. To me, that says many people who may not have got the film they imagined, liked it and those who followed the series enough not to ruin it for new viewers.

Posted by Behemoth media at 4:01 PM