Won't You Be My Neighbour? (2018) directed by Morgan Neville 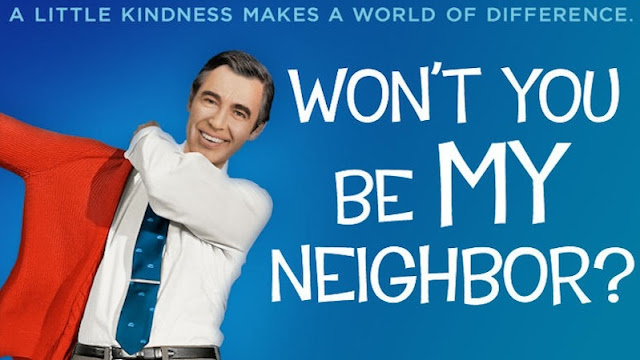 It would be easy to dismiss the work of Fred Rogers, Mister Rogers as he more commonly known as frivolous children's TV fair, but as this documentary shows , his work was so or important and cutting edge than many remember.  Fred Rogers was a TV icon and trailblazer for children's entertainment.  His understand and unflinching dedication to the needs of the young people of the nation was nothing short of amazing.

We all have memories of the show, the puppets, the sweater, him taking off his shoes and putting on his sneakers when entering the set - but the show, as this documentary shows, he went far beyond anything we have today in terms of what subject matter is acceptable for those youngest minds among us. Rogers tackled discrimination because of race like no one else could. He invited his black mailman to share his kiddie pool with him, going as far as to dry the man's feet when they were taken out of the water. This was at a time public pools were throwing bleach on black people who dared to cool off with white folk on hot days. He discussed the assignation of Robert Kennedy... what kiddie show could even attempt to tackle that now? Mister Rogers was often the subject of parody (which he found often funny) and the work he did was often overlooked but the impact he had on generations is unmistakable. He was a tireless advocate for fairness and accepting people as they are, Oddly he shared many philosophical traits of the Satanists in the film "Hail Satan" I just reviewed here at the Slammer. His way of getting his point across was MUCH less aggressive, however.

The film goes farther into his life than the recent Tom Hanks film does and even covers his conflict over the actor playing the policeman being gay which isn't really covered in the Hollywood version of his life. As you can imagine, Rogers walked the walk and talked the talk when it came to accepting people as they are. Sadly, there weren't and certainly aren't many like him out there and I would say none like him in the present media landscape. How many of them would you want to have as neighbour?

Did I mention the Fred Rogers pretty much saved PBS single-handed by appearing before congress? Seriously you owe it to yourself to see how wonderful this man was, flaws and all. It will make you want to be a better person and that was all Mister Rogers would ask for as his legacy.
Posted by Behemoth media at 4:48 PM 2 comments:

This took a while and a lot out of me. Lots of sad memories and a few happy ones thrown in for good measure. Thanks again to Mike Luce for his wicked laugh, and he didn't even ask what it was for!

This is sort of more "epic" as well as personal for me in animation. 15 locations that all had to be designed and made and then populated with two real-ish looking humans.

This is not a documentary. I wish I was still in shape like the cyclist in the animation is 25 years later after taking care of my friend but many of the events did happen. I won't bike to Boston as I planned but I will go there this spring/summer. A bike tour would take almost a week and I don't have the funds for a week in hotels, then time in Boston and then find a way to get back home with my bike. In a way this is my attempt to come to terms with the events all those years back, it was a very tough time and I though I helped out one friend for six years, there were  others for shorter periods and some of that is reflected in this as well.

Some of you might recognize certain locations... like my office, street, the bridge and several locations in Boston. Nothing is slavishly reproduced but even the biking scenes are based on several trips from Boston to Montreal.

If you see this and have opinions, tell me and watch it on You Tube, give it likes etc. I would like it to be seen and promoted somehow so please refer others to it if you think it's appropriate.
Posted by Behemoth media at 1:38 PM 2 comments:

Divided by One ()2020 directed by Jacob Kafka


This short film was made by a developer of the app "rough animator" which I own but haven't used yet. It has a lot to recommend about it.  T

he short poignant and very done and since we always encourage these one man bad sort of projects here in the Slammer, I thought it would be nice to share it here.

If you have even a passing desire to try out 2D animation... BUY IT! It's only 5$ and well worth many times that!
Posted by Behemoth media at 10:09 AM No comments:

Update for 2020, includes some unfinished projects I thought might be interesting.
Hire me !
Posted by Behemoth media at 1:16 PM No comments:

28 Young Men, a short poem by Walt whiman read by Michael Z. Keamy and animated by me (Behemoth media).

The project has been several years in the making. Originally we wanted to do live action and scouted and filmed several locations. As time went on, it became clear that getting 28 make men to splash around on a beach for free was not really a realistic option. We needed a secluded place and no trouble from local authorities. So animation was the voice in the end.

The men barely move, (and no there are not really 28 of them but I am not exactly Pixar so we never see them all at once), the idea being they are frozen in the woman's fantasy as she imagines herself moving amongst them. The beach and house are loose representations of Newburyport where Keamy are up and had specific locations in mind. So the advanced filming came in handy when it came to making the sets.

The water effects were done with X-particles for Cinema 4D and look pretty good to me. they are not meant to look like real water and match the cartoon look of the ocean waves.

Warning, I guess... cartoon nudity.
Posted by Behemoth media at 3:25 PM No comments: 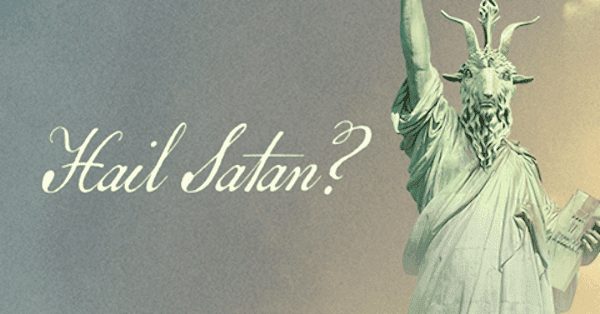 When you hear the word Satanism, what do you think? Since the ridiculous "Satanic Panic" in the 1970s, the word has brought to mine child abuse, murder, demons from board games and  variety of other things that - to be clear - have NO basis in fact.  So promoting the Satanic Temple as positive force in the world seems like an uphill battle, to say the least. Penny lane's excellent documentary does just that, however.

Started more or less a joke, the temple has expanded by leaps and bounds, mostly due to their work in promoting religious freedom in the USA. In some sense they are the ultimate trolls, when a city or state decides it needs a 10 Commandments monument or giant cross on state property, something that is 100% illegal and against the constitution, the Satanic Temple steps in with a massive, beautifully done Baphomet statues to go beside the Christian symbols. It is an effective way to get the point across that one religion should not be promoted over all others.

The spokesperson for the Temple is Lucien Graves and while he looks the part, talks the talk and walks the walk, you get a clear impression he does not like the role or the attention on him personally.   "Are you excited about the protest today?"the interviewer will ask. "No" is the one word response from Graves. He does, nevertheless make an effective spokesperson for the movement and handles hostile interviewers with a reasonable calm I am not sure many other people could.

Well paced and not one sided, in the sense that is covers schisms in the Satanist movement and goes over it's often spotty history, the film give the viewer a solid sense of what the actual beliefs of Satanism are and what they are trying to achieve in a country the reads of christian religious privilege. Satanists are not perfect as a religion by any means but their rules to live by are more than reasonable, fair and based in the real world. If you read them without knowing they were the rules of the Satanic Temple, you might think all religions should adopt them immediately.

Satanist as promoters of justice and equality might seem like a strange idea after decades of misinformation, but you will likely be convinced by the end of the 95 minute run time. You may not want to run out and join your local Satanist Temple chapter, but you will more likely than not agree with most of things that are trying to accomplish.
Posted by Behemoth media at 6:56 AM No comments: