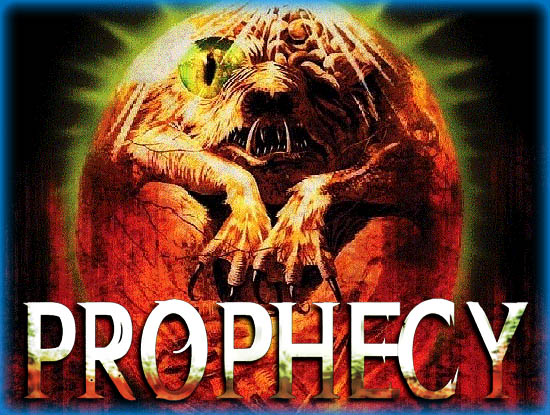 In a Halloween special review, the Celluloid Slammer brings you Prophecy... a late 70s horror film that is basically about a mutant bear attacking people. The mutant part is brought about by about by chemicals that are changing the wildlife into improbably deformed creatures. For example, a fish that eats a duck.

I saw his film in the cinema, the Everett Park Theatre outside of Boston, with much anticipation from all the full page ads, TV spots and trailers I had seen. Some mentions were made about being more of a thinking man's horror film with a message. That message was pretty much the same one as in Godzilla VS the Smog Monster, basically - don't pollute. Sadly thinking is not something the writers of this movie did much of, in my opinion. There are some suspenseful scenes at the start, a mystery about killed loggers and the introduction of a Native American legend possibly responsible but that all gets forgotten when we are face to face with the terrible man in a mutant bear suit. The lead up is for something big and horrifying and that bear isn't those things. It becomes unintentionally campy as it goes on, culminating on the best scene ever filmed in motion picture history.

Even in 1979 I was rolling on the floor and to this day I have friends who will bring up as one of the stupidest things they have ever seen in a motion picture. Did that kid sleep with explosives? Seriously, that sleeping bag pops like a balloon!

See this movie? Maybe don't unless you have a banking for bad horror films or monster movies. It's all of clichés, bad acting, worse effects and even ends with the audience being made aware there is another mutant bear about, ready for a sequel. Thank goodness, that never happened!
Posted by Behemoth media at 12:00 PM No comments:

Tell Tale Heart at Another Hole in the Head film festival! 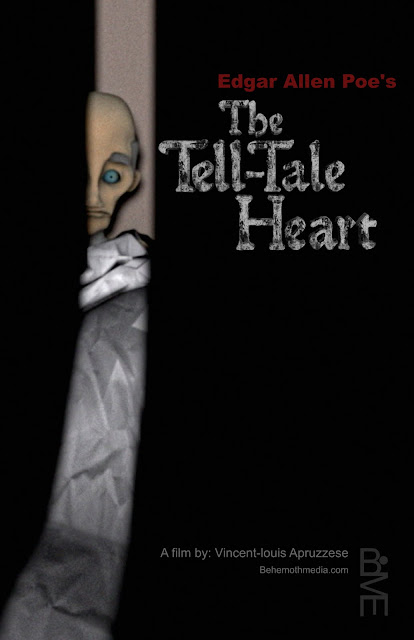 This year, the Another Hole in the Head film festival has chosen my short animated adaption for Edgar Allen Poe's The Tell Tale Heart to be part of the films shown!

If anyone is close, please go and be sure to mention to everyone how much you love my movie! I would like to keep making them and word of mouth is about all I can afford these days to find support for them! 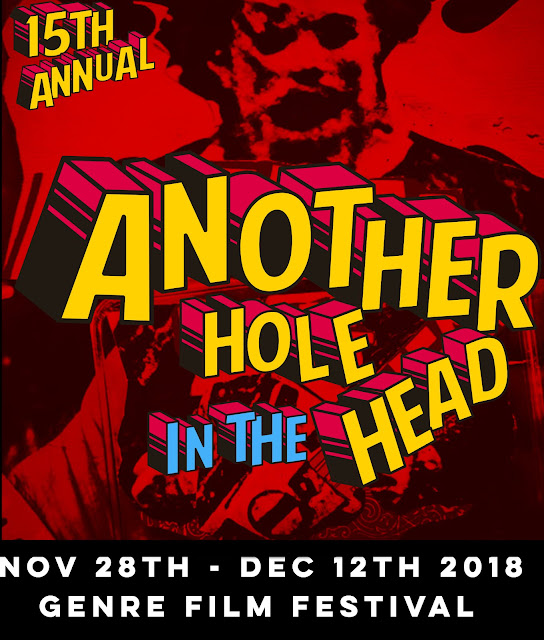 Posted by Behemoth media at 10:02 AM No comments: 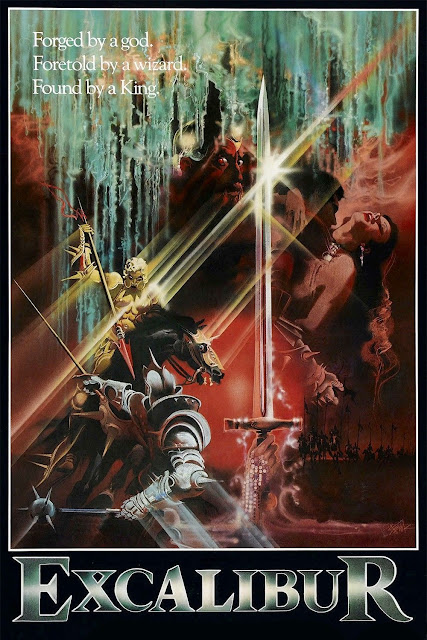 John Boorman's attempt to put the Arthurian legends into one coherent film was an enormous effort, one that I think pays off.

The film was a big success, something Boorman really needed after the failure of Exorcist II - the Heretic bombed at the box office. It was also a passion project for him and getting it on the screen was one of his most impressive accomplishments. Not everyone was sold on his interpretation of the legend or on the merits of the film - some saying the dialog and characters were poorly rendered but pretty much across the board, it was lauded for its visual style.

The story is more centred around Merlin than Arthur which is a good choice as Merlin has first hand knowledge of much more going on than Arthur. It also allows us to see some back story of how the sward Excalibur is given to merlin form the Lady of the Lake and ends up in a stone and only able to be extracted from that stone by England's future king.

Arthur's personal tribulations of betrayal and ego lead to Morgan, an evil sorceress imprisoning Merlin and causing the kingdom to wither and die. Arthur has caught his wife sleeping with his best knight and friend, Lancelot and left Excalibur stuck in the ground between their sleeping bodies. Arthur goes on a quest to find and drink from the holy grail which restores both him and the kingdom to health. On his return his wife returns Excalibur to him and they reconcile. Lancelot, non the other hand, has left the kingdom out of shame and guilt from betraying his king and friend. 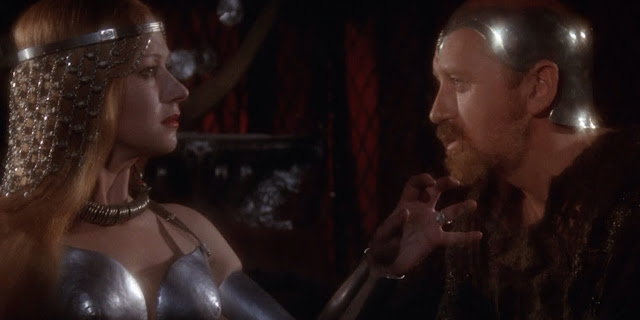 Meanwhile Morgan and her son Modred, whom she has produced from an incestuous relationship, have gathered their forces against Arthur and his remaining knights. Merlin tricks her into using up her powers and she loses her eternal youth, becoming an old hag. Her son, disgusted by this, kills her and goes off to conquer the kingdom. He is defeated by Arthur with the help of Lancelot who has returned to redeem himself in Arthur's eyes and the men reconcile in time for Lancelot to die with a clear conscience. A bloody battle between Arthur and Modred leaves Mordred dead and Arthur about to die. Before he passes into legend, Arthur manages to make his way back to the Lady of the Lake and returns Excalibur to her. He is last seen lying on a boat attended by three maidens on their way to the isle of Avalon.

This film is gorgeous. And I disagree that the characters and dialog are low points. It all works together to make a dreamlike spectacle that while it might be hard to keep ahold of the plot at times, like most dreams, makes its own sort of sense.

It started the careers of future stars like Patrick Stewart, Liam Neeson and Gabriel Byrne. Nigel Terry makes a convincing King Arthur and Boorman keeps the supernatural and magic elements to a subdued minimum saving the effects budget for elaborate armour and incredible looking settings. The R rated version is pretty bloody,  but the explicit sex scenes with Nicholas Clay's full nudity is more likely the case for the adult rating. He pushed that further in Lady Chatterley's Lover with full frontal. So - not a shy boy. Not a bad actor either, his performance in this is a great asset to the movie. 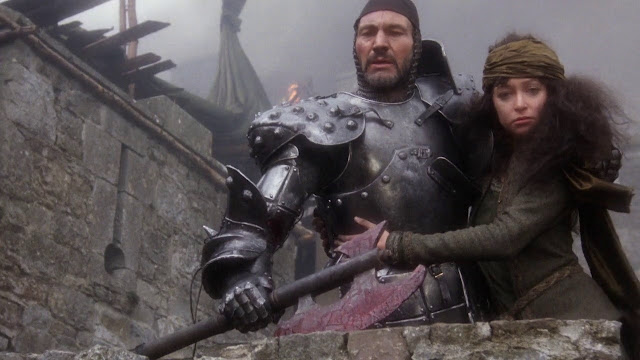 This film really holds up to this day, Partly because of it's timeless setting but mostly because of the director's decision to focus on elements like character, costumes and set pieces instead of magical special effects which can really date a film quickly. it is long, but its also hypnotizing from start to finish. 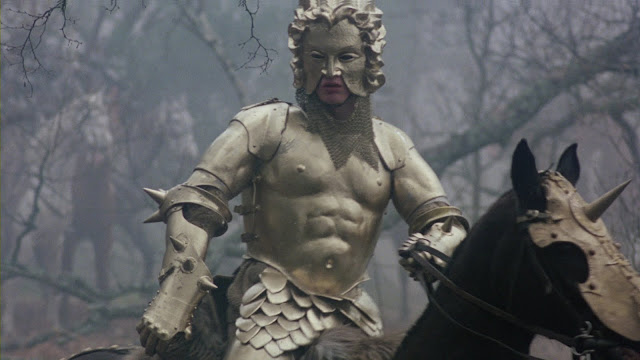 Posted by Behemoth media at 10:57 AM No comments:


This time out, Charles Webster Billingsworth the 3rd warns about the side effects of acne medications in his own dramatic style, of course.

Mike Luce again provides the voice and we pushed the performance farther this time. It's a third longer than other shorts with him as well. I originally had all the side effects of isotretinoin in the script and read out but seriously... the short would have been twice as long! I also took out things like suicide which while I could have made a joke from it, I decided against it and cut out some repetitious symptoms as well for time. It's not a real PSA afterall and I don't think Charles screaming every single symptom was really necessary to get the point across!
Posted by Behemoth media at 5:45 AM No comments: