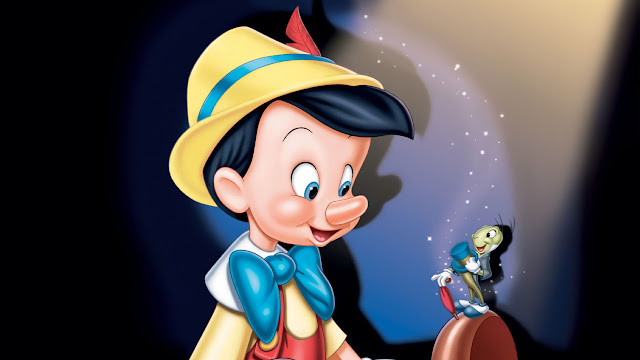 After the success of Snow White and the Seven Dwarves, Walt Disney went to the Carlo Collodi story The Adventures of Pinocchio (1881-1882). The film strays, like most films do, form the source material in many ways (the blue fairy for example plays a much more central role in the story) but the basics are still there. A lonely woodcarver, Geppetto carves a puppet out of a talking piece of wood and the puppet then spends the rest of the story trying to become a « real boy »  after learning this is possible through the intervention of the blue fairy and with the help of a friendly cricket. In Collodi’s version, Pinocchio kills the cricket almost immediately. This does not happen, of course in the Disney version and the puppet has a series of adventures that lead him back to his father and the realization of his dream to become human.

This is one of, if not the most satisfying of all of Disney’s films. Made for about 2.3 million it has made about 84 million at the box office total but was a flop at the start pulling in less than ½ of it’s budget on first release. By 1994 the film was added to the National Film Registry in the USA and Time magazine has put it in the best 25 films of all time.

The script moves from one adventure to the next with great skill and the animation is rightly considered some of the best ever done. The songs and background designs are top notch. Many breakthroughs in animations were brought about by this film. Disney had 3D models of the characters and set pieces made so the animators could have realistic perspectives to work from, early forms of rotoscoping and integration of stop motion were used to add realism. The opening shot where Jimmy Cricket jumps down the street to Geppetto’s shop window with everything moving in parallax is truly amazing. There is a story that having spent so much time getting this scene right, Disney was very disappointed it did not get the notice it deserved and was upset when a boat shot in Peter Pan,done with the simplest of techniques, got an ovation, prompting him to swear to never do anything as complicated as Pinocchio’s opening shot again.

The movie pushed special effects animation past it’s limit. The fairy dust and especially the water effects are so impressive that I would take them over 3D simulations any day. The backgrounds are beyond amazing. I saw a few at an exhibition and they were not only just beautiful paintings but the ability to draw them in ways the camera could pan across them and give the impression of turning a corner or zooming in... all through use of perspective tricks on one canvas was mind boggling.

Obviously it is on my top list of films ever made, I never get tired of seeing it and get choked up every time I see Pinocchio face down in the water after saving his father from Monstro the evil whale. I can’t explain why, but that simple shot is always a shock to me. The entire film is memorable from start to finish.

In the last few years, Disney Studios has been making noises about a live action film, as it has done with and plans to do with many of it’s other animated classics. Please… don’t. Re-release the original in theatres instead and let new generations experience how magical it is. 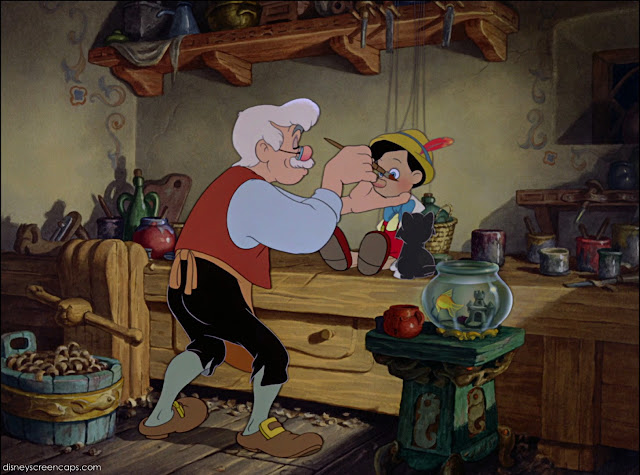 Posted by Behemoth media at 6:31 PM

One of the big problems with Pinocchio's release is that WWII had started which cut off a HUGE part of Disney's audience. He wouldn't regain it til the 50s. I just read a huge Taschen book on Disney and this was a major point about this film. I agree, where Snow White was an amazing debut, this movie really took things to another level. And it's SCARY! The sequence on Pleasure Island is REALLY CREEPY and I bet a lot of small kids today would freak out at that. And then there's Monstro. The only part that feels a little weird is Honest John and his cat buddy being animals. But animation and artistry probably never got better from Disney. It's lavish and really Art.

I don't think I realized that! It makes total sense. I think it's one if not the best animated film ever. it just works on every level and has some really weird stuff. Like Honest John and his pal... they are the ONLY characters that are talking animals, all the rest act more or less like real animals or are people. Jimmy Cricket is sort of a magical exception I guess.