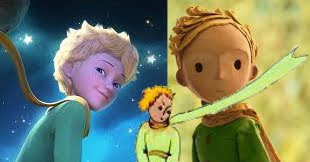 The many representations of the Little Prince

A few have taken up the challenge to adapt Antoine De Saint-Exupéry’s Le Petit Prince over the years with varying degrees of success. It has been everything from a musical to a TV show. In 2015 Mark Osborne took on the story in a novel way that is very much worth watching even if it's not entirely successful in every aspect.

This film is not about telling the story in the book, it is the story of a young girl with an overly driven mother who learns and is inspired by the prince's story through her eccentric neighbour who has written up and illustrated his experiences with the title character. Her mother does not approve, of course, and throws the pages of the story and the toy fox the old man has given her in the trash. When the man is hospitalized, the young girl goes on an adventure to find the little prince so he can be reunited with his old friend. 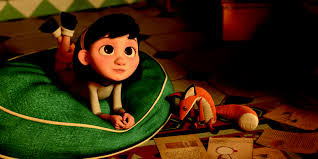 This is an animated film, mostly CGI for the main storyline but also in stop motion to represent scenes taken directly from the book. Both work, but the stop motion, done with paper puppets is beyond exceptional. In fact, it might be too good as it overshadows the "real world" to the point I wanted to only see the original story from start to end and lost interest in the little girl’s part of the film. I also found the part where she searches for the little price to be a distraction, well done and as amusing as it was. There is just no competing with  Saint-Exupéry’s children’s book and I felt the lessons of his story got forgotten and lost by the end of the movie. I will not spoil it completely as this is still something really worth seeing, but the script leads up to a very real emotional moment which it throws away for something more family friendly and happy. The mother also has a change of heart about the old neighbour, but its hard to know why except that it was important to put her and daughter in the same page before the end titles rolled. It was nice they didn’t make the mother into a monster, you do feel she want the best for her little girl but has lost touch with what makes childhood magical to many.

In both the stop motion and CGI worlds, the fox shines as easily the most endearing character. It hard to imagine a more charming and lovable creature and the CGI version steal every scene its in. I WANT ONE!

So, despite some areas I have issues with, The Little Prince has far too many positives to do anything but recommend seeing it. The stop motion and fox alone make it a must see and it is the sort of project we need more of. It takes risks with the source material and animation techniques and promotes a book everyone should read - in my opinion. I have read it in German, English and French, in fact. So while I would have preferred to see a faithful animated adaption, this was by no means a disappointing way to tell the tale. 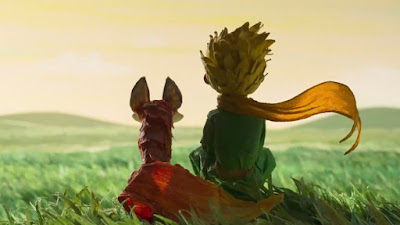 Posted by Behemoth media at 8:06 PM