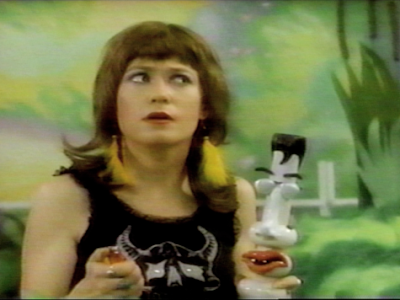 A lost classic of early cable, this almost impossible to see Cinemax Special is AMAZING. I am a fan of Ann Magnuson, so my enthusiasm is expected and this is the project that endeared me to her early on. I recorded it on VHS and it now resides in a digitized crappy looking file on my computer. 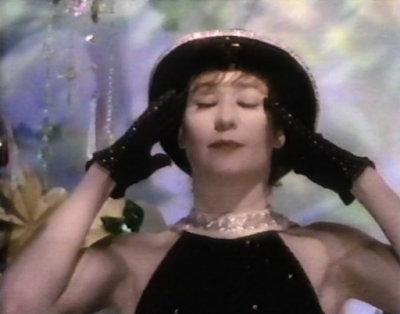 The story is that of a biker chick (Magnusson) on her way to the red-neck-orama (or something) with her boyfriend (Meatloaf) when she has a terrible accident and flies off the bike and into the world of van art. Trying to find her way home before the show start (Vulcan Death Grip - Also Magnuson) she meets version of Stevie Nicks, Gala Dali, Shirley Maclaine and a televangelist (also all played by Ann). The comedy special also has appearances by Eric Bogosian and Joey Arias as Salvador Dali(!). In the end the good fairy (also Magnuson) appears and tells her she had the power to get home all along. Oh and she has a talking bong throughout. 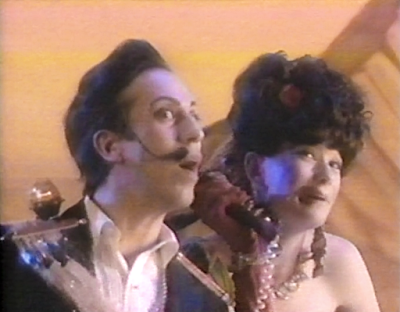 So, yes, this 30 minute of WTF, art references and pop culture parody as only Ann can pull off. I, of course, made everyone I ever met watch this so they would understand why I would occasionally scream « ES SURREAL! » and demand to see the « pizza sex machina ». This may not be for everyone, but it’s wildly funny and out there. So why is is impossible to see now? 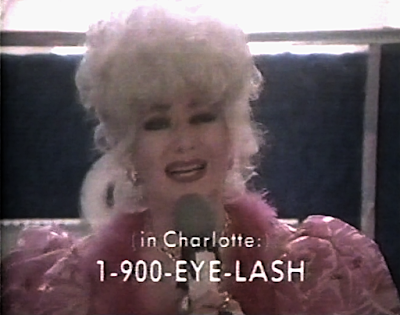 One reason this has fallen into obscurity might be it’s timing. It wasn’t broadcast at a time where Cinemax could have created a cultural phenomenon out of a 30 minute special from a New York performance artist. Another reason was it might have only been shown once because of some odd controversy from one of the jokes. This is all from my not very strong memory, but there were a lot of AIDS activists upset because the bong tells Ann who has just shook herself out of the televangelist character that they better get out of the TV van quickly « before they find out who we are and sentence us to an AIDS camp ». This was an especially sensitive time for people with AIDS… putting them (and all gay people) into camps was an actual plan the religious right was promoting. However, in another case of humourless and misguided outrage, the fact this was a joke bringing that to light and mocking it - not encouraging it was completely missed. Most of the special still dates well enough but I think this one problem will forever sink the chance of this brilliant special ever getting restored and up for sale again. 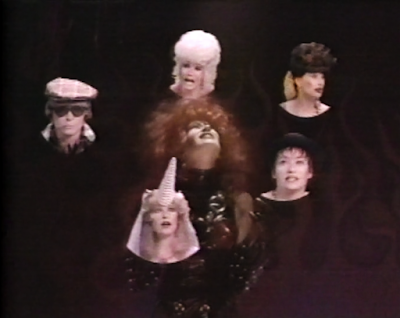 Would you be willing to share the digital copy? My VHS copy finally wore out, and I can't watch it anymore. 😕

I will look to be sure I still have it myself and let you know here.

I would also appreciate if you could share a digital copy of this. I am currently writing a book about Pop Art and Experimental Film, Magnuson and Tom Rubnitz are very important figures for my study and I am dying to see this!

Thanks fro reminding me Tom, I have it and here is a link that will be good for a bout 2 weeks. I think this Tv special certainly qualifies for your book!

OK here is a new link, it can only be up a weekk or so though.
https://www.dropbox.com/s/9ilb6h60xmxu7v6/VANDEMONIUM.m4v?dl=0

Might I convince you to re-up it just once more...for little old me? It's a holiday in hell and I'm wasted.

I was hesitant to upload t again, but you actually quoted the show so how could I refuse!

It will be up for a week or so.

Alright! Thanks so much! This is absurdly hard to find!

It was shown only once, I think and then pulled. I heard it was because of an AIDS comment in it which was in my opinion totally justified as it stated the religious right wanted to put AIDS people in camps... which they did! I ony have because I recorded it on VHS at the time!

That's lame...I'm sure it's just languishing in a vault somewhere and the studio that owns the rights doesn't even remember it exists.

I know.. es surrealllll!
I am not sure even Ann Magnasun knows what happened to it, It might be destroyed. I was just weird enough to have recorded it at the time.

Thank you so much! I needed to see this again before the Lord took my poodle home! I watched it just now with my husband of 23 years and he said "Now, suddenly, all of your catch phrases make sense to me. I never understood why you've been saying "Sorry, full up" when there's no space for something."

I know what you mean... no one understands when I order the pizza sex-machina.

and when someone says anchovie the auto-response is "NO ANCHOVIE. ANTS." ;)

Oh my god, Behemoth! Please please please! I need to get a copy of this. Been searching for it for years, and I missed your link by a few days. I spent $80 on a VHS copy on eBay that was basically falling apart and didn't play. This special is one of my fondest childhood memories and I've been dying to see it again. If you could post the link again I would be eternally grateful.

Well I thought I had deleted it forever by mistake but it turns out my backup compulsion saved us all. I had an old backup with a copy still on it.

Thank you so much, dude! You made my day. So happy to see this again after nearly thirty years.

Any chance I could view this? I saw Bongwater on my 19th birthday, I'm 48 now, have seen her perform 10 times since, just discovering the existence of this Special after listening to the wfmu Ann Magnuson sound collage

omg. I had a copy that my parents recorded off of HBO and watched it all the time. I'm constantly telling people about it and despair of the fact that I can't find it anywhere. I know it's asking a lot to have you keep sharing it but, my poodle pepe, he spake to me. Sick as a dog cause he couldnt take a pee. I called on the lord, but not for free. and this is what he said to me: "Just say please really nicely."

OK.. I'll post a link again. I can't help but spread the good word of Ann Magansun.
https://www.dropbox.com/s/0fgph9nrlc49ug6/VANDEMONIUM.m4v?dl=0
This will only be up a week or two.

If you would be so kind to post it again, I will upload it to the internet archive for all to enjoy

Ok on e ore time, please let us know the link so anyone else looking qwill have access! Thanks for doing this!
https://www.dropbox.com/s/yo4rydmthrka1n2/VANDEMONIUM.m4v?dl=0

Thank you! I will run it through some Ai engines and see if the quality can be improved, and I'll put it in the archive and post the link.

If the AI works Imight be the one downloading it again so I have good copy!

Ok, so I've kept my promise:

I ran it through the AI, brought it into premier and did some color correcting, and boosted the contrast, and cleaned up the audio. It's not blu ray quality, but it is an improvement, and it's there for everyone to enjoy!

Thanks for doing this, it looks and sounds much better! now everyone can have access to it!

And thank you for sharing it in the first place. Let me know of any other treasures your might have to need restoring, I've been doing a few on my youtube channel

popoketal: Maybe I can ask you a non related question? I have several films on Amazon video but I updated them to HD recently with subtitles... or rather I tried to. I used Final Cut Pro X to format them but the files keep getting rejected for nonsense reason and they off no customer support so after YEARS of trying I have only updated on of three films. Do you know anything about what Amazon needs or what setting to use? It has been frustrating! No to meant I would like to keep selling my documentaries there!