The Shout 1978 directed by Jerzy Skolimowski 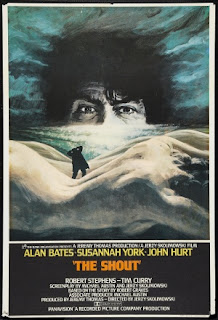 It seems odd to me that this film never reached cult status considering it’s « cult » bonafides. For example it stars Alan Bates, Susannah York, John Hurt and Tim Curry! The film is certainly weird enough and interesting enough to have gained multiple viewing by motivated audiences.  maybe the recent death of John Hurt will bring it more into the public eye.

The story is that of a drifter who arrives in a  small seaside town who is taken in by a young couple. Hurt plays a musician experimenting with all sorts of new ways to produce sounds, a profession that the lifter uses to his advantage by telling the musician that he was trained by an Aboriginal shaman to produce a sound, a shout, that will kill any living thing that hears it.

The mysterious guest, played by Bates, slowly takes over the household including the wife (who has a really bizarre walking on all fours scene) played by York. When the time come to prove his ability… he does, accidentally killing a homeless person sleeping on the beach within range of the terrible shout. 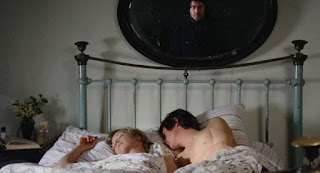 The film is book ended with shots from inside an asylum where the story is being told as the inmates, all of whom are are featured in the story as Bates narrates while keeping score. This story telling device keeps the viewer off guard as while most of the events are shown as a flashback, there seems to be jumps forward and other directions mixed with the dreamlike imagery of some of the shots.

The film is not perfect and from a 2017 point of view, there are some problems with the white guy who can learn and master the powers of the aboriginals. Why would they teach him? Why not just hire an aboriginal actor? I wouldn’t accuse anyone involved with racism by any means, but I also had issues with the « Last Wave » (1977)  for similar reasons even though Richard Chamberlain’s roles was better explained than Bates’ was in « The Shout ». I suspect the casting was more a case of who was close and available for this very low budget production.

This film is somewhat hard to see now, no DVD version in North America I can find. Another site stated it was viable in full on YouTube but that seems to have been taken down.

Never heard of this one, though that is a YOUNG Tim Curry! Sure enough, it's not available in a Region 1 DVD or BluRay as far as I can see. Strange that it's not on YouTube. I'd never heard of it before this.

Very young! I saw this at the Harvard Square back in the day there was a VHS version that was of course in both of the video stores I managed. It did rent regularly once I got people talking about it. Criterion should do a blu-ray, they did Armageddon of all things!