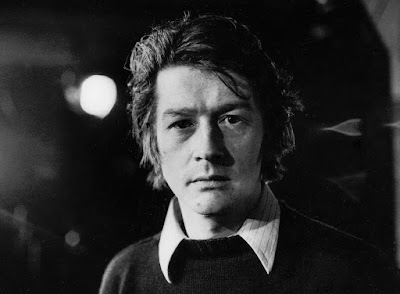 I first saw John Hurt on TV, in the role of Quentin Crisp in the Naked Civil Servant, on PBS. He played Crisp again decades later in the follow-up film about the last years of Quentin's life called An Englishman in New York. It was a great introduction to an amazing actor. Having met Mr. Crisp a couple times, I can say Hurt's performance was so spot on that if the two of them were in the same room and he was in character, it would be hard to tell them apart. It was a role that could have killed his career. Playing a modern gay dandy as a sympathetic person was not exactly in vogue then, nor is it now - to be truthful.

As Kane in Alien, he gave us one of cinema's most iconic images, but after that film he made The Shout - a weird artsy pseudo-horror film that I was in preparation to write about here when the news of his death reached me. In that role as in  ALL his roles, he shined. His presence in even a terrible film elevate it into something worth seeing for his part in it.

As a genre fan, he has given me plenty to look back on. Winston in the film 1984 (which sadly is becoming the actual world we live in), the leader in V for Vendetta where is plays the opposite of Winston, he was Hell Boy's father, the war Doctor in the series Doctor Who and was the titular character in  the film version of the Elephant Man, maybe his most heart breaking role.

He was a great actor who left us with a lifetime of work to reflect, enjoy and relive as we re-watch his body of work in the coming years. I certainly will be doing just that.
Posted by Behemoth media at 7:03 AM