The title of this movie is so iconic, it’s worth noting it was distributed under three other names as well - Leather Girls, Mankillers and Pussycat. The story of this movie is equally random - three go-go girls looking for kicks come across a guy and his gal doing time trials with his sports car in the desert and then race him, kill him and kidnap his girl, in that order. Before they can dispose of her as well, they hear of an old man living in an isolated part of the desert who has a secret stash of cash and concoct a plan to steal it, using the kidnapped girl as a distraction. From there is gets, sexy, violent, complicated and campy; ending in a karate fight between man, killer go-go girl and a truck. 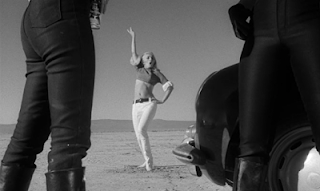 As a Russ Meyers film, this one stands out not only for what it contains, but for what it doesn’t. The film’s violence is sometimes shocking but not gory and there is no nudity or explicit sex. No rape scenes either, thank goodness. It doesn’t need any of that to hold your attention. All the actors are over the top excellent in their roles. The lead is the recently deceased Tura Satana as Varla. Pure evil and one of the meanest, toughest characters ever seen on the silver screen. Meyers outdoes himself cinematographically, using the main actresses own bodies as framing elements much of the time, especially their oversized breasts (it wouldn’t be a Meyers films without them). The dialogue is campy, fast and instantly quotable from beginning to end. The fried chicken lunch scene alone is a tour de force in editing and camp that actually advances the story as it entertains.

Despite it’s reputation as a bad movie, Faster Pussycat Kill! Kill! is NOT a bad movie. A bad film does accomplish what it sets out to do and this movie could never be accused of that. It’s certainly not boring or poorly made, even the sound is recorded professionally and clean. The acting is over the top, as it should be for the subject matter and the actors put much more into their performances than they have any right to for such a low budget exploitation feature. This movie knows what it is and shoves it down your throat with no apologies. As outrageous as the plot may be, it makes sense and moves along faster and faster until the very end. 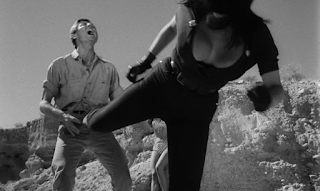 I first saw Pussycat in a revival house in Harvard Square with a couple friends, one of whom was never the same afterwards. There was almost no one in the cinema with us but those that were there gladly came along for the ride. When I ran a video store, I made it a point to get copies to rent to an unsuspecting clientele and was pinching myself when I realized the only way to get Myer’s videos was to talk to him (or Kitten Navidad) directly. I bought them ALL. Ever since I have had regular movie nights with Faster Pussycat in heavy rotation, not always to the pleasure of those attending - at least until they saw it - and then it became a part of their lives.
Why there wasn’t an international holiday declared for the 50th anniversary of it’s release is unfathomable to me.« The point is of not return and you’ve reached it », Varla says, and you can never go back after seeing this flick.

The best film podcast around just did 2 ½ hours about this film:
The Projection Booth

Learn more about my fellow Quebecer, Haji (Rosie in the movie)!
born in quebec!

"Russ Meyer is the Eistenstein of sex films. He is single-handedly responsible for more hard-ons in movie audiences than any other director... Faster, Pussycat! Kill! Kill! (Russ's tenth film) is, beyond a doubt, the best movie ever made. It is possibly better than any film that will be made in the future."
John Waters, Shock Value

"This is the quintessential psychotronic film and Russ Meyer's best. It should have been locked into the Voyager space probe and launched into space to give extraterrestrial life an example of what 'kickin' ass' is all about."
Kurt Ramschissel, Film Threat

"Every inch of the film entertains, from the wild desert drag racing sequences to the sexually charged fried chicken lunch that the characters stop fighting each other long enough to share. Faster, Pussycat! Kill! Kill! has a deliciously ruthless rhythm that few films of such modest aspirations ever achieve-- it could very well be the most finely crafted exploitation film ever made."
Fred Beldin, All Movie Guide
Posted by Behemoth media at 1:29 PM

Ahh, your favorite film ever! I remember when you showed it to me in your condo in Boston. I don't remember the film that well (sue me) but I remember watching it with you. Perhaps I should watch it again though it wouldn't be the same seeing it alone. Good post!

You know the person who was never the same again after seeing the film. Lets say this film pushes some people towards cheesecloth...