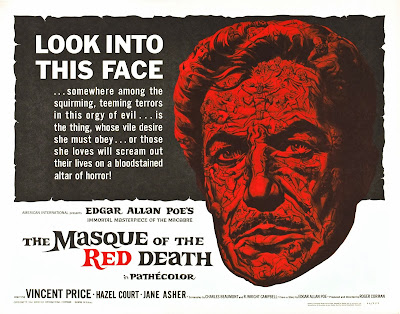 As it is one of the later films in Roger Corman’s series of Edgar Allen Poe adaptions, this film suffers from the cumulative excesses of those before it. The story is kind of confusing mess with no real central character at the centre for the audience to follow and it’s really hard to identify with anyone on this movie.

This is not to say it doesn’t have it’s moments. Vincent Price sleeps walks through his performance, but even so, he’s pretty fun to watch as the cruel Prospero who is one big jaded mess of a man. No matter how horrible an event is, he seems to have a quip ready at hand to say about it and delivers them all in a bored, matter of fact tone.

The romantic couple, who have very little chemistry to start with, are the typical stereotyped «common people» we are supposed to root for but really don’t care much about. they are simply to underdeveloped and overwhelmed by set pieces and Price.

The plot is fairly simple on the surface, the evil ruler of the province, after seeing the red death has arrived in town decides to protect the upper class members of society in his huge castle and wait out the disease as it ravages the outside world. The price for his protection is to be subjected to his every cruel whim, suffer torture and humiliation and eventually dress in funny costumes to amuse him.

Juliana is Prospero’s mistress and like him wants to gain favour of Satan to save them for the plague and give them places of power in hell, or immortality... it’s not really clear. While Prospero tries to gain favour by being a complete self righteous douche bag, she goes another route and take a potion, burns a cross into her boobs and has some sort of fever dream where stereotypes throughout the ages do dance numbers and then stab her. When she awakens from her trance she is convinced Satan is now her husband and gets immediately attacked, for no good reason, by a falcon who pecks her to death.

There is a quick sub plot involving the dwarf jester and a little girl who later on we discover is also supposed to be a dwarf (they dub an adult women’s voice over hers). One of the guests, having slapped the little girl dancer earlier, is humiliated and horribly burned alive in front of the guests in revenge by the jester (easily the best actor in this production). No one is as horrified as they should be and Mr. Price, as his custom by now, makes a quip and orders the mess cleaned up.

The story also has scenes of the captured lovers and the girl’s father escaping the dungeon only to be caught in the act by Prospero himself. It should be noted that he seems to be everywhere at once. He just appears places, in completely different outfits whenever it suits the storyline. It very hard to tell how long the the events presented takes place over... a night? a week?

Throughout this mess,  a red cloaked figure sits by trees, gives nebulous predictions and eventually comes to the party where he is revealed to be the red death itself and, true to form, kills everyone by spraying them with blood and making them do modern dance. He spares the two young lovers (who he reunited, but we never see that - or them- again), a girl that for some reason Prospero decided to let live, the jester and the dancer and some random guy in the village who we’ve never heard of before. The film ends with him having some sort of telly-tubby inspired meeting of deathly diseases who all moan about how many people they’ve had to kill recently and then march off in their red, blue, green etc robes.

Poe, who’s work is referenced during the film, but as with all Corman’s Poe inspired movies, not very faithfully and the titles run.

I can't say I’d recommend this production very highly, even as camp. It’s slow and tedious and Price does seem to be phoning in his lines. The set design is pretty amazing and the size of the castle is well represented with minimal sets which sometimes shake a bit it you hit a wall too hard. This is one film that would greatly improve with a Mystery Science Theatre 300 treatment. I now some people really love this film and I can’t say I hate it but it doesn’t come close to the more inspired Corman adaptions like «Fall of the House of Usher».
Posted by Behemoth media at 8:32 PM

jervaise brooke hamster said...
This comment has been removed by a blog administrator.
November 5, 2013 at 5:20 PM