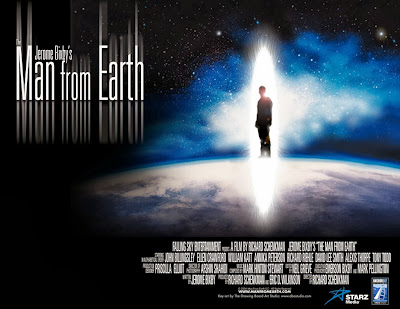 It’s rare to find a new film worthy of being a cult film but I think this film with it’s simple premise, intimate feel and interesting cast and history is one of them.

The writer, Jerome Bixby had been working on this idea for decades and completed it on his death bed. His son worked tirelessly to make the production happen. The story about a man who reveals to a group of close friends that he is possibly 14 000 years old is not the first time the author visited this material. In the 60s he wrote the Star Trek episode «Requiem for Methusleh» which covers some of the same themes. Some of the actors are from various later Star Trek incarnations, in fact, and the show evens gets a mention during the film.

The filmmaking is really well done, the low budget helps rather than hurts the production. The entire drama takes place either in or in front of a cabin in the woods. It never falls into a «filmed play» mode, but really squeezes out solid cinematography in a limited space. The lead actor, David Lee Smith gives a great underplayed performance. He has an emotional distance and quietness that sells the idea he might really be as old as he claims and there is a real honesty to the character. As he unfolds his story, at first framed as a science fiction he may be writing, it becomes more and more clear he believes it and more to the point, those hearing start to believe it as well.

The problems with the story are more things that bother me personally than maybe actually faults in the movie's structure. 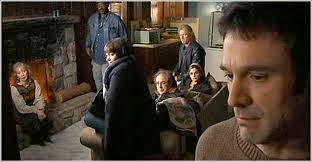 While the telling of story is fascinating, some of it’s details bothered me. The concept that he was «one man telling a story from one point of view, from the perspective of a single person only in one place at a time», is brilliant but somewhat sullied by a revelation that he may have been the inspiration for the Jesus Christ mythology. This is told in a compelling way and the objections of the obligatory biblical literalist friend don't feel forced. In the same sort of vein, the guests leave for the most part either believing or disbelieving what they have heard and even at this point, there is cause for us the audience to feel ambiguous as well. A compelling story is not proof of such an amazing claim. I liked that. Sadly, not everyone has left the party and while John is telling his soon to be ex girlfriend before he moves on (he leaves every decade or so for a new life as people start to notice he isn’t aging) and mentions one name too many. The psychologist who has been called in to assess John’s sanity recognizes the name as that of his father, a Harvard professor who left he and his mother almost 60 years ago. This is not thrown in willy nilly… in fact it explains why in his questions, he seems to be stuck on John’s impressions of fatherhood. Also, Dr. Gruber has lost his wife the day before and has brought a gun to the cabin. At first it seems like a test for John, then maybe a means to commit suicide and finally a possible reason might be he suspected John was his father all along and wanted to kill him. In a very well done shot, we are shown the gun actually has no bullets in it. This mystery is thankfully never solved as, upon having it confirmed that his father is an immortal from caveman times, he has a heart attack and dies (He was complaining of pains and tiredness throughout the film). Smith's characters is very affected by his death, but in a quiet, in character, understated way. He had to have known for years this man was his son and for some reason, chosen to be near him and risk exposure.

This revelation, though well done, is not an asset to the story, in my opinion. I would have preferred everyone (including us) leaving with their own ideas as to what has just happened and him deciding to give a little more time to the woman who loves him but he can never love the same way after losing so many people over possibly 14 000 years of life on earth. 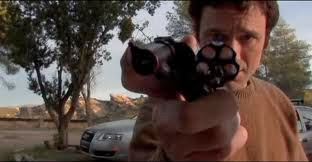 Posted by Behemoth media at 4:35 PM