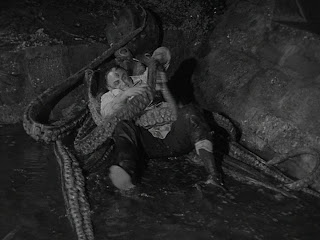 If you think that Ed Wood's era of low budget filmmaking and laughable rubber monsters died by the mid-60s, think again.

One stoned-out Sunday, I decided to watch the indie sci-fi film SKY LINE on Netflix because mainly it had sexy hipster Eric Balfour battling aliens.

The film cost up to $10 mil to make (mainly due to the CGI digital effects) which returned that investment sixfold with a world-wide take of $67 million.

Eric Balfour told interviewers how he became involved with the independently financed film directed by special-effects supervisors turned directors."I was invited to come down to the Hydraulx office. And the guys… We did a small reading and we went over a couple of scenes. Then they showed me the trailer that they had cut for the movie with their friends. They basically said, "So you want in?" After seeing the trailer I was like, "This looks amazing. I'm totally in."

Most of the action was shot in the high-rise condo where director/producer Greg Strause lives for $500,000. The visual effects in Post jacked the budget up to $10 million. The Brothers Strause say that they have a sequel in mind. They will do it with their own money if they have to and try to find a distributor after that. Somewhere Ed Wood is smiling.

In the true Ed Wood tradition, SKY LINE offer actors in a one-set, claustrophic setting (ie: a Hi-RISE in LA's Marina) due to budget limitations - as well as featuring crow-barred "emotional" moments for the cast to chew on - which is laugh inducing because they are on the verge of extinction but cannot get past their petty hangups. One actor has a rather noticeable and distracting speech impediment. While playing macho - he has to utter lines with way too many R's for him to handle. Oh, and the aliens are  brain-gulping flappy vagina monsters.

Best of all, Eric Balfour has a beat down scene with an alien monster on the rooftop that brings a flashback to Ed Wood's BRIDE of the MONSTER ("Just roll around with the octopus.").The CGI effects are decent - but unfortunately CGI (or in Ed Wood's case : stock footage) cannot do everything a director needs to tell a story, and a group of actors must always fill in the gaps. As we all know, this is where the real low-budget comedy comes in. Some things never change.

Don't Look Up (at the screen!) 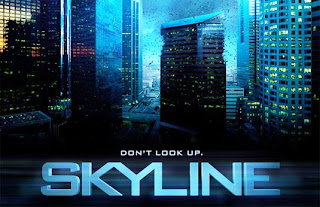 Posted by Pantheon Zeus at 4:54 PM

My fave moment in Skyline was when the annoying pregnant girl starts whining because someone is smoking a cigarette. This is, of course, after she's seen giant monsters and spaceships (spewing what sort of radiation I can't imagine) tearing the shit out of L.A.

Ooh! How exciting! I have to see this one. I love new bad movies.