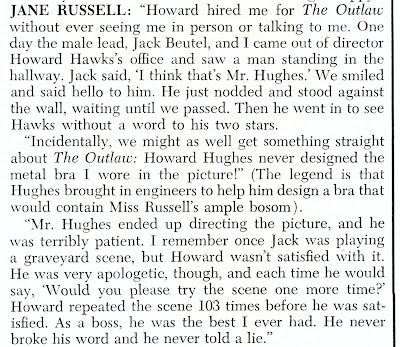 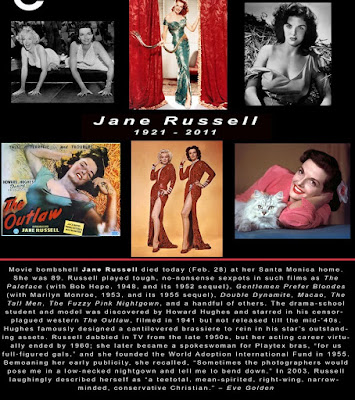 first clip from Ladies Home Journal article on The Women of Howard Hughes, 1972
Posted by Donna Lethal at 8:28 PM 4 comments:

This spoof sequel trailer is inspired. The Grey Gardens poster in Gertie's room was a nice touch - as is Neil Diamond's "heartlight" playing in Elliot's car.

PS --
Seeing that ET clip of the bike/moon on EVERY Oscar telecast makes me wanna vomit. ENOUGH !!! Besides, Spielberg needs to be told he's a dick for remastering shit. Victor Fleming didn't go back in 1949 and add "better" effects to Wizard of Oz because he could. The new bouncy CGI E.T. (circa 2002) looks even more dated now than the 1982 puppet/costume version.
Posted by Pantheon Zeus at 12:45 PM No comments:

Black History Album has a nice collection (albeit small size) of classic era movie posters starring, directed by, and often produced by African Americans, with many by Oscar Micheaux. I wanna see 'em! 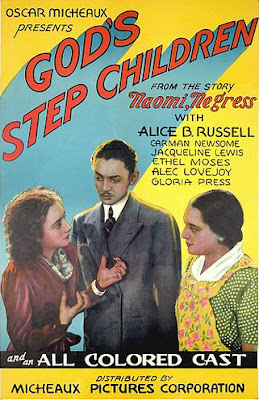 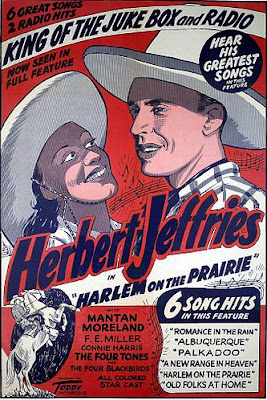 Here's hoping he makes this a regular thing.
Posted by Donna Lethal at 9:49 PM 3 comments:

I Am A Zombie

The only answer is "I am a Zombie"
Posted by glyphjockey at 3:43 PM 2 comments:

Email ThisBlogThis!Share to TwitterShare to FacebookShare to Pinterest
Labels: zombies

Back of the Head stardom

Before digital effects could place an actor's face on his body double - like in THE SOCIAL NETWORK where Armie Hammer plays the Winklevoss Twins - split screen effects were the best a twin sequence could get. An actor was required to play the star's twin via back of the head shots. 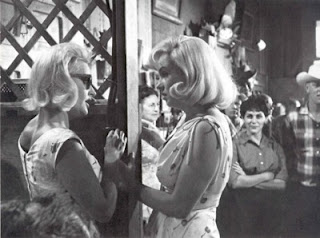 Some of the more famous body double celebrities who gave good head that I can think of -- are Evelyn Moriarty, once Marilyn's THE MISFITS stand-in, who later often doubled for Jeannie's evil twin sister Jeannie II. 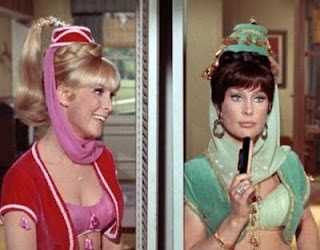 here is Evelyn and Barb 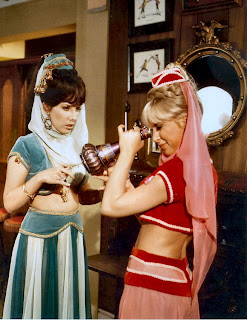 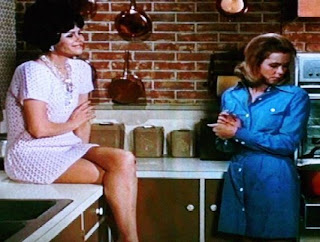 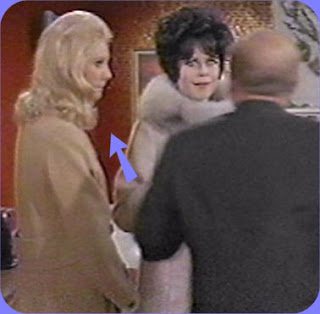 Like Evelyn Moriarty who made a career as stand-in/body double going from MM to Barbara Eden...Melody McCord went from her Extras Guild job with Liz Montgomery to working with Goldie Hawn. She eventually showed her real face on Falcon Crest as Melody the maid.

Finally, there is Susan Henning who signed a Disney contract promising to never tell anyone she was in the The Parent Trap. Years later, Henning told her tale on a special featurette in the Parent Trap DVD. Susan helped Hayley Mills adopt some American teen slang during their time together. 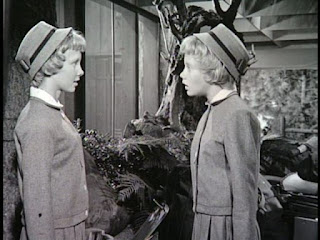 Back to this year's Twin body double star...Armie Hammer was paired with tall model Josh Pence (see below) to play his other half. 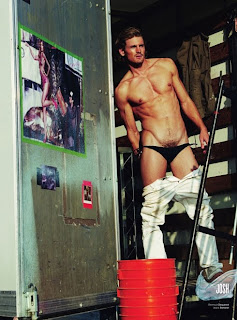 I recently stumbled upon photos of the Paley Center's 50th anniversary 2010 tribute to the sitcom My Three Sons. I was excited to see that Ronne Troup attended the event - to the surprise of her former co-stars (Her TV hubby Stanley Livingston hadn't seen her since 1977).

Ronne began her Tv career as a background extra on My Three Sons and Gidget. She made her film debut as extra in the all-girl ensemble film The Trouble With Angels (she is featured prominently in the graduation scene at end). 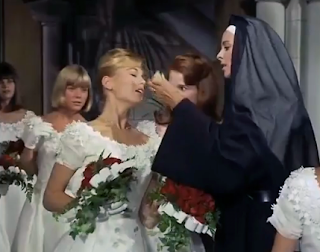 Ronne's dad was Route 66 songwriter and actor Bobby Troup and her step-mom was songstress Julie London - both of whom later starred in Emergency! 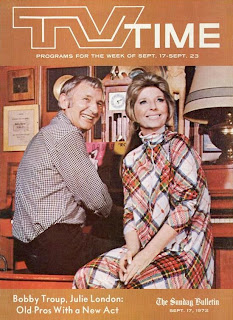 Ronne thought she was on the verge of her first TV starring role in 1967 when she was cast as the lead in Screen Gems' The Flying Nun. She had started shooting the pilot - but was bumped when Sally Field (the studio's first choice) relunctantly accepted the role. Sally's stuntman/showbiz vet stepfather Jock Mahoney told her that she better take the work because she might not get offered another part for years. Who knows...maybe the old cowboy was right? The absurd nun role made Sally a household name/joke - but she never stopped working after that, and her co-star/mentor Madeline Sherwood pointed her towards real dramatic training.

A year later, Ronne was eventally cast in a TV series - the kiddie-show serial Danger Island -(shown in syndication on The Banana Splits & Friends).

The damsel in distress role was a start - and besides, there are worse sights to see at a job than a gorgeous young/ often shirtless Jan Michael Vincent. 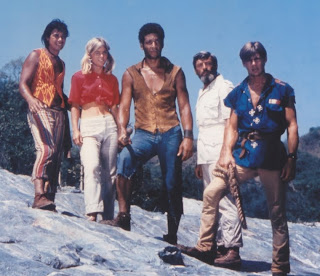 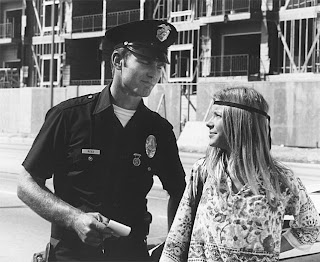 From 1987 to 1990, she portrayed "Barbara" on the CBS show, Knots Landing, and recently showed up on in guest roles on The West Wing and Cold Case. 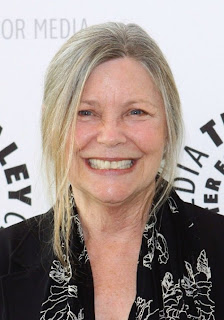 Email ThisBlogThis!Share to TwitterShare to FacebookShare to Pinterest
Labels: Back from The Past, My Three Sons, Ronne Troup

I am moving back to my hometown after being away for many years. In the process of packing I've come across many photos, articles and mementoes that has gotten me feeling a little nostalgic. That's why I'm blowing the dust off the first feature length movie I made, SMOKE CRAZY. This movie was shot back in 1990 and the re-edited into a short in 2005. I present the short to you all today, so pull up a comfy chair, butter some popcorn, and please enjoy our feature presentation. If you have trouble viewing the movie here you can link to it by clicking on the title. 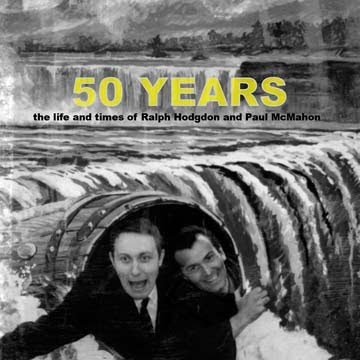 My documentary "50 Years" is now for sale at Amazon.com! I am preparing a second film about the old "1270" dance club to be sold there as well. In case any of our more creative members don't know, amazon now has a "createspace" site for writers, musicians and even film makers to put their stuff out there on Amazon. It doesn't cost anything but the time it takes to prepare the materiel, which in my case was substantial as I went from standard def to 16;9 format and added animation set to make the project a little more professional looking.

I started to watch The Rabbit Trap recently (had to stop - too much like life) and was confounded by who played Judy, the kind-hearted secretary. She has this permanently serene countenance, and I couldn't put that vibe with the whoshewas thing. But it was eatin' at me.

It turns out it was June Blair, who later married the recently departed David Nelson, who, it turns out, was no slob because he got himself a Playboy Playmate of the Month! (January 1957) So, since it bugged the crap out of me, this post, to exorcise the brain imprinting.

The internet being what it is,if you follow the links above and here and here you can know more than you ever wanted to about good ol' June Blair,, unless you were an avid Ozzie and Harriet fan. 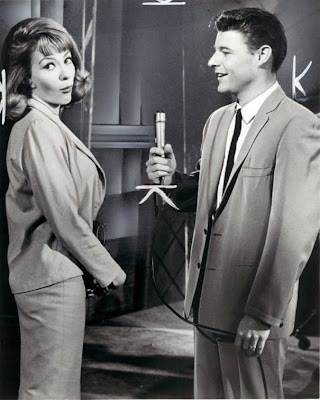 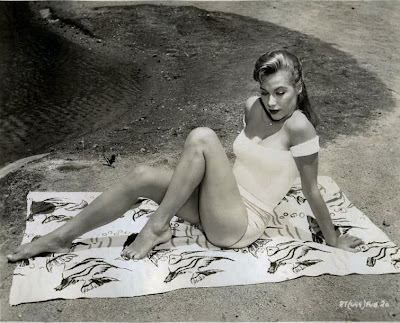 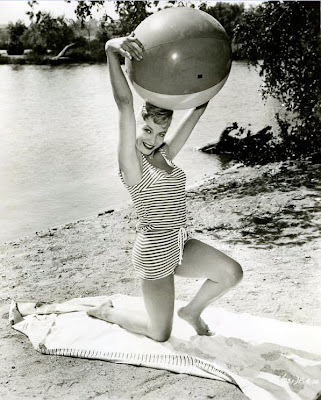 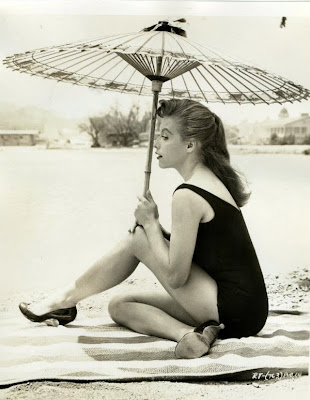 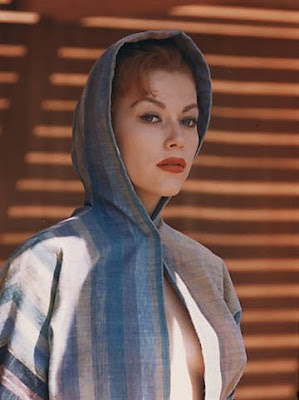 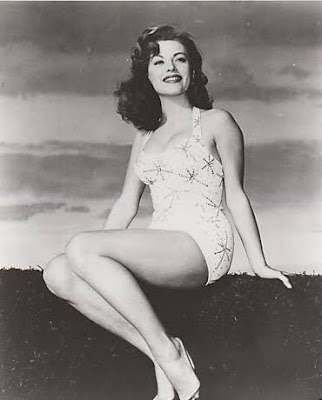 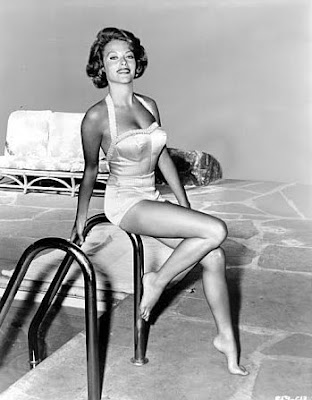 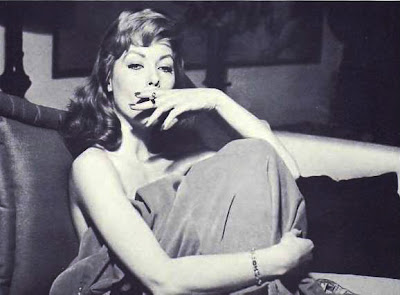 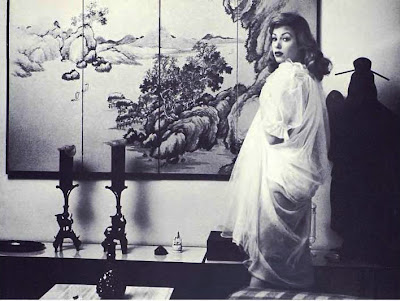 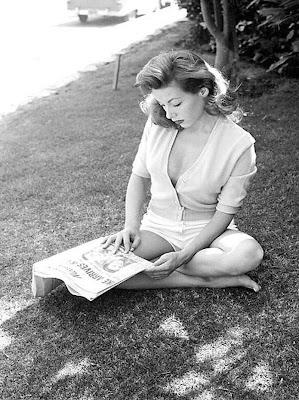 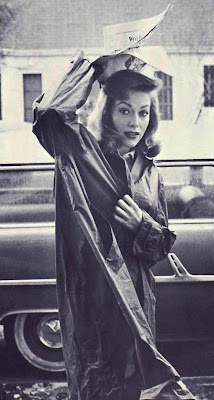 Posted by glyphjockey at 1:47 PM No comments:

A Kiss for Valentine's Day

Kelly gets what's coming to her, adjusts her wig and moves on! Sounds like just the way to spend VD. Yep, I'm cynical!

Yin and Yang of Mr. Go

This is on one of my PD Roku channels. I can't even begin to describe it.

Posted by Donna Lethal at 9:07 PM No comments:

Most of the ones I could find - except last month's- duhhhh..... it has June of 2011's though, so we got that goin' for us.
By clicking on any pic it will take you in a separate tab to a bigger version.
All Hail Celluloid Slammer! Huzzah!

Posted by glyphjockey at 4:48 PM No comments: 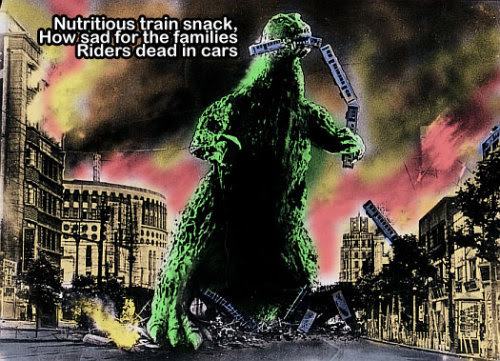 Posted by glyphjockey at 5:11 PM 3 comments: 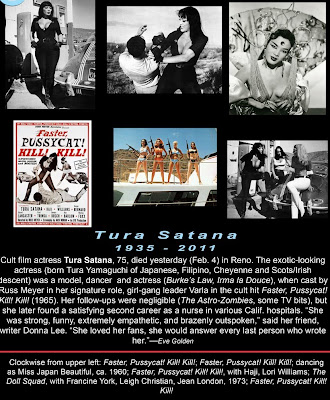 What can I say?
yes, Lee is short for Lethal.
Posted by Donna Lethal at 7:43 PM 4 comments: