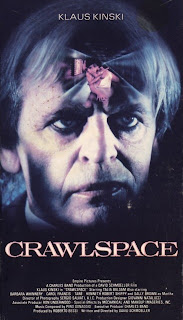 Klaus Kinski was obviously close to the end of his life when this absurd late-eighties horror hack job was put together. Directed by David Schmoeller--of Puppetmaster fame--it's the story of Dr. Karl Gunther, a former Nazi Officer hiding in urban America that still can't resist the urge to stalk and torture.

Gunther owns an apartment building that's wired and booby trapped to the hilt. He spies on his young female tenants by cavorting the air ducts, gazing at them through the vents, sometimes releasing rats into their rooms by remote control. He has headquartered himself in the attic with his Nazi propaganda films, torture device collection and a small, pasty Boo Radley-type boy trapped in a cage (?). As each tenant catches on to his wiles Gunther offs them with one of his toys.

The best scenes occur after each killing when Gunther ritualistically plays Russian roulette in his kitchen as a sort of haphazard penance. If the pistol doesn't blow his brains out he smirks in that diabolical Kinski way. Fate will let him continue; that is until one tenant played by Talia Balsam (of Mad Men fame) engages him in a fast-paced air duct chase that will blow your mind.

Tough to find a trailer for this one but there is a very fun short film made by Schmoeller regarding his experience working with the ever "difficult" Kinski. It's named after the motto incessantly repeated by the shooting crew throughout production: 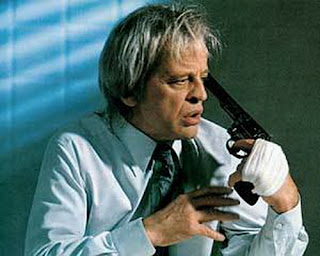 Posted by Mr. Sophistication at 9:50 PM

I'm sure I saw that one years ago but I have only the haziest recollections of it. I'd love to see it again.

Available on Netflix on demand!

I see you're from NSW. I was stuck in Newtown, outside of Sydney, for a while. St. John's College. Not sure if Crawlspace is available in your region.

I loved K.K. in "Aguirre, the Wrath of God," especially the scene in which he starts babbling to a pooping monkey he has in his clutches. Werner Herzog loved to show crapping animals for some reason.

i just added you, cos you have a nice blog.please come and check my blog and if you like it please add and follow.
http://psychedelicbaby.blogspot.com

I often see an old Russian in Malden who looks like Nosferatu, but he looks like the 1920s version, not the K.K. version.