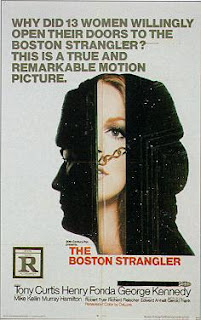 So Tony died yesterday at the age of 85. Most people remember him from movies like Some Like it Hot, The Defiant Ones, and Spartacus. I was always a fan of one of his lesser known roles as Albert DeSalvo, the title character in the 1968 thriller The Boston Strangler. It was a stark film based on the real-life serial killer. It used that very 1960's split screen panel effect to show different character perspectives at the same time, mostly his victims vs. the detectives that were hunting him. There has always been speculation that DeSalvo wasn't the real killer. Regardless, Tony played it super straight and reserved and it still holds up in comparison to today's rock video style slasher pics.

Miss Lethal, weren't you a couple of degrees of separation from Albert DeSalvo at one point, something to do with your hairdresser's boyfriend being DeSalvo's nephew?

She did live in Boston, so did I. It wasn't until years later I found out I lived in an apartment where he killed one of his victims.

Curtis will always be Sydney Falco to me.
I haven't seen the B.S. since it came out in '68, it did scare the pants off me as a nine year old though....

Mr. Sophistication, did you ever experience any unexplained phenomena when you lived in that apartment?

Jim-Jim, just really high rent considering the roaches and lack of windows to the outside.

I loved his performance in The Boston Strangler as well. And he was superb in Sweet Smell of Success, one of the best late entries in the classic film noir cycle. A very underrated dramatic actor.

I can't comment on the connection here but many close to the family believe that DeSalvo was not the actual killer. While certainly a B&E man and probably a rapist, he didn't have the wiles to commit the crimes, and his lack of brains is what led his to confess - he wanted the glory.

Has anyone here seen a Tony Curtis movie called "Johnny Stool Pigeon"? It has Shelley Winters in it, and it's supposed to be pretty good, but I've never caught it.

Donna, I mentioned it but I wasn't going to really get into it in this forum. I agree that there were too many questions regarding his conviction.

Jim-Jim, I haven't seen Johnny Stool Pigeon. I don't know that it's ever been released on video.

An ex Boston cop said the killer played on houswives'
fear that their husbands would be mad if they didn't let in the "repair man that your husband scheduled."

No kidding! And after that, every repair man got grilled and had to show picture ID, which is a good thing. I knew a few repair men who doubled as B&E men.

Donna, if I had known you while I was living there I would have had a much better time. Probably would have gotten a better education as well.