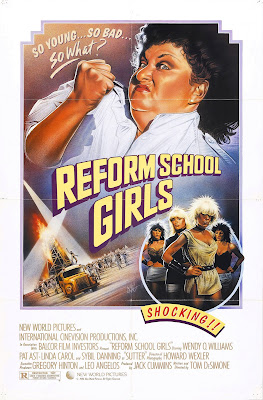 When naive Jenny is incarcerated because of her involvement in a shoot out, she becomes the latest victim of the an all girls reform school/prison run by evil Pat Ast ( of the Andy Warhol fame) and Sybil Danning, who is usually an inmate in these type of movies.

No cliché is left untouched and the addition of Wendy O’Williams from the Plasmatics as one of the girls (she looks closer to 100 than under 18.... how long can you be in reform school anyway?). There’s the good counsellor, the mentally unstable innocent and tons of young girls in naked shower scenes. Where most of these films see inmates getting a drab jumpsuit and a toothbrush with a razor hidden it, this flick introduces the idea that Frederick’s of Hollywood should be outfitting our teenage prisoner system offenders. I have to say, I agree totally.

The dialog is tasteless and ridiculous. «Keep you hands above the sheets, we only clean them once a week!» and «Someone get me a towel» after the evil warden stomps a kitten to death (No, seriously, she does). The theme song by O’Williams, «So young, so bad... so what» is priceless and at the end good old Wendy gets to drive a flaming bus into a tower.

All and all a slammer classic! I have to admit my glowing opinion of the his film might be coloured by the fact I saw it in Revere (ask Miss lethal about Revere) with a gang of about 20 loud lesbians who scared the crap out of the other 10 people who came to see this cinematic masterpiece. We all dragged raced in the parking lot after.

Posted by Behemoth media at 5:20 PM

One of my all time favorite movies. Nothing like Pat Ast and her mantra - "COMPLETE CONTROL!"

The only thing missing from the movie would have been Tawny Kittan.

Apparently Wendy O was very disappointed in the film and it just added to her reasons for suicide. I don't know what she thought the was going to be... "citizen kane"?