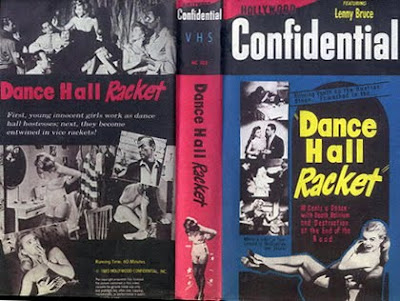 Written by and co-starring Lenny Bruce, this is one for the off-center archives. Lenny's wife, Honey, appears as one of the floozies. It's about a dance hall run by our hero, Umberto Scalli, the sleazy sub-mob gangster character previously established in the female wrestler pic, Racket Girls (both films were produced by George Weiss of Glen or Glenda fame). Lenny plays the sociopathic henchman, Vincent.

It all starts with a federal agent telling the story in flashback. The club follows the standard tradition. The gents buy a ticket and get a dance with a lady. If they're a real big spender they buy the "Trip to Hawaii" which consists of a little private time behind a potted plant provided by the bartender. Scalli pulls his money in tickets, and in shady fence deals. Vincent is his main fist, a not-so-convincing knife-wielding maniac (Lenny was much more effective as a comedian). There's lots of footage from the dancers' changing room. Sometimes it's an audition for a new dancer, sometimes just a friendly exchange between the gals, mostly while they help each other "dress." Once the racket is exposed it's curtains for Scalli and his accomplice, Vincent.

There is a somewhat touching, albeit sleazy, scene where the bartender asks one patron why he buys so many tickets but never trades them in for a dance. The man explains that he wants to horde a thousand of them, then take the club for himself for a night. All the ladies' eyes on him. Lots of trips to Hawaii.

Horrible print and sound, and one of the worst transfers I've ever seen, but I love Lenny Bruce and this is a little piece of history.
Find more videos like this on video.filestube.com.
Posted by Mr. Sophistication at 12:09 AM

The heck with Lenny Bruce--any film with the great Timothy Farrell as Umberto Scali, and I am there! When is someone going to release The Umberto Scali Trilogy (Dance Hall Racket, Racket Girls, The Devil's Sleep) on DVD?

The Devil's Sleep? I love that Umberto Scalli. It's not on Netflix, is it worth buying?

ANYTHING with Timothy Farrell in it is worth buying.

I'll check it out.