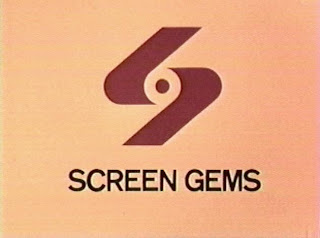 The "S from Hell" is what some kids called the Screen Gems logo which closed 60s/70s TV shows like The Monkees, Bewitched, I Dream of Jeannie and The Partridge Family.

Some kids were spooked by the strange music played while the dot in the middle was approached by menacing lines.

There is a short film at Sundance about this childhood fear.

Personally, I never feared a damn logo as a kid - I would have watched a beheading as long as it followed my beloved Samantha and Jeannie and Flying Nun.
Posted by Pantheon Zeus at 4:57 PM

That's just as nutty as a fruitcake! Those kooks better not come to Wilmywood-the airport is right down the road from....SCREEN GEMS STUDIOS, taunting them with their giant logo on the soundstage!

Hell, I thought Screen Gems was an much more recent branch of Sony Pictures.

I used to say "Zis has been a Filmvays presentation, dahling" out loud at the end of "Green Acres" along with Eva Gabor . . .

There wasn't much that scared me as a kid.