I Need This Movie NOW! 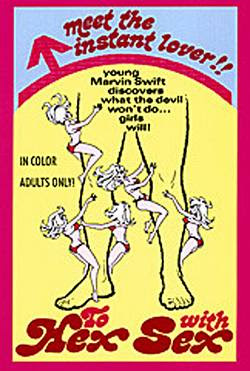 Shy and awkward, Marvin Swift loses his job at an underwear factory and bungles lovemaking with his girl friend. He becomes locked in the boiler room of an apartment building, and there Lucibel, who says she is the devil, promises to grant him any wish. He becomes the head of a company that makes sex exploitation films. But he hasn't lost his awkwardness; he becomes excited by the simulated sex and stumbles over the equipment, wrecking the set and losing his actors and production crew. Marvin next wishes to become irresistibly attractive, and he agrees to give Lucibel, in return for granting his wish, exclusive rights to him for 6 months. He is overwhelmed by her demands upon him, and he finally trades his soul for everlasting youth--believing that his immortality will prevent her from collecting the debt. He begins to enjoy his newfound freedom and goes to a party where he is accosted at once by all the women in attendance. They follow him into the bedroom, shed their clothing, and begin to tear at his clothes...


I actually found it on TCM while looking for info on Larry Crane.
Posted by Donna Lethal at 11:32 PM

Sounds like a cross between "Bedazzled" and "The Love God?"! WE must watch this one together if we ever find it!

Usually cinemageddon.org has out of print flicks, but this one's so rare they don't have it. Sounds like a fun romp though.

Sorry, I found it on TCM's website. For sale!