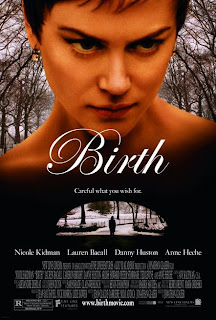 It’s not horror. It’s not necessarily a thriller. It kind of transcends the genre of drama. It makes perfect sense.

Nicole Kidman plays Anna, a Manhattan socialite and widow of ten years that is preparing to remarry. The fiancé, Joseph, is played by Danny Huston. All is well until a young boy with the same name as Anna’s dead husband starts hanging around her apartment building. Given the opportunity young Sean explains to Anna that he is the reincarnation of her deceased husband.

Anna is already secretly struggling with the transition from one marriage to another and this Sean kid doesn’t help. Her emotions range from angry to confused. Ultimately she entertains the notion of letting down her guard and falling in love with the ten-year-old version of her dead husband (see the very creepy resulting bathtub scene with Anna and the boy).

The whole family, including Anna’s mother (played by Lauren Bacall) and the former in-laws (Anne Heche and Peter Stormare), think she’s lost the proverbial plot. Joseph begins to show his own true adolescent colors as he flies into one childish rage after another in a fit of anger/jealousy over his fiancé’s dalliance with this working class schoolboy. Anna couldn’t care less. She’s busy discussing the logistics of sex and romance with young Sean over ice-cream sundaes.

Jonathan Glazer (Sexy Beast) takes some great chances. In the first act, right after the big reveal, he lays in a shot of Kidman as she’s sitting in a concert hall, supposedly enjoying a show with her fiancé. Instead we get a two minute close-up of a very startled woman. This one continuous shot could be my favorite Kidman performance of all time. The production design is both rich and muted. Glazer’s wintertime in New York isn’t cinematic in a typical sense. It’s dirty and cluttered. The whole movie has a yellow tinge that adds to the ominous tone.

The key to understanding the unique beauty of this twisted little film is to defy the typical moviegoer propensity to focus on the star power. The real story in Birth is with the supporting cast. Mainly young Sean. Once you get him, you get the movie.

Posted by Mr. Sophistication at 1:39 PM

I thought the film was lovely - New York in winter looked magical.

Nice exploration of grief and longing for a supernatural comfort
(good companion film with the Spanish THE ORPANAGE film which explores a mother's grief over loss of her son).

Nicole could still emote then too - her face wasnt frozen solid.

I've always had a crush on Anne Heche. What can I say? I'm hot for crazy.

I'm a big fan of this movie and it's nice to know other people get it. It was a pretty big bomb in the US.

"In the first act, right after the big reveal, he lays in a shot of Kidman as she’s sitting in a concert hall, supposedly enjoying a show with her fiancé. Instead we get a two minute close-up of a very startled woman. This one continuous shot could be my favorite Kidman performance of all time."

Agreed! She is simply amazing in this film and one way to read what happens is that the entire film is her dealing with a fear of commitment/marriage as she still has feelings for her previous husband.

What I like is that they don't make new beau a complete monster. He's pretty patient and understanding all things considered and it's amazing that he doesn't blow up sooner than he does.

This film is also beautifully shot and reminds me of Kubrick in its stateliness. I always felt that BIRTH was the best Kubrick film not made by Kubrick.

anne heche is WAY adorable in THE THIRD MIRACLE...check it out.

I think the Kubrick connection is apt. I'm a fan of his work as well.

Okay, adding this to Netflix! I've always liked Nicole since she played naughty teacher, Suzanne Stone, in "To Die For" and combined with La Bacall plus a Kubrickian vibe,I'm sold! On a totally superficial note: LOVE the Mia pixie 'do!