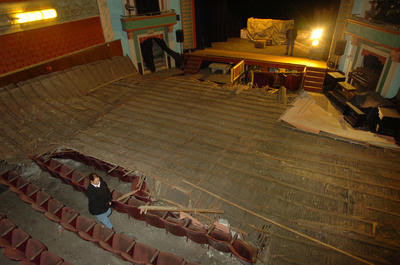 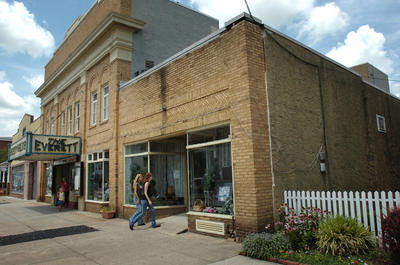 Many here in the slammer are old enough to have had the pleasure of going to the local movie house when they were kids. I am not talking about second run art houses... just local movie houses, converted from old stage theatres usually that seemed to be in every city and town when I was young.

I grew up just outside of Boston in a horrible little town called Everett. Want to know what Everett was like? Just watch «Blue Velvet» and add 1000 Frank Booths and a few more girls dancing with snakes on cars and there you have it. We did, however, have a local movie house.

In the 60’s growing up, this place was a haven from all the horrors of this little «mid-burb» as another Everett film maker, Zack Stratis, called it.

For 50 cents, every weekend there was a double or triple feature that included short films and even old serials. I actually first saw the Flash Gordon serials starring super hottie Buster Crabbe there. I went to every Godzilla double feature. I particularly loved "Godzilla versus the Smog Monster", which I have to mention because I can then show a clip of the go-go number it started with. Buster Crabbe and go-go dancing in a Godzilla movie, no wonder I ended up the way I am!

In any case, these small locally owned movie palaces were like drugs to young kids like me. It was our introduction to film in many ways and we got to see them in a real theatre, with a real audience. Sadly, kids today won’t have anyhting close to to the same experience. They have the ability to carry these films around on their phones to watch whenever they want, something we would have killed for back in the day, but that ability would never have stopped us from going to the movies every weekend anyway. Discovering new films, good and bad and sharing the experience.

The Everett Park Theatre was destroyed.. torn down to make some of the ugliest (even by Everett standards) condos ever seen. I am sure the city gained some tax revenue, but it lost a lot more.
Posted by Behemoth media at 7:19 PM

All the local movie houses were already condemned/closed in downtown Lowell, MA by 1975.

We had a small (compared to today's cineplexes) RTE 3 CINEMA with 4 cinema screens (and by 1980 they added 2 smaller ones) for a total of 6 screens.

All my summer blockbusters from 1977-85 were seen there. Today, it sits empty still looking for a buyer to demolish it and use the land.

I can still recite the weekly updated phone recording that listed the films & showtimes.

We also had the nearby Chelmsford Twin DRIVE-IN theater - it cost $10 a car load.

we went to drive-ins too. In summer we went to the one in Wellfleet on cape cod.. It might even still be open!

Amazing. And profound. We had to be content with watching movies projected onto a trampoline in the Village Hall. I vividly remember sitting between the Vicar and an alcoholic widower watching "The Elephant Man" and asking myself "Is this what it's like to be a weirdo?".

Bittersweet story! I've NEVER been to a drive-in! (or I guess I have, but I was too young to remember) and it's on my "BOUQUET list"! I was a total suburbanite kid, and our movie house was in a shopping center. We still had double-features, cartoons, and short docs. Sigh! Kids today will never know.
Arthur:the answer is "yes"!

They can have it for a saucepan lid, Vincent! I did see "The Man With Two Brains" at a drive-in near Lake Huron a couple of years later. And a movie with Magnum in it. But it was too late.

I grew up in Weymouth. In Quincy was The Strand. Run-down probably from the second day it opened, but it was a fantastic place. I saw so many of the classic gritty 70's movies there growing up.
It's been a parking lot since it was torn down.
The Plasmatics were banned by Quincy from playing there in the 80's.

Oh my god, I have to see this movie!
Yep ... Mark and I grew up at the Rte 3 ... and I also had the495 Drive-In in Tewksbury for great horror triple features.

go-Go'JiRa watch 'im go GO GO!
We got a better,more rounded out film education..When I was in my early teens I lived in a fairly small town in Oklahoma with two downtown Theatres..and thats where the kids my age hungout at night..probably more to smoke cigarettes out in the lobby and look for girls..But we saw everything..stuff we wouldn't have seen if we had the choice of a multiplex or video..and we came to appreciate alot of this stuff..Willy wonka,Hello Dolly,Ryans Daughter,the Trinity movies..a hodgepodge of stuff..and as cool as we thought we were we would memorize lines of dialog from corny movies or songs..You learned to like stuff...kinda like being forced to eat a vegetable you think you're gonna hate..
a little later when I moved to Dallas and got a Car..the Drive-in was always the place to go cuz it was the cool thing to do ..even if all 5 of the movies sucked!

Donna.. I have it on DVD after years of searching and the song is only in Japanese! Even in the engish translation! I was so dissappointed! Thank the gods for YouTube!

Vincent, I need it! And oh, I remember the Wellfleet. I spent two weeks tormented by tanned Wellfleet WASPs.