Land of the Lost teen idols 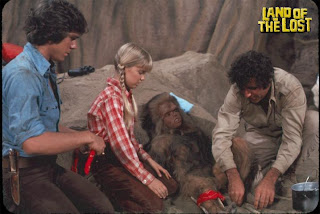 Wesley Eure is gay. He just came out in the press. No surprise for those of us who have seen him in West Hollywood bars or at big gay barbecues. He is a good guy.

He is such a genuinely nice fellow that I am pissed at the thought of those Viacom twerps treating him like crap at this year's TV Land Awards. They invited Butch Patrick, Johnny Whitaker and Wesley Eure and Kathy "Holly" Coleman to the TV Land Awards for the Krofft tribute -- then hid them from red carpet and sat them in the nosebleed seats. WTF ?!! TV Land is a celebration of stars/shows from the past, correct? Such shitheels. A 3rd Krofft brother Harry Krofft and his wife were also stuck up there in the rafters. Shameful.

Wesley tells all about the TV Land debacle and how he and "Holly" were cut out of the final version of the new Will Ferrell film vehicle. Good news: He and Chaka (Phillip Paley) were invited to the film premiere and party. Bad news: but not Holly (Kathy Coleman). Execs apparently thought she was too much of a wild child to attend. Assholes.

AE: Do you still have the gold chain?
WE: It was stolen from my house. I used to throw a lot of big parties. Everyone would be there. I had a ranch and stuff and the Pointer Sisters, Travolta, everybody would be out at the house. We'd have huge barbeques. But anyway, somebody walked into my bedroom one day and stole it.

I loved this interview. And he was Richard Chamberlain's boyfriend!

that was a great interview.. he needs to hire me to re-do his website though... its terrible!