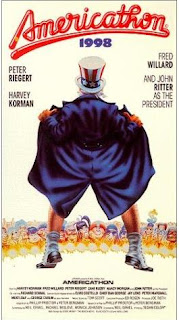 An Americathon !
The film was released in Summer 1979 and grossed $6 mil - a flop compared to that year's comedy hits: Steve Martin's The Jerk which grossed $42 mil and Blake Edwards' sexy funny "10" which made $37 mil.

In the future (the distant year of 1998), the United States of America is in crisis. The oil shortage has grown to epic proportions, leading to people living in their cars and bicycling to work. Cigarettes and meat have been outlawed, gold coins are needed to operate common household appliances, and the Western White House (located in a luxury apartment in California) has been forced by economic necessity to operate round-the-clock tours for vacationing Chinese citizens.

The economy is deep trouble; President Chet Roosevelt (John Ritter) has borrowed four billion dollars from Native American tennis shoe ("nike") manufacturer Sam Birdwater (Chief Dan George), and he's foreclosing on the loan. When a media expert, Eric McMerkhin (Peter Riegert), is summoned for advice (since despite all hardships, Americans refuse to give up their televisions), he suggests a telethon.

Despite terrorist attacks and the kidnapping of President Roosevelt, the patriotic spirit prevails and American citizens dig deep and pledge their gold to the cause. This outrageous farce (based on a play by Firesign Theatre alumni Philip Proctor and Peter Bergman) features cameos from Elvis Costello, Jay Leno, Meat Loaf and the Del Rubio Triplets, and is narrated by George Carlin. The Beach Boys, Eddie Money, and Nick Lowe contribute to the musical soundtrack.
_____________________

The film is directed by Neil Israel ("Bachelor Party") and apparently has its zany moments despite the layers of dated flat material. Harvey Korman fares well as the meglomaniacal Monte Rushmore.

* The People's Republic of China embracing capitalism and becoming a global economic superpower.
* The collapse of the USSR.
* Terrorist attacks on US soil
* An America with a devalued dollar and heavily in debt to (foreign) lenders
* Cliques of Native Americans becoming wealthy (although in reality much of their wealth would come from the gaming industry, mostly from tribal casinos).
* Nike becoming a huge multinational conglomerate (In 1979, their "Tailwind" running shoe was just starting to gain popularity).
* Vietnam becoming a major tourist attraction among Asia's wealthy and powerful.
* The depletion of US crude oil production.
* The Beach Boys still being popular in 1998.
* Jogging suits becoming acceptable daily casual wear.
* A panhandler asks for "$25 for a cup of coffee" - predicting expensive specialty coffee.
* The televised boxing match between a mother and son predicts reality television
* A Presidential family dynasty

Holy Zeus! I had forgotten all about this one, and with one of our Celluloid saints - Harvey of Korman! We must have a viewing soon.

OH! I'm off to Netflix right now! WHAT a cast! Perfect timing for a dusting off. Who cares if it's dated?!

Wow! I didn't know all of this. I've never seen this movie before. Maybe it should have been made required viewing so we might have avoided all the trouble we are in now.