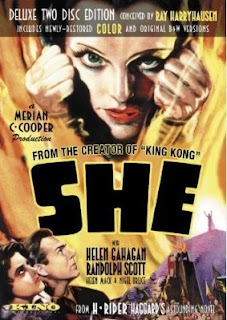 Some later versions of this film were called “She Who Must Be Obeyed” and don't think I am not designing myself a T-shirt saying that as soon as I finish writing this!
Posted by Behemoth media at 8:24 AM

It was really great! I ove the style of old effects films... the current cg trend just doens't invoke wonder like and old style effect does

I saw a documentary on Cooper and he really was a fascinating guy.