Let's talk about something relating to Arthur's earlier post about ventriloquist dummies- a recurring dream that occurred during my early childhood, the progenitor of which was the movie Dead of Night seen on television. What the fuck was my family thinking?!?! I was wee !!

It scarred me because prior to seeing it, it loved ventriloquist dummies, because it was a toy that came to life. But after Dead of Night, I knew it could all go wrong.....seriously, biting you wrong.

Well, here goes, here's the dream: I'm in my living room, playing with probably some Marx brand toys, when Mortimer Snerd enters the room. (Pretty sure that Mortimer was based on John Finnegan, the son of my Mother's friend, who was, in retrospect, a half-wit, and spent about 95% of the time I was sequestered with him beating on me, based on meaningless unconnected premises.) 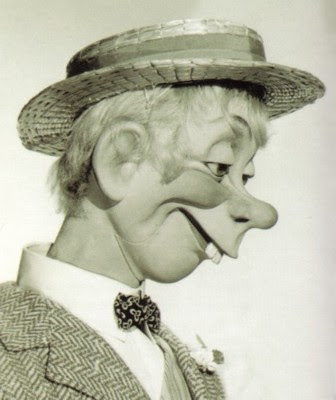 Snerd- that fucker....
He approaches me in an attempt to bite me, in my mind, to death. I try to run but can't - it's all slow motion. Molasses. Anaerobic. Occasionally, during recurrences, I make it to my parent's room, but they do not wake up - it's like they're drugged and as a result I'm pretty much fucked - let Mortimer's biting commence. Once he's in bite proximity, everything swirls into a negative ecstasy of terror approximating the opposite of nirvana, and I wake up in a little tiny kid cold sweat, chest pumping, anxiety populating every breath of the air I gasped.

So, uh, here's the segment from the film in it's entirety. I used Google Video, because YouTube's weak ass policy states 10 minutes or less, and this runs about 23, so I'd've had to bust it into 3-

I love Dead of Night. It's one of my favorite films, although the part that terrifies me most is the "mirror" sequence (oh, and the dead boy Francis whose sister is cruel to him!)

But I hear you with dummies. They are frightening.